Harry and Meghan have had hostile relations with the UK press since they announced their engagement and both have filed lawsuits against British media publications in recent months. The Duchess of Sussex, in particular, has been the target of a bullying agenda. This has particularly infuriated her husband, who blames the press for the death of his mother, Princess Diana. He and his wife prefer to connect directly with the public through social media.

All of this shows how much our world has advanced in terms of technology, as well as how much the ways in which we communicate have undergone a huge transformation. 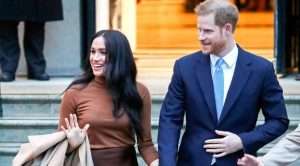 Back in the Day

In times past a letter could take weeks to arrive depending on the destination and phone calls were for many a rare and expensive last resort. Faster methods such as telegrams had severe limitations in terms of text and were even more costly.  These were the only means by which people could make contact with one another and many who are no longer alive would be truly amazed if they could see the options which are open to us now.  Indeed it might be hard to explain how some of them operate.

Sadly there are some amongst us who can feel baffled, bewildered and even left behind by all this progress. Not everyone benefits immediately from innovation.  I have heard one elderly person lament that no one ever answers a phone anymore.  The automatic phone message which offered a menu of various buttons to different sections left her thoroughly confused and she had to ask a relative for assistance.  Others say they miss getting letters and letter-writing itself, which was once considered an art form, is no longer deemed as necessary. 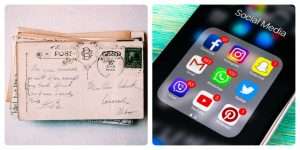 Certainly, people do ‘interact’ with each other online.  News headlines and celebrity gossip reach millions of people in seconds on Twitter.  People share their lives with friends and family on Facebook.  It is a huge advantage for those with loved ones living in far distant countries to be able to access voice and video through the medium of Skype.

However, it has been argued that spending too much time online is partially crowding out other leisure activities which means we may be having much less real-life social contact.  Relying solely on technological sources can be harmful.  It does not allow for the individual touch, the sense of community which is essential to our experience of being human.

I am always fascinated when I observe people in restaurants chatting, not to their companion at the table, but on separate mobile phones.  Certainly, it can be disconcerting when the person you are out with for the evening leaps suddenly to answer a call cutting you off mid-sentence!  Sometimes too much ‘communication’ dilutes the value of the time we spend with one another and distracts us from those we are supposed to be engaged with at that particular moment.

Other people have lamented the fact that it is rare to see children out playing anymore, one of the reasons perhaps for an increase in the problem of child obesity.

Sadly cyber-bullying has become a well-publicised cause for concern.  Children who are tormented in this way are likely to experience anxiety, depression, disturbed sleep, and loneliness. 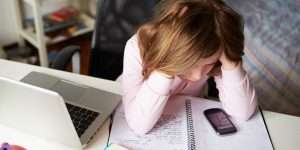 Loneliness is of course part of being human.  Jesus experienced it in Gethsemane when his disciples deserted him.  All of us choose to be alone at certain times in our lives but loneliness is the feeling of being disconnected from others without a choice.

There is a danger that the developments in technology have put us more in touch with what is ‘occurring’ in other people’s lives without being ‘connected’ to them, whereas the principle cure for loneliness is ‘connection’ both with oneself and others.

It would indeed be both sad and ironic to arrive at a place where we have advanced so far in the ‘science’ of communication that we have lost sight of its real meaning – the ability to be present in a deep and meaningful way and to support one another on the journey through life in a manner that truly reflects Jesus’ intentions when he told us “to love one another”.