Is it better to suffer injustice than do it?; is it right to put truth above your needs and the bodily instinct to survive?; is it wrong to think that a caring God would condemn a man for signing a piece of paper when he knows what is in his heart?

This week I went to see the movie A Hidden Life, directed by Terence Malik, which tells the true story of Franz Jagerstatter, an Austrian farmer and conscientious objector, who dared to defy the Nazis, and went to the guillotine as a consequence.  After the Anschluss, which refers to the takeover of Austria by Nazi Germany on March 12, 1938, Austrian soldiers when called up were forced to take an Oath of Loyalty to Hitler.  Franz refused to do this, resulting in imprisonment and finally execution on August 9th, 1943.

A Hidden Life is more of an experience than a film, and it remains in the memory long after viewing.  There are uplifting scenes of breath-taking beauty but also, in the second half, scenes of cruelty, violence and harrowing inhumanity which are very difficult to watch. 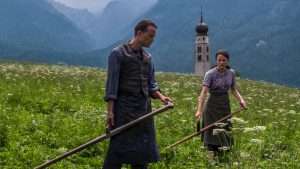 Franz and his family were poor and lived a simple life, but it was in its way idyllic.  Particularly so because of the love he and his wife Fani share.  Their bond is both tender and strong, and whether working the land or playing with their three daughters, every moment is filled with joy.

Their animals are part of this pastoral scene and the kindness shown to them by Fani contrasts sharply with the Nazi treatment of the prison inmates later in the film.  The two worlds depicted could not be more different.  We see this powerfully illustrated when Fani gives a poor woman her vegetables, and Franz gives a starving prisoner his bread.

The beautiful South Tyrol scenery provides a perfect backdrop and an answering echo to Franz’s words, “I thought we could build our nest…above the clouds”. 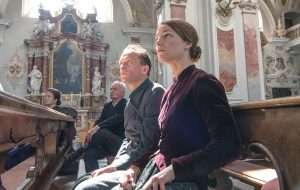 Very early on the Religious motif is established when we see Franz sweeping the church.  There are images of Christ on the cross everywhere; on the mountain roads and even in the local tavern where the villagers gather to drink and dance.

When Franz becomes increasingly concerned about what is happening to his country he talks with the priest, who is a sympathetic character.  However, neither he nor the Bishop take any ethical stance with regard to the Nazi regime, nor are they supportive of Franz’s decision.  The priest tells him his sacrifice will benefit nobody.

A conversation with the artist painting the ceilings of the church is of particular significance because it points to a theme which lies at the heart of this film.   At one point he says, “I paint the comfortable Christ, with a halo on his head…Someday I’ll paint the true Christ.”

The first part of this film is interspersed with newsreels of Nazi Rallies and Hitler, which help to locate us firmly in the threatening atmosphere of the time.  We often hear the sounds of the Nazis shouting in the background, and this is effectively reinforced by storm clouds gathering behind the majestic mountains.

As the German armies march into country after country, their Austrian allies are expected to rejoice in their conquests.  All Franz can see in these newsreels is the suffering of the conquered people.  As a result he refuses to contribute to S.S. collections, say “Heil Hitler”, or accept the family allowance.  When hostile villagers tell him he owes a duty to the Fatherland, he replies that we are responsible for what we do.

The contrast between war and peace, hate and love, Mother Nature and Human Nature is powerfully conveyed when the priest tells him that the bells of the church are being melted down to make bullets.

As a result of his stance Franz and his family are shunned by most of the villagers. The theme of suffering now comes to the fore. 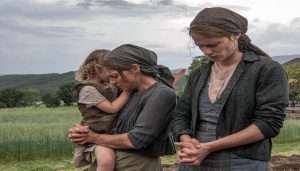 It begins with the ostracisation of his wife and children.  They are tormented by children throwing stones, people ignoring them in the street and haymakers turning on them with scythes.  When Franz is called up and refuses to take the oath, Fane and her sister can find nobody who will help them run the farm.  Other women, demand to know why their husbands who are fighting should do so on behalf of Fritz’s family.

This family also includes his widowed mother whose only child Franz is.  Her pain mirrors that of her daughter-in-law when they know their son and husband is going to die.  In a very moving scene, Fane breaks down and drags her hands through the mud saying, “You cannot change the world; I need you”. In her mind his mother speaks to him too –“My dear son, you are all I have.  You know what it’s like to lose a father and I know what it’s like to be alone.”

The experience and heartbreak his family experience is an argument used to try and make him change his mind, and is a moral factor in the other moral issue of whether or not a man has the right to put himself to death for the truth. 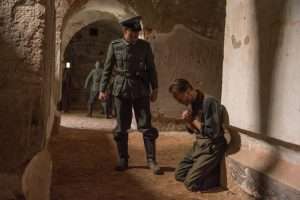 This film poses other similar issues such as: Is it better to suffer injustice than do it?; is it right to put truth above your needs and the bodily instinct to survive?; is it wrong to think that a caring God would condemn a man for signing a piece of paper when he knows what is in his heart?; did God desert Jesus, in the way he seems to have deserted Franz?; is he the peoples’ enemy because they disagree with him or because he highlights their cowardice?  Could we do what Franz did?  Would we have stood up for Christ?

There is a huge challenge to us Christians because it forces us to address the suffering of Christ.  If Hitler is the Antichrist, then Franz is the Christ figure.  By the time he is dragged to the execution shed, what he has endured is etched all over Franz’s face.  At this point I wanted this very long film to end just to see his torment finish.

And yet, at the end there is a moment of pure redemption when Franz comforts a terrified young boy, who is pushed down beside him as they wait in a row to be slaughtered.

This is not a comfortable film, but if you can hold out until the last moment it is well worth the wait.

A Must See (with a health warning re some scenes)