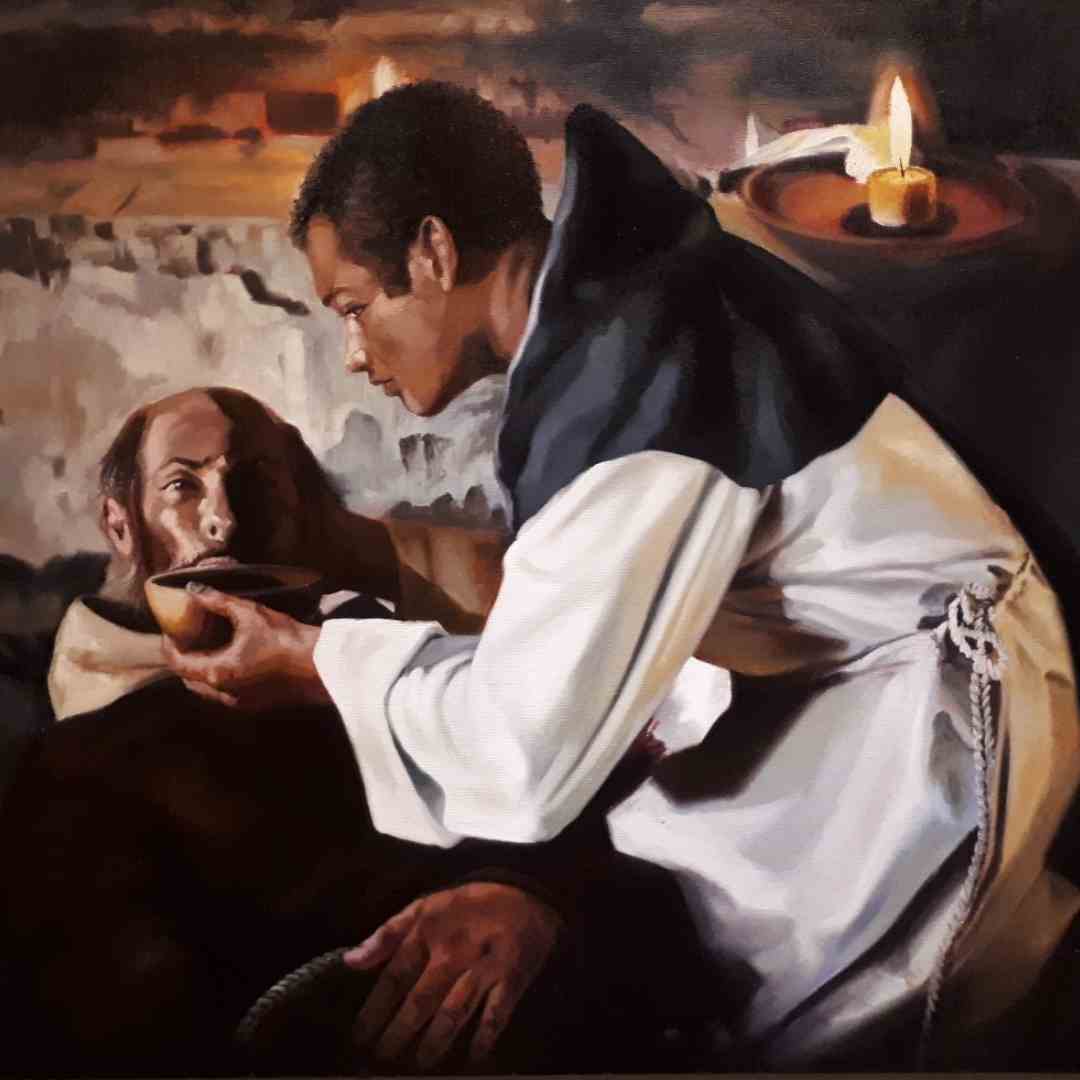 St. Martin de Porres was born in Lima, Peru, on December 9, 1579 to Don Juan de Porres, a Spanish nobleman and adventurer, and Ana Velasquez, a freed daughter of slaves from Panama. His father abandoned the family when Martin and his sister, Juana, were very young. Ana Velasquez supported her children by taking in laundry.

Martin’s childhood poverty did not embitter him but made him sensitive to the plight of the poor, and especially the orphans to whom he would devote much of his time and resources. Even as a child, Martin would give the family’s scarce resources to the beggars whom he saw as less fortunate than himself.

When Martin turned eight, his father had a change of heart and decided to claim his two children (publicly identified as mulatto, a term used for mixed-race children) in spite of the gossip to which it subjected him. He made sure that both were afforded a good education and had enough money for the family not to suffer hardship. At the age of twelve, Martin began an apprenticeship with a barber/surgeon named Marcel de Rivero. He proved extremely skilful at this trade and soon customers, who at first were sceptical of the young coloured boy, came to prefer and ask for him.

After leaving home, Martin took a room in the house of Ventura de Luna. Always a devoted Catholic who spent much time in church, Martin begged his landlady for some candle stubs. She was curious about his activities and one night spied on him through a keyhole and witnessed Martin in a vigil of ecstatic prayer — a practice he would continue throughout his life.

Martin often challenged his brothers on their racial attitudes. In one story, Martin came upon a group of Indians sweeping the floor under the watchful eye of one of the Dominican brothers. When told that they were cleaning to repay a meal they had received, Martin pointed out that the brother had fed some white people the previous day without forcing them to clean. After Martin’s firm but gentle challenge, the brother took up the broom himself.

Martin frequently insisted on performing such hard and menial tasks as caring for the Order’s horses in the evenings, even when informed that servants were available for these chores. He would argue that the servants were tired from their day’s work while he, Martin, had done very little. He also extended his healing gifts — going to the servants’ quarters and treating their ailments. 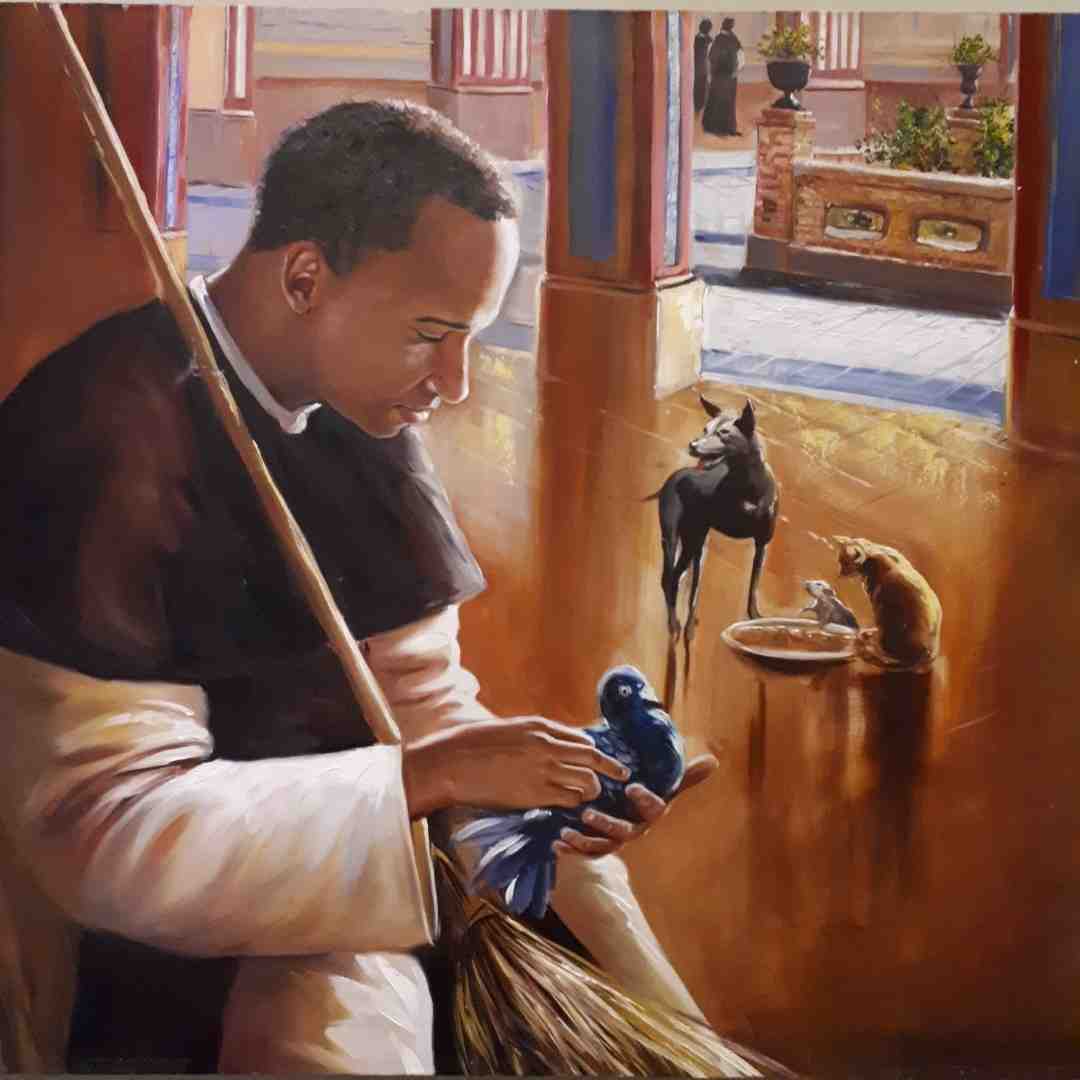 Martin’s spiritual practices were legendary. He would often fast for extensive periods of time on bread and water. He loved all-night vigils, frequently praying by lying down as if crucified, sometimes kneeling but, miraculously, a foot or more off the floor. Equally legendary was his love of animals. He would feed and heal all animals that came into his vicinity and they understood and obeyed him. St. Martin is often portrayed with mice because, according to one story, the monastery was tired of their rodent problems and decided to set traps. Martin was so distressed that he spoke to the mice and cut a deal with them that if they would leave the monastery, he would feed them at the back door of the kitchen. From that day forward, no mouse was seen in the monastery.

However, it is St. Martin’s charity that made him the patron saint of social justice. Martin fed, sheltered and doctored hundreds of families. He also provided the requisite dowry of 4,000 pesos to enable at least 27 poor young women to marry. Last, but not least, he established the Orphanage and School of the Holy Cross, which took in boys and girls of all classes and taught them trades or homemaking skills. Over much criticism, he insisted that the school staff be well-paid so that they would give their best service. St. Martin died on November 3rd, 1639. He died surrounded by his brothers and reciting the Credo, his life ending with the words “et homo factus est”.

His funeral was attended by thousands of Peruvians from all walks of life who vied to get a piece of St. Martin’s habit as a relic. These pieces of the saint’s habit have been associated with innumerable miraculous cures.

Patron of: the sick and afflicted