On January 6th we celebrate both Little Women and Wise Men and by that I mean Nollaig na mBan and the coming of the Magi to Bethlehem.  The latter, of course, is a well-known event in the Christian story of Christmas, but the former is a particular Irish tradition.  I must confess that it did not really register with me until one friend told me she and her female work colleagues had gone out for a meal and another friend texted me a ‘Happy Nollaig na mBan’.  So what is it all about? 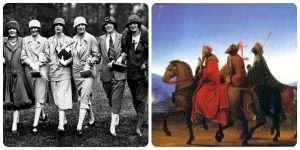 Custom with a Gaelic title, Nollaig na mBan, was celebrated on the 6th of January, the last of the twelve days of Christmas, particularly in the west of Ireland.  On this day men traditionally took on the household duties and the women were in effect given the ‘day off’.  It was a break from a long period of hard work; work made even more difficult because there were none of the kitchen amenities we take for granted today.

You could say that the women were also ‘let out ‘for the day because in 1932 a marriage ban had been introduced which prevented any married woman from working in the public sector.  This was not abolished until 1973.  Back in the days when large families were a feature of life, much more so than now, Christmas was a particularly busy time for women.  Men worked outside on the land but did no housework and were not involved with childcare. 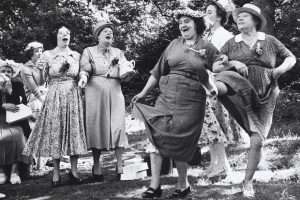 The day was also known as Little Christmas because it was a lesser version of Christmas Day.  Women would visit the houses of their neighbours and friends for a cup of tea, a chat and what was left of the Christmas cake. Because it was the last day of the Season the fare was what was leftover from the 25th onwards.

The Irish folklorist Kevin Danaher in his book The Year in Ireland suggests that while “Christmas Day was marked by beef, whiskey, men’s fare” –  on Women’s’ Christmas “the dainties preferred by women – cake, tea, wine were more in evidence.”

In the earlier years visiting was mostly undertaken in the afternoon as women did not stay out late and in those days did not drink.  However, as time passed women would meet up in public houses.  There they would gather in the snug which was a small private room inside the front door.  It was an unwritten law that women were not seen in pubs, an idea which still prevailed even into the nineteen-sixties.

Although we live at a time when so many women work outside the home and are economically independent, there are those like my friend who still observe the day.  Parties of women and girls are common in bars and restaurants on this night. Some restaurants cash in on Women’s Christmas by promoting special lunches for groups of women.

It can be good for business at a slack time of the year when the splurge on Christmas outings is finished.  There are even promotions for overnight packages in hotels which many groups of women avail of.

Events also take place across the country to mark the day. One of the most interesting is the special walking tour run by Glasnevin Cemetery Museum to focus on female figures in Irish history such as Maud Gonne.  In many places, the day has been marked by raising money for charity events.

Not Forgetting the Men

January 6th is also the feast of the Epiphany.  The Gospel of Matthew mentions the wise men who came from the east to worship the new-born baby Jesus. These Magi were probably Persian priest-astrologers who could interpret the stars, particularly the significance of the star that proclaimed the birth of the Messiah.

Even though some mystery remains as to their identity, the importance of their role in the conveyance of witnesses to the miracle at Bethlehem should not be under-estimated.  Their tall and noble bearing grace many a horizon on popular Christmas cards, often drawing our eyes to the Star and reminding us, through their long passage from the East that the Good News would spread to all corners of the Earth.

The visitors from the East brought with them gifts of gold, frankincense, and myrrh.  There are two traditions around what was meant by this  The first, referred to in the carol ‘We Three Kings’ interprets them as symbolising three aspects of Christ’s future life: gold representing kingship; frankincense representing worship; myrrh representing death and mourning.

An alternative tradition holds that Mary and Joseph used the gold to pay for the stable, the frankincense to perfume it and the ointment for the new-born baby.

The Magi serve as an example of faith and perseverance to us all, because of their belief in him when they had not seen him and their willingness to undertake a long and treacherous journey to pay him homage.