Pope St John Paul II was born one hundred years ago last Monday.  When future historians look back on the most influential personalities of the 20th century, his name will undoubtedly loom large in their accounts.  Even his critics would agree that few individuals have had a greater impact-not just in the field of religion-but also socially and morally, on the modern world.

Yet when I think of him, one incident stands out, not often mentioned, but indicative of his compassion and his imaginative ability to empathise; perhaps not surprising given his background as an actor. In most of the accounts of his life that I have read, the incident I have in mind it is not referenced  Granted, there is an abundance in his life to reflect on, but I suspect the reason lies more in the fact that it relates to a dream of his, and dreams are capable of many interpretations and not empirically sound! 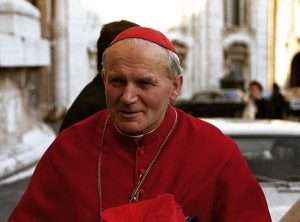 John Paul was haunted by a dream he had in 1969, while a Cardinal, on the eve of his first visit to New York City.  It was late summer and he had just finished a tour of Canada.  He recounted it as part of his contribution to a book being written about his life.  The subject matter ranged from reminiscences of the time when he was living under the terrors of the Nazi occupation of Poland to his own reflections on social justice issues, theology, and church doctrine.  In the middle of one session he changed the subject to this dream he had had during the night, prior to his departure for the USA.

He was walking along snow-covered streets and although he had never been there, it seemed to be Manhattan, gripped by the cruel cold of winter. Suddenly a small brown and white cat appeared, followed by six brown and white kittens in a straight line.  Every now and then she looked back to check that her little ones were okay. She moved towards the open door and lights of a luxurious apartment block and was summarily dispatched by a doorman wielding a broom. Cardinal Woytyla tried to shout out, “Let them in”, but no words would come Was he afraid of the doorman, he wondered?  In the pockets of his cassock he found some bread and tried to say, “Kitty, Kitty” but still he was silent.  The bread crumbled into crumbs and flew away; he hoped the birds would find them.

He followed the cats with a pain in his chest and a feeling of dreadful cold.  Soon the little group came to a Jesuit Catholic church where music could be heard from within.  Now the Cardinal was sure they would get help.  Up the steps the little group climbed, only to be chased away by a tall Jesuit.  They fled around to the back from which floated the mouth-watering aroma of food but here too they were turned away by another priest.  Karol wanted to shout out “I am A Cardinal”, in an attempt to use his authority to get them food and shelter.  Again, no words came. 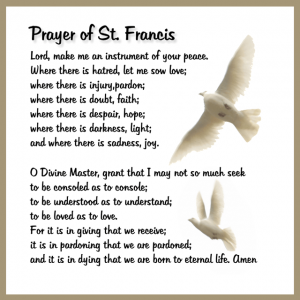 The feline family returned to the avenue and started to walk northwards.  Soon another church appeared, this time of the Anglican domination.  Here a bishop emerged and advised them to go to the animal shelter where they would get help.
On again trekked mother and kittens uptown and gradually the beautiful buildings gave way to drab, dilapidated apartment blocks.  As they walked and the buildings grew shabbier and dirtier, a door opened in one and an old wrinkled woman in a cotton dress appeared.  On seeing the poor little creatures, she exclaimed, “Oh little mother”.  As she spoke Karol noticed that she had very few teeth.  She gently ushered in the mother cat and kittens, and they began to jump about happily as the warmth of the house embraced them.

When the pope concluded the account of his dream, the author to whom he related it said nothing, but later wrote, “I have never seen such a sad expression on the face of this man”.  It seems that the pope did not comment on his dream but he did begin to recite the prayer of the great lover of animals St Francis of Assisi, Lord, make me an instrument of your peace.  This saint, like St Martin famously welcomed animals as fellow creatures of God. 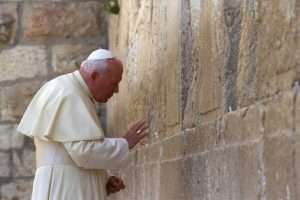 There are a wealth of interpretations which can be taken from this dream.   It has been noted that it is a continuum. Whereas many dreams jump and cut out, here we have a beginning, a middle, and an end.  The conclusion is happy, but is preceded by rejections which bring to mind both the situation of Joseph and Mary in Bethlehem outside the inns and the parable of the Good Samaritan. Could it be that the cat family are representative of the Jews in Poland under German tyranny?  Before he was twenty Wojtyla had witnessed the horrors of the Nazi occupation of his homeland and the genocide of the Jews.  It is certain he would have seen them being killed in the streets.  Auschwitz was just seventeen miles from his town.

He was there when the Nazis closed the university, rounded up his professors, and had them deported or shot.  For John Paul, the Holocaust brought profound personal losses, the deaths of people he knew and cared for. There was a lot of anti-Semitism in Poland which Karol had no part in but there may be a suggestion in the dream that religion, collectively, did little if anything to help.  It is significant that he is unable to speak and that he mentions the word fear. In 2000, he visited Israel, and apologized publicly for the persecution of Jews by Christians, including the Holocaust, and depositing a note pleading for forgiveness in a crack in the Western Wall. 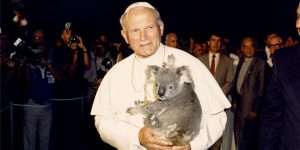 The cats could also symbolize the poor who are turned away by the rich and taken in by someone who has very little herself, but is willing to share.
An obvious point is that this is a dream about animals and it is interesting the Pope John Paul would go on to say that animals have a soul and are as near to God as we are.  He based this belief on the fact that they too were formed from the breath of God.

Personally I am intrigued by the idea of an Anglican showing some sympathy and a powerless woman coming to the rescue!  However we can all have subjective agendas and this is not my dream.  It belongs to Karol Wojtyla, and indeed it would seem that it had a profound effect on the man who went on to be Pope.