One day last week I noticed that the doors of my parish church were open so I decided to go in and see what was happening. I discovered that a small section of the church was in use for people to make a visit, just to light a candle and say a prayer. There was a table with hand sanitizers and as I sat down I thought how nice it was to be able to experience such a moment of peace again. Like many others, I had not been inside a church since the middle of March.
There is no doubt that people miss not being able to get to church. This fact was reflected in the words of Archbishop Eamon Martin who earlier this month joined with leaders of other Christian traditions to welcome the re-opening of churches in the North. In an online statement they said, “In particular, we are keen to respond to the appeals from those who find great comfort in visiting their church for private prayer, from couples who are anxious that they can proceed with their marriage ceremony and from parents who wish to have their children baptised.”
Also of course there is a great sense of loss as a result of being denied the normal traditions around the burial of the dead. Live-streamed masses have become the norm and daily email newsletters have replaced weekly paper bulletins. 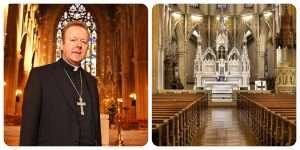 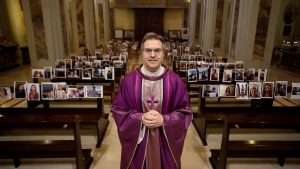 Many priests have come up with imaginative ways to communicate more meaningfully with their parishioners. For example the Italian paper, la Repubblica published an article with the headline ‘The Digital Church”. The word digital referring to the modern use of social media carried out by a priest, Fr. Corbari from a small town in Lombardy, Robbiano di Giussane.

When his church could no longer host ecclesiastical events he came up with a unique idea. Finding it quite lonely to arrange masses by streaming in a completely empty church he asked his parishioners to send him a photograph of themselves – a selfie or photo where they were with their family members.
The idea was well received and in the days that followed, Fr. Corbari received an incredible amount of images from his congregation. They were all placed in long rows along the benches. Now when he delivers his sermon he feels he really does have listeners!

Also the clergy in the church of San Gabriele dell Addolorate, in Rome’s Tuscany district have chosen unconventional ways to stay in touch with their flock. An altar has been placed on the roof of the church and occasionally they broadcast services in streaming, under the open sky.
In a seaside village not far from Venice Fr Andrea Vena erected the statue of the Madonna on a three-wheeled car and set off to minister to the people of Bibione. Standing next to the statue he recited prayers through a loudspeaker stepping back every now and then to sprinkle holy water on passers-by and distribute images of saints known as ‘santini’. Fr Vena is one of the many Italians who accepted Pope Francis’ invitation to go out and reach out to people in need, even at a time when the general imperative is to stay at home. 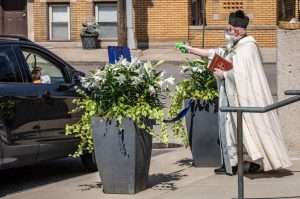 A Shower of Blessings

A Catholic priest in Detroit sprayed holy water from a spray gun as he blessed people and their Easter Baskets on 11 April. Photos posted on Social Media by the St Ambrose church shows Fr Tim Pelc shooting water into a car window as it stopped by the steps of the church. He wore a mask, face shield, and rubber gloves.
Fr Pelc told CBS News that he wanted to do something cool for the children for Easter. Underneath the original post, people as far as Austria commented on the images. The idea also became a hit on Twitter.

A Mexican priest went even further when he not only used a water gun to bless children with holy water, but also wore a robe covered in cartoon favourites.
Just this week the image of Fr Steve Klasek seeming to baptize a baby using a water gun that went viral. Spreading like wildfire over social media it was praised by some but not by others. However, on Tuesday, the priest revealed that the proceeding was staged and meant to be funny. He did it to oblige the family in imitation of the other posts of priests circulating around the Internet. The water used was not holy and the pistol as aimed not at the baby but her Dad. 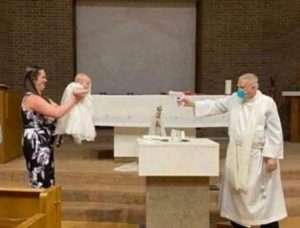 This has helped to fuel the ire of those who are alarmed that such actions, in jest or not, are demeaning the sacredness of blessings and the Sacraments. They do not agree with others who consider the responses of such clergy as creative ones in a time of crisis. In fact, the priest in Mexico has been accused of Liturgical Abuse. The former group worries that such ‘innovations’ leave the Church vulnerable to ridicule, especially by non-believers. There is a concern too that it could undermine the faith of Catholics by seeming to trivialise the most symbolic actions.

Perhaps we have to accept that ‘desperate times call for desperate measures’, although I doubt this is a position which the purists and the Canon Lawyers would uphold. An interesting debate which could hardly have been contemplated before Covid-19 forced us all to contemplate our world from a whole different angle!