All of us in Ireland and the rest of the world have been affected by the crisis of Covid-19, none more so than the people working on the front line. One such group is, of course, the nurses, those dedicated women, and men, many of whom have lost their lives, in the fight against this killer virus.

Nurses are one of the most trusted healthcare professionals with a significant role to play in the treatment and medical care of the sick.  The profession has also branched out into various specializations with further education in particular fields of nursing care, such as pediatrics.

Nurses work in a variety of settings and specialist areas and they may choose to practice in hospitals, nursing homes, medical offices, ambulatory care, and occupational health, or in schools, clinics, camps, and shelters.

The Nursing Profession has long been a well-respected career and it is indeed fitting that every year, on May 12, International Nurses Day is celebrated around the world.  This event acknowledges the debt we owe to nurses and encourages our fully deserved congratulations to a group almost all of us, at some point in our lives, will come to depend upon.  The date has a very strong significance marking as it does the birth of the world’s most famous nurse, Florence Nightingale.  Florence is credited with founding modern nursing and was born two hundred years ago this week. 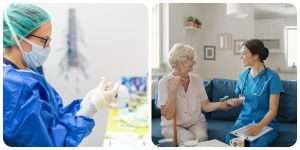 Florence was brought up in a society where young ladies of good family were expected to look pretty and engage in gentle conversation, but not to hold strong views on any subject. However, Florence, whose parents were very wealthy, held strong views on most things.  In particular, she was aware of the extreme poverty that existed in Victorian England, and as a response to this, she began nursing the poor who lived in hovels not far from her own beautiful home.

Neither parent supported her desire to become a nurse.  They wanted her to do what was expected and marry a rich man – not take up a job that was regarded as lowly and menial labour by the upper social classes.  In a bid to make her forget this ‘nursing business’ some friends of the family took her on holiday to Egypt.   However, towards the end of her holiday, she became very ill and it was arranged for her to go into a hospital in Germany. 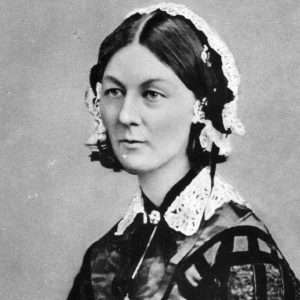 Angel of the Crimea

Much impressed by the conditions here and despite her parents’ objections, Florence went on to enroll as a nursing student in that same Lutheran hospital of Pastor Fliedner in Kaiserwerth.  Eventually, Florence was accepted as matron to a private hospital in Harley Street, London.  Her name became well known in medical circles, so it was no surprise when the Secretary for State for War, Sidney Herbert commissioned her to take forty nurses to aid the British soldiers fighting the Russians in the Crimean War.

They were sent to Scutari on the Black Sea, where the British Army was using a Turkish artillery barracks as a hospital.  Florence and her team worked hard, often for long hours without rest, tending the poor wounded men.  After the war, veterans told how she passed through the wards carrying a lamp.  To see “The Lady of the Lamp” go by was enough to comfort many a man wracked with terrible pain and the barrack hospital at Scutari soon became a place of hope, where men blessed the name of Florence Nightingale.

Although primarily remembered for her accomplishments during the Crimean War Florence’s greatest achievement centers on attempts to create social reform in health care and nursing.  In 1860 she funded the establishment of St Thomas’ Hospital, and within it, the Nightingale Training School for Nursing.  Thanks to her, nursing was no longer frowned upon by the upper classes; it had, in fact, come to be viewed as an honourable vocation.

It is a source of pride to be a nurse but it is also humbling to be able to care for and look after someone else.  Becoming a nurse provides an exciting opportunity to make a difference in other people’s lives.

Sometimes, of course, no matter how much they do a patient will die.  While this is a source of sadness the nurse may be the one to hold their hand and be with them in their final moments.  Many people are unable to with their loved ones when they die.  This, of course, is sadly the norm now in this COVID Age. The nurse is more and more the last source of human contact and compassion.

According to the International Council Nurses, there is a vital and pressing need for more mental health support for frontier nurses as a result of the coronavirus pandemic. 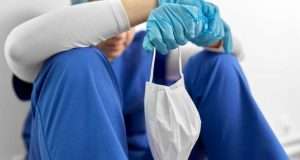 In some places, nurses are being physically as well as verbally targeted due to ignorance on the part of the public with regard to the enormous severity of this virus.  This combined with anxiety and overwork increases the risk of post-traumatic and other stress-related disorders.  Nurses have even been shunned just because they are working with COVID 19 patients.  Worse, some have been heckled, spat upon, and labelled “disease spreaders” by people in the street.

All this is made more difficult by issues such as the death of colleagues and patients and frustration with employment situations.  Nurses are increasingly at risk of anxiety, depression, chronic illness, and burnout.  Some wonder if it is only the pandemic that has forced the public to see how valuable the nursing profession is.  Others are angry at the very people who did not back them when they went on strike but who now sing their praises.  There is also disappointment at how the government has pulled back on helping frontline staff with childcare costs.

At the best of times, Nurses are a precious resource; it is a sorry reflection on us all that it seems to have taken Covid-19 with all its attendant horrors to finally make us all appreciate this fact.