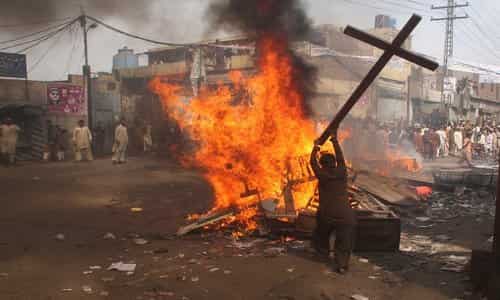 I was at a Mass recently where the Priest talked about how Christians are the most persecuted religion in the world today. I had heard about this before; back in 2012 the German Chancellor Angela Merkel said the same thing to a gathering of the Lutheran Church. It was only while listening to the priest talking that I began to wonder about what this might really mean.  We are all aware of how Christians were persecuted under the Roman Emperors; the images of them being thrown to the lions is particularly iconic. Still that seems a very long time ago.

Today to a great extent we take our religious freedom for granted in the West, even if many in these secular, sceptical times regard it as being irrelevant and out-dated. Those of us who do practice our religion, do not imagine that those who do not, would ever attempt, or even want to prevent us from testifying to our faith in Jesus Christ by going to church. However, there are places in the world where the reality is very different.  There are many small, though long-established Christian communities in Egypt, Syria, Iraq, Pakistan and beyond who do have the same freedoms that we enjoy.

Earlier this year, Jeremy Hunt, the then British Foreign Secretary commissioned a report on the persecution of Christians. Hunt, an Anglican, had made the issue of Christian persecution one of the major themes of his portfolio. The report showed that a century ago Christians comprised 20% of the population in the Middle East; now it’s 5%.

Millions of Christians in the region have been uprooted from their homes, and many have been killed, kidnapped, imprisoned and discriminated against, the report found.  Even while the report was being finalised, it became out of date, owing to the “horrific death toll” of the attacks on Christians at Easter in Sri Lanka.  As the journalist – and author of The Global War on Christians – John L. Allen has noted, attacks on churches and church gatherings on feast days have been a hallmark of Islamic extremist groups in recent years, and Easter has been a favourite time to carry out atrocities.

The report identifies three drivers of persecution: political failure creating fertile ground for religious extremism; a turn to religious conservatism in countries such as Algeria and Turkey; and institutional weaknesses around justice, the rule of law and policing, leaving the system open to exploitation by extremists. The rise of hate speech against Christians in state media and by religious leaders, especially in countries like Iran and Saudi Arabia, has compromised the safety of Christians and created social intolerance.

It also says… “In some regions, the level and nature of persecution is arguably coming close to meeting the international definition of genocide, according to that adopted by the UN.”

When something as serious as this is happening on such a grand scale we have to ask why?  A closer look at some countries where it is most difficult to be a Christian provides us with some of the answers.

In many nations Religious Nationalism is a key factor, including the atheistic, cultish regimes in North Korea, Eritrea and Myanmar.  The communist regimes in Uzbekistan Laos and Vietnam also actively oppose the churches and Christians in their midst.  In China, the world’s largest Communist state, the suppression of underground churches is getting worse.

Persecution in our times is mostly at the hands of militant Muslims, but it also comes from atheists, Hindus and Buddhists.  In many countries where anti – Christian hatred is felt most keenly, followers of Christ are despised for their alleged disloyalty or ‘foreignness’, even in places where Christianity has been present since Apostolic times or shortly thereafter.  Turkish Christian citizens have often been stereotyped as not real Turks but as western collaborators.  It is ironic that many Western secularists, Islamic extremists, and authoritarian regimes share a common erroneous assumption – that the Christian faith is primarily an expression of white Western privilege.  In fact, Christianity is primarily found among the global poor.

In Saudi Arabia there are strict limitations on all forms of expression of Christianity including public acts of worship.  There have been regular crackdowns on private Christian services.  School textbooks teach pupils religious hatred and intolerance towards non-Muslims, including Christians and Jews.

The eradication of Christians and other minorities was revealed to be the specific and stated objective of extremist groups in Syria, Iraq, Egypt, north-east Nigeria and the Philippines.  An intent to erase all evidence of the Christian presence was made obvious by the removal of crosses, the destruction of church buildings and other church symbols.

Over the last two years in China, crosses have been removed from 1,500 church buildings, and Catholic churches and shrines have been desecrated or destroyed in the provinces of Hebei, Henan, Guizhou, Shaanxi, and Shandong.  In Guangzhou, the Communist Party officials offered a reward of around $1, 5000 to anyone who provided information about underground churches, secret Christians, and unsanctioned religious activity.  Some pastors and church members are being jailed.

In Pakistan there is official tolerance but the country’s strict blasphemy laws leave the Christian minority prey to constant attack.

In India Christians are the victims of mobs and pogroms.  In April this year a mob of Hindus beat to death a Catholic man suspected of slaughtering a cow in India’s Jharkhand state.

It is regrettable that in the West there is not as much focus on all this suffering as there are on other international issues.  In response to the report’s findings, Jeremy Hunt had the following to say: “We have all been asleep on the watch when it comes to the persecution of Christians.  Personally, I think it is partly because of political correctness that we have avoided confronting the issue… there is a misplaced worry that it is somehow colonialist to talk about a religion that was associated with colonial powers rather than the countries that we marched into as colonisers.”

This is echoed in the famous words of Alastair Campbell, the Prime Minister’s Director of Strategy and Communications, who interrupted an interview with Tony Blair, when he had been asked about his Christian faith, with the words “We don’t do God”.

Is it that we in the West just do not care, or are not as aware as we should be?  Certainly there is a perception that countries, like Ireland might be slow to voice any concern for Christian persecution in places where trade could be affected.

Whatever the reasons the Western policy of silence will only allow the situation to get worse.  The ultimate irony lies in the fact that in the same lands where Christianity first blossomed, many are now warning that it faces extinction.

In the words of Pope Francis, “The world hates Christianity for the same reason it hated Christ, because he brought the light of God, and the world prefers shadows in order to hide its wicked works.”