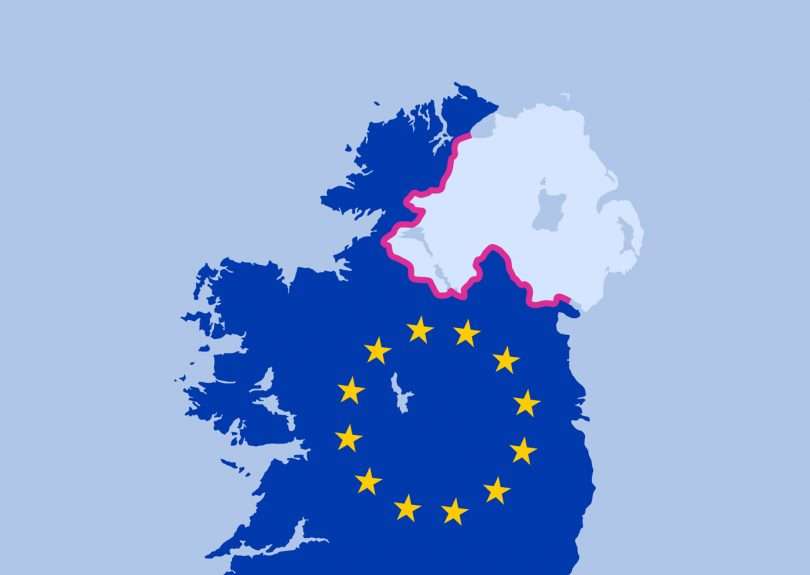 As a country Ireland’s nearest neighbour is of course England, that other island just across the water.  Sadly love has seldom come into the relationship between the two countries, although in recent times, and especially since the Good Friday Agreement, relations have improved greatly.  Now however, to quote a speaker I heard on the radio ‘the bawling baby of Brexit’ has plunged us into crisis again.

This week Boris Johnson was elected as the new leader of the Conservative Party and also became Prime Minister.  Now we can only wait and see, with some trepidation, given Johnson’s somewhat controversial record, how events will unfold in the build-up to the last stage of the UK’s departure from the European Union on 31 October.

Exactly a century after the Normans had conquered England at the Battle of Hastings, the King of Leinster, Diarmait Macmurchada, was ousted by Ireland’s high King – Ruaidri Ua Conchobair.  To help take back his Kingdom, Macmurchada invited the Normans to Ireland in 1169, a move which backfired when the Normans took his domain for themselves.

The Norman invasion was a watershed in the history of Ireland, marking the beginning of more than 700 years of direct English, and later British involvement in Ireland.

The death-toll from the famine is unique in modern European history.  Over a period of seven years the government in England spent about £9.5 million on famine relief schemes.  This contrasts with the € 69 million spent on military expenditure during the three years of the Crimean war ten years after the famine.  The London Times wrote that the ‘innate indolence ‘of the Irish people was the cause of the famine and of their distress.  The real cause were the laws and conditions which deprived the masses of the rights of property and the fruits of their labour.

There is a historical irony in the fact that Northern Ireland – a legacy of both King James VI’s colonisation in the early seventeenth century, and of Ireland’s exit from the UK in the early twentieth century is now the main obstacle to approval by the House of Commons of the withdrawal agreement between the UK and the EU.

The 499-kilometre will become the only land border between the UK and the European Union after Brexit.  The 1998 Belfast Agreement brought peace to Northern Ireland and removed the need for border checks.  However Brexit means that different customs rules, regulations and standards will apply in Northern Ireland and the Republic if the UK is leaving the EU so the different rules would have to enforced at a border. The general fear is that the return of customs officials or border inspectors would be so unacceptable to people who travel freely across an open border, that it would lead to anger and potentially violence. Neither party to the Brexit negotiations wants to see the return of a hard border, but they cannot agree a plan on how to achieve this.

Getting to Know You

It is probably fairly safe to that many of the die-hard Ulster unionists are more British than the British themselves. This in itself is ironic given the fact that a lot of people in England know very little about Irish history.  I can vouch for this personally having taught history for five years in a school in Devon.  On one memorable occasion one of the girls asked me if the Queen ruled Ireland as well!  I tried to explain but had little or no evidence from the Text Books to back me up because the subject was not covered.

Therefore I do not think it is surprising that a lot of people across the water have simply no interest in Northern Ireland or why their British identity is so important to the Northern unionists.  It is also a well-known fact that the Northern Ireland job is considered by many British cabinet aspirants as one to be avoided.

Living in England for five years did help me to get to know my neighbours and I visit my friends there every year.  Personally I love the country which is very beautiful and whose people were welcoming and hospitable. I do worry about the negative effects a no-deal exit could have.  One of the key issues with a no deal scenario is the uncertainty it would lead to for life and work in Britain. Many Irish people like myself have worked in England and many of us have family members who moved there and whose children are English-born.

Unfortunately the prospect of a no-deal exit remains a real possibility with Boris Johnson as the new Prime Minister.

The Brexit project was driven in large part by English nationalists who hark back to the ‘good old days’ of the British Empire, built on false or faulty foundations with regard to what the European Union is, and on idealised notions of the historical positive effects of that same empire on countries like Ireland.

For decades the UK had had a somewhat difficult relationship with its neighbours in Europe.  London kept its distance from EU authority by negotiating opt-outs from some of its central policies, including the common euro currency.  The UK did not join the EEC until 1973.  The British people approved membership in a referendum but suspicion of political union with the rest of Europe remained strong.

The leading argument at the forefront of the Leaving Campaign was Immigration.  The number of EU migrants in the UK nearly tripled between 2004 and 2015, from about one million to over three million, almost totally due to an influx of citizens from newer members including Poland, Bulgaria and Romania.  Terrorist attacks in Paris and Brussels raised fears that the free movement of people leaves the UK vulnerable.

There is something very sad about all of this anti-rhetoric, however real the fears and as Christians it is hoped that we realise that there are human stories behind all the statistics.

The countdown to October 31 has begun…  In a reversion of the historic relationship between the two neighbours, it is Ireland, thanks to its position within a united EU that has the greater power.  There is however no power like that of Prayer, so let’s offer up some that the greater good will prevail.