Christianity, The Lion King and Narnia

This week I finally got to see the new version of The Lion King.  I wanted to go once I heard it had been re-made as I loved the original film released in 1994.  I personally preferred the earlier one but the essential themes are all there, the main one being the battle between good and evil.

This, of course is something that lies at the heart of Christianity, the evil of sin which separates us from God and the battle between Jesus and Satan. Quite a few of the scenes in The Lion King resonated, for me anyway, with the Christian story.

The film is set in the African savanna and opens with all the animals making their way to see the presentation of the newborn lion cub, Simba who will one day be their ruler.  The present king, Simba’s father is Mufasa a wise and just ruler whom the little cub adores and idolizes.

However Mufasa’s brother Scar is the opposite, bad and cunning; he hates Simba because before his birth Scar was the heir apparent.   Scar has his own plans and so the battle for Pride Rock begins.  It is a story of betrayal, tragedy and drama ultimately resulting in Simba’s exile.  With help from a comical pair of newfound friends, the little lion will have to grow up and figure out how to take back what is rightfully his own. 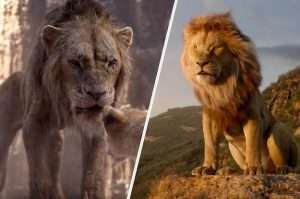 Simba leaves his homelands because evil Scar has managed to persuade him that he was responsible for the death of Musafa.  In fact it is Scar himself who has deliberately caused the death of his own brother.

In a very moving scene Simba’s reflection in the water changes into that of his beloved father and from the sky comes Musafa’s voice.  He tells Simba that he should remember who he is: he is the son of Mufasah and the one true King.  This is very reminiscent of Matthew 3:16 which describes the baptism of Jesus in the Jordan.  “As soon as Jesus was baptised he came up from the water, and suddenly the heavens opened and he saw the Spirit of God descending like a dove and coming down on him.  And a voice spoke from heaven, ‘This is my Son, the Beloved. In whom I am well pleased.’

The Kingdom of the King

Jesus too is destined to be King, not the King the Jews mock with the crown of thorns, and not a King who will overthrow the Romans. Instead He will bring about the reign of God, which is when God’s ways permeate our ways, leading to the fullness of life, peace in the world and peace forever in the Kingdom of God.

When Simba eventually returns from exile, he like Christ comes as a Saviour to free the land from the destruction visited on it by Scar and his terrible band of hyenas. Peace is restored and hope returns, as the rightful King leads those in his charge out of the darkness and into the light.

Isaiah 11 describes the coming era when Jesus reigns on earth.  It is interesting that the animal kingdom is used as an example of the restoration of peace and harmony.  Verse 6 paints a vivid picture of this time: “The wolf lives with the lamb, the panther lies down with the kid, calf and lion cub feed together with a little boy to lead them.”  The image of lions lying peacefully beside baby calves describes a world restored to its original state.  Isaiah 65:25 continues this idea: “The wolf and the young lamb will feed together, the lion eat straw like the ox, but dust will be the serpent’s food.”

In the film the serpent is of course symbolised by Scar.  When Simba defeats this tyrant he takes his place in the Circle of Life as the rightful King.  The Circle of Life is the equivalent of the Kingdom of God.

The Lion of Judah and Narnia

In Revelation 5:5 we read “Behold, the lion of the tribe of Judah has conquered.”   Jesus is the lion of Judah which means He is the ultimate, true and eternal King.  The roaring lion speaks of strength, majesty and royalty.

While the links between Christianity and The Lion King may be viewed by some as tenuous there is no doubt that in The Chronicles of Narnia by C. S. Lewis, the great Lion, Aslan represents Jesus, as the author intended.  In one of his last letters, Lewis wrote, “Since Narnia is a world of Talking Beasts, I thought He (Christ) would become a Talking Beast there, as He became a man here.  I pictured Him becoming a lion there because (a) the lion is supposed to be the king of beasts; (b) Christ is called “The Lion of Judah” in the Bible; (c) I’d been having strange dreams about lions when I began writing the work.”# 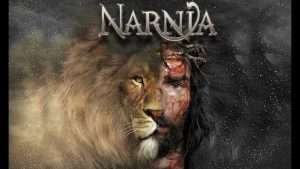 There have been three films adapted from the books, in all of which, Aslan is voiced very effectively by Liam Neeson.

In The Last Battle, Aslan creates a new earth in which all of the main characters, who followed him, come to live after the old world is destroyed.  Again, in Christian theology, this is what will happen at the end of the world: Christ will make a new Heaven and a new earth and reign supremely.