Life as a Dominican Student Priest

For over 800 years the Order of Preachers, the Dominicans have been following in the footsteps of their founder Dominic Guzman, under the special care and patronage of the Blessed Virgin Mary.  In 1216 he established the Friars Preachers with approval from Pope Honorius III and later Pope Innocent III.  Dedicated to preaching Christ and the faith he loved, he founded his Order for that purpose.

This, of course, does not mean that every member climbs into a pulpit or raises their voice in the proclamation.  The artist, the musician, the writer, the teacher, and the one who offers humble service to God with a broom in his hand, like our own dear St Martin, is fulfilling the dream of Dominic.

The world may have changed but the message has not. Dominicans are still driven by a love for Christ, for theology in particular and for the truth.  But how many men today are answering the call? 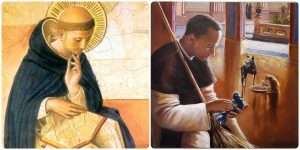 In July 2016 there were eight Dominican priests ordained, most of whom came from a group of thirteen novices who had joined the province seven years before. This was a particularly joyful occasion because it happened in the year that the Order was celebrating eight centuries since their foundation.

Today there are eight student brothers in the Dominican student house of St Saviour’s in Dublin and four new novices in the novitiate in St Mary’s Priory, Cork.  The Provincial Fr Gregory Carroll O.P. observed in an interview with The Irish Catholic in 2016 that while most of his generation joined straight from school, many of the younger generations have already had a faith journey, some may be having gone from the Lord and the Church but returned in various ways.

When they join the order the students are accepting the invitation to become something greater than their own self in brotherhood.  Their lives together are first and foremost lives of prayer.  They pray in each other’s company at least three times during the day; morning, noon and evening. The Morning Prayer of the Church begins with meditation and is followed by the Community Mass. This combination of Eucharist and Divine Office is at the heart of their lives.

Community life is central to the Dominican charism.  It provides invaluable opportunities to learn from one another and in the same interview Fr Carroll spoke about how the student brothers in St Saviours would say of the older men that they love talking to them, and mention in particular the wisdom they draw from them. Dinner and the evening meal are taken together, with community, meditation and evening prayer preceding the latter.

When the day draws to a close there is time for private prayer before the Blessed Sacrament.  The day finishes with night prayer, the Rosary and the singing of the Salve Regina.

The motto of the Dominican Order is VERITAS and the pursuit of truth is central to their very being.  They strive for it in all areas, intellectual, moral and spiritual as well as authentic and truthful ways of living. The students who join are setting out on a journey which will take them on a path to perfect union with God, through eight years of formation. It is a commitment on their part to a radical life of service, sacrifice and fidelity to the Catholic Church.

Part of formation is of course study, which will last all their lives. The students are trained in  Thomistic Theological Formation and most mornings are taken up with theological and philosophical classes.  The discipline involved in the study is in itself a spiritual one and enables personal reflection, reflection on the world and on the deposit of faith which helps to distinguish what comes from God and what doesn’t.

Afternoons and evenings are given over to pastoral work or private studies. Examples of pastoral work include visiting schools and Clinical Pastoral Education which is a requirement for theology graduates who are pursuing certification in professional Health-Care Chaplaincy.

The idea of mission is of being sent; taking the message of God out into the wider world.   The Dominican understanding of truth demands study reflection and prayer but it does not end there.  It spills out into the phrase ‘to contemplate and give to others the fruits of contemplation’.  This involves ways of sharing the Gospel and showing people where God is present in their lives already.

The students these days will, of course, use their modern internet and technological ability to make this message more meaningful to people living in times which are very different, and in a culture which no longer encourages vocations, to the point where there is now a huge crisis in this whole area.

St Martin Apostolate raises funds to help educate and support the students during their years of study.  They are very grateful to their many supporters who have given generously over the years and who make it possible for these young men to promote and preach the good news of Christ.

Donate to the Association of Student Priests