St Therese of Lisieux, the ‘little flower’ is remembered especially in her feast day on October 1st.  One of the Catholic Church’s most popular Saints, Pope Pius X called her “the greatest saint of modern times.”  Thérèse is something of an enigma in that she died when she was only twenty-four, she never left her Convent or founded a Religious Order, yet she became a giant by preaching the little things.  So what is it about her that has such a universal appeal? 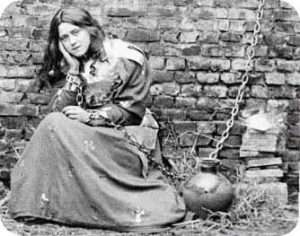 One explanation could be her nearness in time to our own. 1897, the date of her death might seem like a long time ago, the end of the nineteenth century. However, it is much nearer than 1431, the year in which the other great French saint, and a heroine of Thérèse’s childhood, Joan of Arc who died at the stake.

The very fact that we would recoil in horror now at the idea of a young woman being burned alive, shows how far removed we are from the norms of the fifteenth century.  Joan’s singular role as commander of the French army, in a decisive victory over the English, is also something none of us could expect to experience.  Thérèse’s struggles in early life, in the Convent and in illness are more readily identifiable with our own.

Therese was born at Alencon, France on 2nd January 1873.  At first, her childhood was quite idyllic and she was surrounded by the warmth and love of caring parents and four older sisters. Her father and mother, Louis Martin and Zèlie Guérin, were deeply religious and Thérèse herself referred to them as ‘more worthy of heaven than of earth.’

Before Thérèse was five years old her mother died and this first loss was to mirror others in her life.  Her sister Pauline took over the care of the little child and taught her well.  Thérèse was an emotional and highly sensitive child who was easily overwhelmed by her feelings. 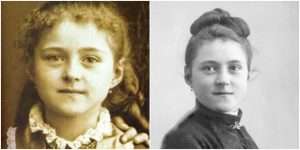 When her father moved the family to Lisieux Thérèse was sent to the Abbey of Notre Dame du Pre where unfortunately she was bullied. This naturally had a negative effect on the young girl but at least her home life continued to be a source of comfort and security.

Then another blow fell; her sister Pauline decided to enter the Carmelite Convent in Lisieux and Therese was reminded once more of the loss of her mother.

When Thérèse was born she had been very frail and there were fears for her life.   She had overcome this but was now suddenly afflicted with fits and became very ill.  The doctors were not able to help her and it was only when the young girl saw Our Lady smile at her from a picture in her room that she became well again.

In May 1887 Thérèse went to her father and told him that she wanted to become a Carmelite nun, and more importantly that it was what God wanted for her. Everyone said she was too young but Thérèse was determined so much so that when she went on a Pilgrimage to Rome, with her father she asked the Pope to give her his permission. Pope Leo XII, was taken very much by surprise, especially as people were not supposed to speak to him!

He blessed Thérèse and said “Well my child, do what the superiors decide…You will enter it if it is God’s will.”

Apparently it was. The Bishop of Bayeux authorized the Prioress to receive Thérèse and on 9th April 1888, she became a Carmelite postulant in the enclosed order in Lisieux. By this time her other sisters Marie and Céline had joined Pauline there. 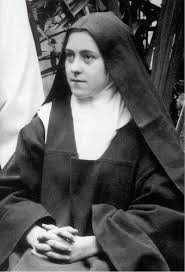 We know from her writings how much Thérèse struggled with life in the convent.  However, she made an effort to be charitable to all, especially those she didn’t like.  She performed little acts of charity always, and little sacrifices not caring how unimportant they seemed.  She would take the worst leftovers of food and on one occasion accused in the wrong of breaking a vase, she fell to her knees and asked for forgiveness.

Conscious that the other nuns might resent the Martin siblings she deliberately avoided her family, seeking instead to spend time with nuns that had often been unkind to her.

She knew she could not do great things; instead, she made of every little action a flower which she offered in love to God.

The fear of God which she found in certain sisters, paralyzed her.  “My nature is such that fear makes me recoil, with LOVE not only do I go forward, but I also fly.”

Therese’s constant companions were the gospels.  Her motto was ‘Love is repaid by Love alone,’ which she borrowed from her great religious mentor, St John of the Cross.

For her, prayer was a surge of the heart and a simple look towards Heaven which enlarged her soul and united it with God. However, Thérèse often fell asleep during prayers and while this caused her great distress she came up with a lovely way of dealing with it: She observed that parents still loved their children while they were asleep and therefore God would love her too.

Therese suffered terribly from scruples (excessive worry about sin), and she also experienced a severe dark night of the soul when she began to wonder if God existed.

On the morning of Good Friday, 1896 she began bleeding from the mouth, due to pulmonary hemoptysis. The tuberculosis which had begun the year before had taken a turn for the worse.

This illness, which would eventually kill her, caused her immense suffering. The doctor who treated her said he had never seen anyone endure as much.

Therese died in 1897, aged twenty-four. A year later, the publication of her autobiography, Story of a Soul, revealed to the world a hidden life of unconditional love of God and neighbour. 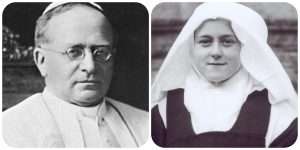 She was canonized by Pope Pius XI in 1925. By the Apostolic Letter, The Science of Divine Love, of October 19th, 19197, Pope John Paul II declared her the thirty-third Doctor of the Church, the youngest person and one of only four women so named.  This is a title given by Rome to saints recognized as having made significant contributions to theology or doctrine through their research, study or writing.

It would seem that people have found in the ‘Little Way’ revealed in her writings more inspiration than in any significant theological works.

Thérèse is famous throughout the world, with the Basilica of Lisieux being the second most popular place of Pilgrimage after Lourdes.

2 thoughts on “St Therese of Lisieux”