One of the most appealing images remembered from religious instruction in childhood was that of the guardian angels protecting us all from danger, both physical and moral.  Just as parents sometimes entrust the younger members of the family to the care of their elder brothers and sisters, so our Father in Heaven commits us to the care of the holy angels.

The concept of an angel assigned to guide and nurture each human being is a development of Catholic doctrine and piety based on Scripture.  Jesus’ words in Matthew 18:10, best support the belief…” See that you do not despise one of these little ones [children], for I say to you that their angels in heaven are continually in the presence of my heavenly Father.”

It is a fact that as children grow up this blind trust and unconditional love towards an invisible yet extraordinarily reassuring presence fades.  How many adults still pray to their guardian angels? Do they even believe they have them?  It may be perhaps that they are irrevocably associated with younger people as the well-known prayer testifies…

‘Angel of God, my guardian dear

to whom God’s love commits me here,

ever this day be at my side,

to light and  guard, to rule and guide

It is interesting that the most famous of angels (after Michael) Gabriel, brought a very adult message when he appeared to Mary with the news that she was to become a mother, while yet a virgin.  Namely, the mother of God. 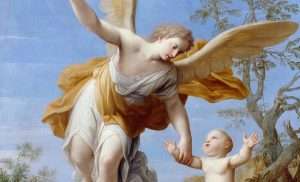 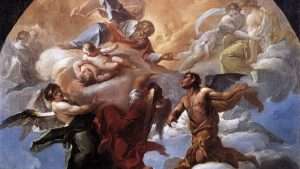 The word itself is derived from the Greek Angelos, which means ‘messenger’.  The official teaching that angels exist as creatures of God is given by the Fourth Lateran Council in 1215 and by the First Vatican Council in 1869-1870. In the Bible, angels function as their name suggests – as messengers of God (2 Samuel 14:17; Kings 19:35; Exodus 14:19) and in the Book of Revelation generally).

Angels remind us that there is more to the created order than what we actually see, feel, hear, and taste.  Since they are intelligent creatures with freedom, angels have the capacity to reject God, as we do.  Those angels which have rejected God are portrayed as demons in league with Satan.  Satan was once that most beautiful prince of angels, Lucifer the light-bearer.  He rejected God through his own pride and was cast out of Heaven. Jesus himself tells us “I watched Satan fall like lightning from heaven” (Luke 10:18). 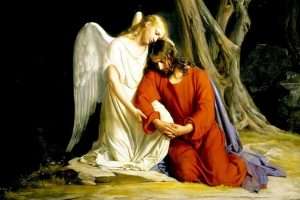 In the garden of Gethsemane on the eve of his crucifixion, Christ in anguish asks the Father if he will “take this cup away from me”.  In answer, God sends an angel from heaven to give him the strength to continue his mission.

Even before Jesus was born angels appeared to Joseph to tell him not to be afraid to marry Mary.  They came to him again afterward on two occasions advising him to take the Holy Family into Egypt and then to return to Nazareth.

It is also angels who announce the birth of the Christ child to the Shepherds. The popularity of the lovely Christmas carols, ‘Angels We Have Heard On High’ and ‘Hark The Herald Angels Sing’ are a testimony to the fascination we have with angels, as well as the bridge they provide between Earth and the Heavenly realm.

The angels will later proclaim Jesus’ resurrection from the dead (John 20:12).  They will also come with Christ on the Day of Judgement (Matthew 24:31). And they will separate the wicked from the just on that Last Day (Matthew 12:49).  Christ also told us that the children of the resurrection will be equal to the angels (Luke 20:34). 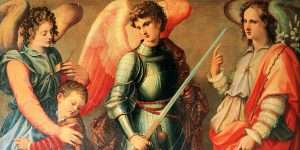 Michael as one of the leading angels is considered “Prince “of the heavenly host and appears three times in the Book of Daniel (10:13, 10:21, and 12:1).  He is the only one in the Bible referred to as an Archangel (Jude 1:9) and serves a major role in Chapter 12 of the Book of Revelation.

The angel Gabriel first appears twice to Daniel (Daniel 8:16 and 9:21).  The Book of Tobit (12:15) names Raphael as one of the seven who stand before the Lord.  Only three of these seven are named in the Bible.  The names of others such as Uriel are named in a book found in the Dead Sea Scrolls, and in the Bible of the Oriental Orthodox Church of Ethiopia.  However, these are outside the Canon of the Sacred Scripture.  The Vatican has banned piety towards angels who do not appear in the Bible as an attempt to ward off the influence of New Age religious movements and other angel-based cults.

Still, all of us do have a Guardian Angel.  According to Paragraph 336 of the Catechism of the Catholic Church:

From infancy to death human life is surrounded by their watchful care and intercession.  Beside each believer stands an angel as protector and shepherd leading him [her] to life.  Already here on earth, the Christian life shares by faith in the blessed company of angels and men united in God.

It must also be stressed that we don’t worship angels, we ask only for their protection by means of the Grace of God working through them.

A feast in honour of the guardian angels was first observed in the sixteenth century.  In 1615, Pope Paul V added it to the Roman calendar.