England is a country that is firmly associated with the Protestant religion because it was its King, Henry VIII who broke from Rome when the pope would not allow him to divorce his wife Catherine of Aragon.  It was Henry’s daughter Elizabeth I whose compromise between Protestantism and Catholicism resulted in Anglicanism, a hybrid of both and a middle way of sorts.

It is true that in the Protestant religions Mary does not have the exalted position she holds in the Catholic Church.  After the Reformation, her position as a mediator between us and God was frowned upon, as were devotion to the Saints.  Ironically, in the Middle Ages Marian piety was so widespread throughout England that the country became known as the Dowry of Mary.

The word ‘dowry’ (from the Latin dos, meaning ‘donation’, ‘gift’, or ‘endowment’) is commonly understood as the donation accompanying a bride upon marriage.  In medieval English law, however, the meaning was reversed, in that a husband would set aside a portion of his estate designated for the maintenance of his wife, should she become a widow.  The historical reference to England as Mary’s Dowry is understood in this sense: that England has been set apart for Our Lady.

Many shrines to the Mother of God existed all over England before the Reformation. The most important of these remains in the pretty little village of Walsingham not far from the coast, in Norfolk, East Anglia. 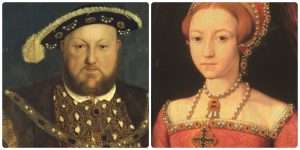 The history of Walsingham and its pilgrimage began in the eleventh century when the lady of the manor, Richeldis de Faverches had visions of Our Lady. Mary requested that a replica of the home in Nazareth be built in Walsingham.

Richeldis was granted a vision of the dwelling and after some initial difficulties, a simple wooden structure was built and became known as the Holy House. This became England’s Nazareth, a place of prayer and reconciliation and one of Europe’s four great pilgrim places in the Middle Ages.  At this time the Church had encouraged people to make pilgrimages to special holy places called shrines.   Many went there hoping to be cured of an illness.  Mary had promised that Whoever seeks my help [in Walsingham} will not go away empty-handed’.

In 1340, the Slipper Chapel was built at Houghton St Giles, a mile outside Walsingham.  This was the final ‘station’ chapel on the way to Walsingham.  It was given this rather quaint name because it was here that pilgrims would remove their shoes and walk the final ‘Holy Mile’ to the Shrine barefoot.

Among the pilgrims to the Holy House were numerous royal visitors, including Henry VIII in 1511 to give thanksgiving for the birth of his son Prince Henry, who would die not long afterward. Henry’s visit is indeed ironic, in view of later events.

When the Church in England split from papal authority the shrines and monasteries were dissolved and their assets commandeered by the crown.  In July 1538 the shrine was closed and its statue was taken to London to be burned.

The place remained silent until the 1830s when the ruins of the wayside Slipper Chapel would be restored for Catholic use. 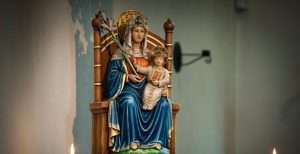 In the 1820s Catholicism in England was decriminalised and Catholic communities began to re-organise themselves after centuries of persecution in 1896, Miss Charlotte Boyd bought the Slipper Chapel which for all that time had been used as a barn, among other things.  She devoted her time to its restoration.

The statue of the Mother and Child was carved at Oberammergau and based on the design of the original statue – a design found on the medieval seal of Walsingham Priory, an imprint of which is in the British Museum.

Our Lady is depicted in a traditional style seated on a simple chair of state with the Child Jesus on her lap.  She wears a Saxon crown in token of her ancient queen-ship and carrying the lily of purity.  The statue emphasises her motherhood and her continual offering of her Son to the world.

The first Mass since the Reformation was offered in the Slipper Chapel on 15 August 1934 and a few days later Cardinal Francis Bourne led a pilgrimage of 10,000 people to the Chapel and declared it to be the Catholic National Shrine of Our Lady.

At about this time too the vicar of the local Anglican parish, Fr Alfred Hope Patten, restored public devotion to our Lady of Walsingham and re-ignited Anglican interest in a revival of the pre-Reformation pilgrimage.  He had a statue of her placed in a shrine in the parish church. 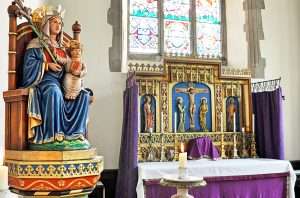 Walsingham is unique as a Marian place of pilgrimage in that it has both Anglican and Roman Catholic Shrines.  Thus does it represent ecumenical cooperation between the two Churches.  The Shrines continue to flourish together sharing England’s common ground.  People can begin their pilgrimage at the Slipper Chapel before journeying the Holy Mile to the priory ruins and the nearby Anglican Shrine.

It is not uncommon for the priests of the Catholic Shrine to preach at the Anglican Shrine, and vice-versa.   For example, in 1980 10,000 Catholics accompanied Cardinal Hume and his bishops to Walsingham.  After venerating Our Lady at the Slipper Chapel, they processed to the Anglican Shrine to pray for Christian unity.  That same year 15,000 Anglican pilgrims, led by the Archbishop of Canterbury, visited the Slipper Chapel to light a candle and offer the same prayer.

In a country whose turbulent and bloody religious history resulted in the persecution of Protestants (in Mary Tudor’s reign) as well as Catholics, Walsingham stands as a beacon of hope and reconciliation; a call to love one another and recognize what we share rather than that which divides us.