The Rosary is a much-loved prayer of the Catholic Church and probably the most popular after the Our Father. Its purpose is to help us meditate on the great mysteries of our salvation. In it, we immerse ourselves in Christ’s life from birth, through death, to his glorious Resurrection. It is a celebration of the mysteries of the life and death of Our Lord and Our Lady’s special place in cooperating with her son in our salvation.

It is a Marian devotion but its purpose is always to focus us on her son. Mary was with Christ throughout his life; she carried him in her womb; brought him into the world in the stable; tended to him as a child; watched him grow up, preach, perform miracles, suffer and die and finally conquer death in the resurrection. She is the dearest and the most perfect guide for us to the life of Christ.

The Rosary is very close to the hearts of many people and a lot of families, especially in Ireland in earlier times, said it together around the fire every evening. Some people recite it daily.  I have seen a woman on the bus doing so and quite a lot of people say it in Church before Mass.  Special groups gather in churches to offer it in prayer together, although with the Covid-19 restrictions such activity is not possible at the moment.  You will find beads in peoples’ bags, pockets, wallets, bedside tables, on the mirrors of cars and large ones can even be draped around headstones.

Also popular is the use of a Rosary ‘ring’, small enough to fit comfortably on the finger.  The Rosary ring carries only one ‘decade’ of 10 small grooves or notches, with a small dividing marker often in the form of a cross. 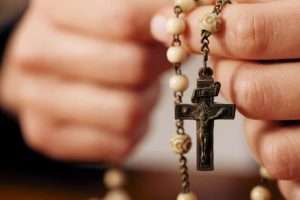 The origins of the Rosary go far back in time.  By at least the ninth century, monks used to recite all 150 psalms, at first every day, but later every week as part of their prayers and devotions.  One way they kept track was to count out 150 pebbles and then place one pebble in a container or pouch as they said each psalm.

People living near the monks wanted to mimic this devotion, but due to lack of education could not memorize all the psalms.  Printed copies, even if individuals could read, were not available as the invention of the printing press was centuries away.  So Christians began to pray 50 or 150 Our Fathers (or Paternosters) each week instead of the psalms.  In order to keep count of the Our Fathers, they often used string with knots instead of counting on rocks.  Later the knots gave way to small pieces of wood and eventually to the use of beads.

There are divergent views regarding this most beautiful of Marian devotions. Many scholars and theologians conclude that it is the outgrowth from the early monks saying the psalms, but some differ in regard to the identity of individuals contributing to the growth throughout the centuries. 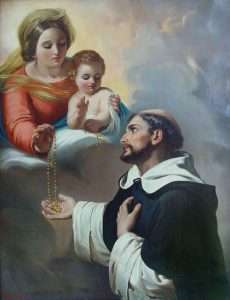 There has long been a tradition in the Church that St Dominic de Guzman (1170-1221) is the source of the Rosary. Dedicated to preaching Christ and the faith he loved, he founded the Dominican Order for that purpose. His principal work was to preach against the Albigensians, heretics who were committed to the dualist doctrine that the material world is bad and that it was made, not by God, but by an evil anti-God. Dominic and his followers were the only ones who managed to prevail somewhat against this heresy.

Legend has it that one day feeling despondent at his lack of success in convincing them to return to the practice of their faith, he was praying to Our Lady in Prouille when she appeared to him and gave him the Rosary, saying, “Dear Dominic, go among the people and teach them my prayer.”

While it is not historically proven that Dominic actually initiated devotion to the Holy Rosary he did introduce the process of devoting meditations on particular mysteries to each decade.  The description ‘Dominican Rosary’ is justified because the Friars simplified and standardised a universally treasured prayer in the course of their preaching, and founded Rosary Confraternities.  The Dominican Pope St Pius V did much to foster the devotion and instituted the Feast of Our Lady of the Rosary on 7th October to thank her for saving Christendom from the Turks in the decisive battle of Lepanto in 1571.  The papal bull Consueverunt Romani Pontifices in 1569 encouraged the universal use of the Rosary.

Another pope St John Paul II said ‘The Rosary is a prayer of great significance, destined to bring forth a harvest of holiness”.

From the 16th century until the 21st century there were 3 sets of mysteries: the Joyful, the Glorious, and the Sorrowful.  But in 2001 Pope St John Paul II added the Mysteries of Light.  The intent was to include meditations on the time in Jesus’ life between his incarnation (a Joyful Mystery) and his passion (a Sorrowful Mystery).