Gospel Conversations by Desmond O’Donnell, OMI is available from Dominican Publications for just €9.99 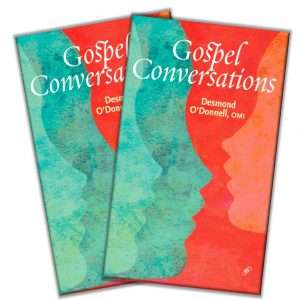 Gospel Conversations, a Dominican publication , was written by Desmond O’Donnell, OMI and is a collection of imaginary exchanges between various characters from the New Testament.  The aim of the book is to enable the reader to engage more fully with the people who were influential in the life, death, and resurrection of Jesus Christ.  These include John the Baptist, Mary, Joseph, Mary’s parents, Peter, John and Mary Magdalene.

The meaning of unfamiliar words and names are provided by a helpful Glossary at the end of the book.

The author is an Irish Oblate priest and a professional psychologist who ministered for twenty-eight years in Australia.

The story, or in this case stories, are told in two diverse and interesting ways: one takes the form of dialogues, the other sessions with a counselor and client.  This is effective on many levels.

Firstly, it enables the writer to inform his readers in a very direct and gripping way.  Our interest is captured because we are drawn immediately into the world of the character concerned and we can instantly engage with them.   In our times we have a lot of exposure to the world of counseling so this a familiar and accessible means of communication.

Most of us, from Religious Education in school and church attendance over the years, have the ‘bare bones’ of what life was like in Palestine 2,000 years ago.  Fr O’Donnell provides us with a lot of what is missing.  You come away ‘knowing’ so much more about the customs of the time without the feeling that you have had to ‘learn’ anything.

Each piece stands alone and you can dip in and out according to individual interest.

The first and second conversations take place between John the Baptist and Ezra, the editor from the Galilee Gazette.  In the beginning, John is in prison awaiting King Herod’s decision with regard to his fate.  By the end, he is being led away to his execution.

John explains to Ezra in detail why Jesus is different and what his real message is. It has nothing to do with an empty ritual or obeying a corrupt priesthood.  Jesus’ mission is to remind people of God’s fidelity and promises to them in the Covenant. He provides us with a lot of background information about the Essenes, the Pharisees and the Sadducees in a comprehensive way, which helps explain the motives and the very thinking of the people who surrounded Jesus.

The importance of Baptism is very neatly illustrated when John tells Ezra, who is thinking about being baptised, that that is not enough.  His baptism may only be with water but it symbolises radical commitment, not just empty observance.  In the event, John is taken away for execution before He can baptise Ezra.

The first conversation takes place between Mary and Elizabeth and gives us an insight into the position of women or rather non-position.  They were not permitted to study scripture so Joseph had to explain to Mary what the Messianic Promise meant.

This theme is picked up again in a later conversation between a Priest, Scribe, Sadducee and a Pharisee who are discussing the fact that Jesus spends a lot of time in the company of women.  The Pharisee comments “Our entire society could be undermined if women begin to find some measure of equality with men”.  A rabbi was not supposed to talk to, or even be seen with a woman in public. 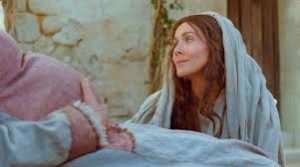 In these conversations and particularly in the Resurrection Experiences dialogues between Johanna, Susanna and Mary Magdalen we are transported into a world where women were seen as lesser beings.  This helps to illustrate how different Jesus was in outlook with regard to others and to the issues that were really important.

This is shown very clearly when the Good Samaritan goes to consult a counselor.  Not only do we find out the reasons why the Jews and Samaritans were in such bitter conflict we also learn that the priest and Levite had passed the wounded man by on the roadside for religious reasons.  The Samaritan realises that the practical care of someone in need is more important than religious duties.

In the conversation which precedes this in the book, between Two Pharisees, Nicodemus and Simon, Nicodemus echoes this when he makes the point “As I purify my dishes at home I am reminded that he [Jesus] said we are like people who wash only the inside of the dish.  He accused us of being full of greed and wickedness.”

There are many such links between the written pieces and they all illuminate and increase our appreciation of the world in which Jesus lived, as well as the prejudices he tried to break down.

Gospel Conversations is not only an enjoyable and informative read, but it could also be a valuable educational resource for schools.  There are little touches and asides in the pieces that students could readily identify with.  E.g. when John the Baptist is talking, at one point he mentions that he and Jesus used to play together as children.

Elizabeth tells Mary that she almost fell she was in such a hurry running down the valley to meet her.  She advises Mary to take a bath after her long journey, using the olive oil made from their own olive grove which had great growth that year. The Samaritan, when talking to the counsellor refers to his relative Aquila, who turns out to be none other than the woman who encountered Jesus at Jacobs’ Well!

All this brings the characters even more vividly to life and the format of the book is ideal for dramatization, providing as it does many roles in which a class could easily make their own.

Gospel Conversations is available from