Every year on April 22, Earth Day marks the anniversary of the birth of the modern environmental movement in 1970.  Its aim is to raise awareness of the negative impact our actions as human beings have on the environment and the earth as a whole.  Since it began in 1970, Earth Day has continued to grow in importance and is now celebrated as a world-wide phenomenon, concentrating on promoting clean living and a healthy, sustainable habitat for people and wildlife alike.

People are responsible for causing changes in the environment that hurt animals and plants.  As we take up more space on Earth for our houses and cities, habitats of plants and animals have been destroyed.  When an ecosystem has been dramatically changed by human activities – such as agriculture, oil and gas exploration, community development, or water diversion – it may no longer be able to provide the food, water, shelter, and places to raise young wildlife.  This is probably the greatest threat to the variety of life on the planet today.

St Martin, our Patron, loved all living creatures, even going so far as to set up a home for despised strays. He lived in cruel times, but he was an example of care in the fullest sense of its meaning, not just confined to one set of creatures. 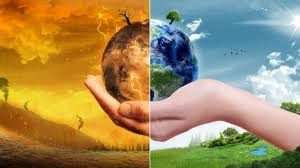 In Harmony with Nature

In a message to mark Earth Day the Dalai Lama (the Spiritual Leader of Tibetan Buddhists) has urged people to “resolve to live in harmony with Nature”.

It is an irony that the phenomenon of COVID19 has meant that people who previously had no practical time to engage with Nature are enabled to do so now.  Many are living in the present circumstances without a calendar and living quietly.  There has been a huge interest in Birdsong with people recording them for radio shows.  The unusual quiet in the cities means that birdsong is more noticeable.  It is also the case that because of the quiet, sound travels more.

Scientists at the University of Surrey have studied the “restorative benefits of birdsong”, testing whether it does really improve our mood. Not surprisingly they have found that it does.

The singing of the birds heralds the start of a new day, the promise of a new beginning, and the coming of light after darkness.  It pinpoints our listening so we can focus completely on what we hear, while cares and concerns fade for a while, into the background.

A farmer I heard interviewed on the radio said, “0n the farm we always hear the birdsong”.  It seems that in the city we have lost our ability to take comfort from this most simple of joys.  He went on to say that Nature was always in the background and always would be. Let us hope so.

Sadly, populations of once-common species such as the house sparrow, starling, and swift are falling fast, while the nightingale, turtle dove, and grey partridge are rapidly sliding towards extinction.

When the Royal Society for the Preservation of Birds was founded, the biggest issue was the slaughter of birds for their feathers, which were used to adorn hats.  Today the problems are far more serious.  Climate change, intensive farming, and pollution are just some of the genuinely existential threats to the future of birdlife. 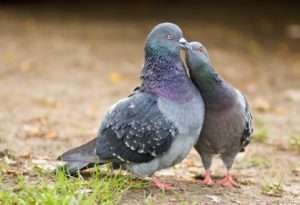 Spending time connecting with the Natural World is the perfect antidote to the pressures of modern life.  Yesterday evening I was sitting at the table, with the back door open so I could see the garden. The sun was shining down and it was very relaxing just feeling its warmth. Earlier I had left out a dish of food for the birds as I usually do.  I was delighted when I saw two woodcock pigeons feeding, as they have a nest nearby, but I rarely see them together.

A magpie fluttered about on the roof of the shed watching them closely.  I was afraid he might ‘see them off’ and take their food.  I have seen two of these same birds intimidating a cat and I know how formidable they can be.  Happily, he flew off on this occasion and left the love birds, as I like to think of them in peace.

I have seen them in the past, preening and ‘embracing’ each other on the fence.  It is fascinating to watch, as indeed all Nature can be.  It is a sad irony that modern life is putting so much pressure on Nature that we risk losing Nature itself.

Is it Us or Them?

Another visitor to my back garden has been a fox.  Over the years these ‘urban foxes’ have been an increasingly familiar sight in our neighbourhoods.  When people decry their presence and are perturbed when they see them, they ought to remember the towns and cities were the foxes’ countryside before we started construction.  The foxes, like the Native American Indians, were there before we invaded their territory.

From New Delhi to Rome the world has become clearer as people stay at home during the COVID-19 lockdown.  All over the world animals are taking advantage of the safe space to search for food or even just to play.  Ducks have been wandering the quiet streets of Paris, while goats in the Welsh town of Llandudno are roaming free.  A herd of fallow deer has been photographed grazing on the lawns in front of a housing estate in east London.  Many have observed that Nature is taking back their spaces.

While none of us would want to extol this terrible COVID-19, it is a fact that the quality of air has dramatically improved with the decline in industrial and other activity.  Even before the Corona outbreak, air pollution killed 7 million people a year.  Will today’s cleaner air inspire us to do better when this crisis is over?

Let’s leave the last words to Tanya Steele, chief executive of the World Wildlife Federation, who has said, “We are the first generation to know that we are destroying our planet and the last one to do anything about it”.