What do great leaders do?  They inspire confidence and trust; they are not afraid to flout the rules and conventions of the time.  Nor are they afraid to fight, even to the point of laying down their life.  They empower their listeners to believe that they can overcome all the odds stacked against them.

When a crisis occurs we need leadership or else we can become like sheep running hither and thither in panic, not knowing what we are doing.  When the government first announced that the Irish people would have to stay indoors, there was panic buying on a wide scale.  This left many supermarket shelves bereft of necessary items, resulting in one group having too much of one item, while another group had none at all.

At its best this is an example of sheep-like behaviour; at its worst, it shows how greedy people can be, wanting to make sure they and theirs are okay and to hell with everybody else. At such times human beings need to feel calm and to be assured that all will be well.  During emergencies, the leaders of countries are closely watched to see how they deal with what has suddenly been thrust upon them.  It can turn the tide in their favour even if they were unpopular, or it can bring out the worst aspects of their characters. 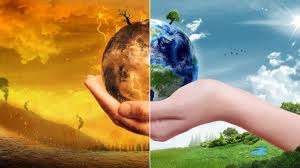 Our Caretaker Taoiseach, Leo Varadkar has been praised for his public speeches on the topic of COVID19, even though he and his Party had been roundly booted out of office in February!

By contrast, the American President, Donald Trump began by saying the Coronavirus was ‘a foreign virus’, and went on to boast that he would have the country back in action by Easter.  He has since been embroiled in power struggles with the State Governors and been met with disbelief and anger, on all sides, for his decision to withhold funds from the World Health Organization. 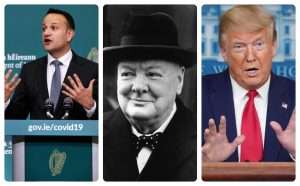 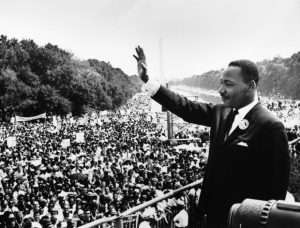 I Have a Dream

The history of the Civil Rights Movement in America is also the biography of Martin Luther King Jr.  King was a leader at every major protest, from the inception of the civil rights campaign for legal equality in the Montgomery Bus Boycott of  1955 to the Poor People’s Campaign of 1968, which marked the turning of the movement towards social and economic issues.

He appeared on the national stage as a charismatic speaker whose blend of moral gravity and emotional intensity could move the hearts as well as the consciences of the white majority.

‘Love thy neighbour’ was a biblical verse that King took to heart.  He and other activists believed that their goal of equality was to be met through nonviolent and peaceful protest, a stark contrast to the violence and hate levelled against African American communities over the centuries which had gone before. 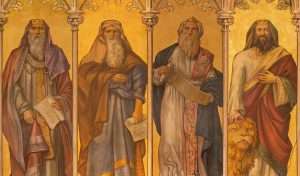 The Greatest of All

Throughout the Old Testament, the prophets were God’s leaders sent to give his people a sense of direction.  They exemplified the notion of the leader as someone who goes ahead and were a pointer towards the moment when God himself broke into Human History through his son Jesus Christ.

Consistency is one of the qualities of good leadership.  People should not be led in one direction today, and another tomorrow, depending on the latest fad.  From the very outset of his mission, Jesus had a very clear mandate and message and nothing could deflect him from that.

His was a very definite and confident leadership that inspired confidence and loyalty in those who followed him.  His form of leadership was so totally different from that to which the people were familiar.  When he washed the apostles’ feet, he told them that his leadership was one of service.  The greatest one among them is the one who serves.

In Jesus, we have a leader as well as a plan and purpose for life.  This is a truth we need to hold onto now more than ever before.