Sometimes, when I am watching a film or TV series based in New York, I am saddened when the Twin Towers appear in the background.  Not only does it date the program as pre-2001, but it is also a reminder of a time when what happened on 11 September nineteen years ago, was unimaginable.

On that bright, clear, Autumnal day al Qaeda terrorists aboard three hijacked passenger planes carried out coordinated suicide attacks against the World Trade Centre in New York City, and the Pentagon in Washington, D.C., killing everyone on board the planes and nearly 3,000 people on the ground.

A fourth plane crashed into a field near Shanksville, Pennsylvania, after passengers and crew attempted to wrest control from the hijackers.

I remember vividly the horror of watching one of the planes hit the tower and also the expression on the face of President George W. Bush on being told what had happened.  He was informed of the multiple terrorist attacks on US soil while he was reading a story The Pet Goat to children at the Emma E. Brooker School in Sarasota, Florida.

He gave a short press conference at 9.30 that morning before being moved to a secure location onboard Air Force One.  The attacks would define his entire presidency and overshadow everything else he achieved. 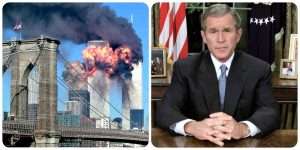 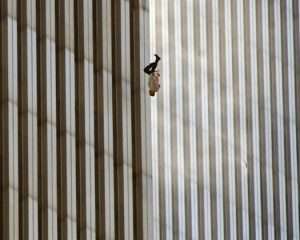 Each of the famous landmarks of the Twin Towers stood 110 stories high and within an hour and 45 minutes, both had fallen.  Mayor Rudolph Giuliani called for the evacuation of Lower Manhattan south of Canal Street, including more than one million residents, workers, and tourists, as efforts continued throughout the afternoon to search for survivors at the World Trade Centre site.

The 9/11 attacks not only became the single deadliest terrorist in human history, they were also the deadliest incident ever for firefighter, as well as for law enforcement officers in the United States.  At the World Trade Centre, 2,753 people lost their lives after the planes slammed into the tower.  These figures include 343 firefighters and paramedics, 22 New York City police officers, and 37 Port Authority police officers who were struggling to complete an evacuation of the buildings and save the office workers trapped on higher floors.

There were many distressing and ultimately iconic images of people descending to their deaths, probably during the crush to get out, or maybe to escape being burned alive. It is too troubling to imagine what their state of mind must have been like during those final few moments. 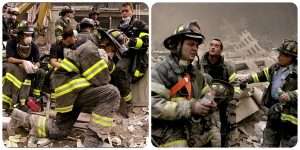 Thousands of first responders and people working and living in lower Manhattan near Ground Zero were exposed to toxic fumes and particles emanating from the towers as they burned and fell.  By 2018, 10,000 people were diagnosed with 9/11 – related cancer.

Rubble covered the tracks of the New York City Subway #1 and #9 lines in the Cortland Street station under the World Trade Centre.  The City Transit Officials determined that the damage was so expansive, that more than one mile of the line would have to be rebuilt.

Rescue attempts at Ground Zero continued until October 9, and the flames from the collapse burned until December 20.

The attacks started the “War on Terror” targeting al Qaeda and its leader Osama Bin Laden.  It was President Barack Obama who would eventually bring him down in a raid by Navy Seals in May 2011.

Khalid Sheikh Mohammed was the key operational planner of the attacks. It was he who dreamed up the tactical innovation of using hijacked planes to attack the USA; al Qaeda provided the personnel, money, and logistical support to execute the operation and Bin Laden wove the strikes on New York and Washington into a larger strategic framework of attacking the “far enemy” –the US – in order to bring about regime change across the Middle East.  America was being ‘punished’ for her support of Israel, involvement in the Persian Gulf War and continued military presence in the Middle East Khalid, along with four other men is due to be brought to trial on January 11, next year, 2021. 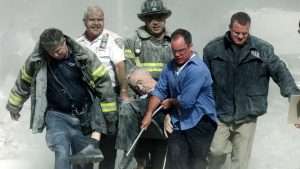 The first body to be released from Ground Zero was that of Fr Mychal Judge, A Franciscan priest, born in Brooklyn, to parents who both came from Co Leitrim.  In 1992 he had been appointed as chaplain to the New York Fire Department, an assignment he loved.

On that fateful day, Fr Mychal walked into the World Trade Centre to perform last rites and never walked out.  He insisted on staying with the injured and dying to provide them with comfort.  It was while he was administering the last rites to a firefighter that he was struck by falling debris and fatally injured.

The image of his body being carried from the rubble became another iconic image of 9/11.  The Philadelphia Weekly reported that the photograph is “considered an American Pietā”.

The medical examiner, recording the priest as the first fatality of the day assigned him the number DM0001-01, the letters D and M standing for Disaster Manhattan.  Many in the Fire Department of the city of New York saw in it a special symbolism.  Fr Mychal was at the head of the line to welcome victims into Heaven.