On the fifth of this month, we celebrated the feast of St Teresa of Calcutta, fondly known to almost everyone as Mother Teresa.  The woman who for much of her life was described as “the living saint”, was canonized on September 4, 2010.

Teresa, forever associated with India, especially Calcutta (now known by its local Bengali name, Kolkata) was actually born in Albania, in modern-day Skopje, Macedonia, and christened, Anjezeë Gonxhe Bojaxhia.  She was only twelve years old when she became convinced that God was calling her to devote her life to working for Him. From an early age, she had been captivated by stories of missionaries working abroad.

We in Ireland have a special connection with her because when she left home in 1928, aged eighteen, to join the Sisters of Loreto it was to their Abbey in Rathfarnham that she came, to learn English with the view to becoming a missionary.

Her ties with Ireland remained strong.  At the height of the ‘Troubles’ in 1971, she sent a group of her sisters to Belfast to help in whatever way they could.   She was given the freedom of Dublin in 1993. 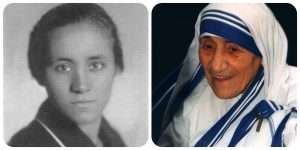 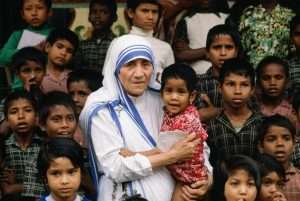 When she left Ireland she moved to Darjeeling where she taught at St Teresa’s school.  Her next post was at St Mary’s in Kolkata, at an all-girls high school attended by rich children.  She remained there for fifteen years.  It was a growing concern with the poverty outside that led to a moment on a train between Darjeeling and Calcutta in 1946, where she believed she received a message from God.  She later explained, “I was to leave the convent and help the poor while living among them.  It was an order.  To fail would have been to break faith.”

In 1948 she started teaching poor children and opened her first slum school. The following year she got permission from the Vatican to found a new religious order, the Missionaries of Charity and in 1952, she opened her first home for the dying at Kalighat in South Kolkata naming it Nirmal Hriday (Pure Heart).  It provided assistance and healed the suffering and the sick, the destitute, and the dying.  In 1957, she began her work with lepers for which her order became well-known around the world.  When she received the Pope John XXIII Peace Prize in 1979 she used the money to build a leper colony. 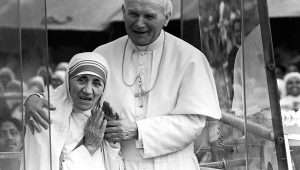 To the outside world, it might be assumed that the highest point of her career came in 1979 when she was awarded the Nobel Peace Prize for her work with the destitute and the dying.  However, for the tiny Albanian nun, the event she most cherished was when Pope John Paul II visited her hospice in Kolkata during his pilgrimage to India in 1986, after which the two became close friends.

He prayed at Nirmal Hriday and then, led by Mother Teresa stopped at each of the 86 patients, spoon-feeding the sick and the dying.  At the end of his visit, he said: “Nirmal Hriday is a place of hope, a house built on courage and faith, a home where love reigns.”

After this visit, the two became close friends and Mother Teresa frequently appeared at Vatican ceremonies at the pope’s side until her death.  It was during an audience with him in 1983 that she suffered a heart attack.  This was the first of several and would lead eventually to her death from heart failure on September 5, 1997, at the age of eighty-seven. 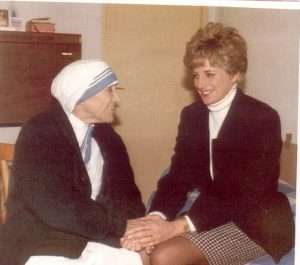 To some extent, her death was overshadowed by that of Princess Diana, who was killed in a car crash in Paris, five days before on August 31. The media could not get enough coverage about Diana and her funeral took place the day after Mother Teresa’s death.  An estimated 2.5 billion people worldwide watched the event making it one of the biggest television events in history.

Diana had also been a friend and it is believed she was buried with a rosary bead given to her by Mother Teresa.  Sadly, Mother Teresa had her critics too, some quiet virulent.  Arguably a lot of this was fuelled by her strong stances on abortion, contraception, and divorce.  No matter the strength of opinion nobody can deny her great legacy.

At the time of her death, her Missionaries of Charity had over 4,000 Sisters, and an associated brotherhood of 300 members, operating 610 missions in 123 countries. These included hospices and homes for people with HIV/AIDS, leprosy, tuberculosis, soup kitchens, children’s and family counseling programs, orphanages, and schools.

Former President of the United States, Ronald Regan put it best when he said in 1985, “Most of us talk about kindness and compassion, but Mother Teresa, the saint of the gutters, lives it.”