October The Special month for the Missions.

Two years ago on World Mission Sunday, Pope Francis said: “For the month of October 2019 I ask the whole Church to live an extraordinary time of missionary 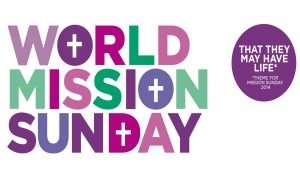 activity”.   He also explained that it would mark the hundredth anniversary of Pope Benedict XV’s Apostolic letter, Maximum Illud, a document on the Church’s mission to bring to the world the salvation of Jesus Christ, which he described as prophetic and far-sighted.

When that document came out in 1919, the devastating First World War had just ended, the Spanish flu was raging in many places and there was a sense that the old colonial world was ending with borders and empires collapsing.  The emphasis of the document was on the fact that in spite of all this upheaval, the Christian message stood strong and had the potential to unify.  He wanted to reiterate those words of Jesus at the end of the Gospel;  “Go, therefore, make disciples of all the nations; baptize them in the name of the Father and of the Son and of the Holy Spirit and lead them to observe all the commands I gave you”.

Pope Francis’s predecessor, Pope Benedict declared that mission is not only for missionaries: all Catholics are to participate through prayer, support of vocations and financial assistance.

Indeed all our recent popes have stressed two very important points, that the momentous mandate of Jesus is still far from accomplished and that all Christians are called to be missionaries and to share their faith with others.

Pope Francis reminds us that ‘through our Baptism, we are made sharers in the mission of the Church,’ and to highlight this he has proclaimed that the theme for Extraordinary Mission Month is ‘Baptized and Sent – Christ’s Church on Mission in the World.’  Our baptism gives us a responsibility to share our faith.  In fact Pope Francis says if we wish to strengthen our faith, we must share it. 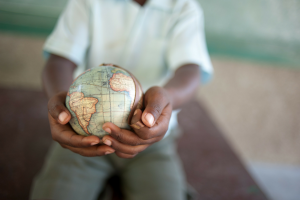 The word ‘mission’ originates from 1598 when the Jesuits sent members abroad.  It is derived from the Latin missionem – missio, meaning ‘act of sending’ or ‘mittere’, meaning ‘to send’.

We are of course familiar with the word in other contexts. E.g. an important assignment given to a person or group of people, typically involving travelling abroad can be sometimes referred to as a fact-finding mission.  Someone is described as ‘being on a mission’ when they are considered to be on a very important duty.  In recent times, it is certain people were on a mission to reveal the cruelty involved in the Greyhound Sector.  In similar situations people go on undercover missions to infiltrate groups and expose corruption and evil.

On the other hand, we also have the notion of an operation that is assigned by a higher leadership so during wartime ‘the planes were on a bombing mission’.

There is, of course, a world of a difference between all these examples of the concept of mission. We could be cynical about some fact-finding missions, where in some cases it has been proved that those who went knew more facts about the local pubs than they did about what they had been originally sent to investigate!  And of course, a bombing mission inherently contradicts the whole Christian ideal of loving your neighbour!  The heart of real Christian mission is an outpouring of love, from one human being to another, when we are walking in true faith.

Ireland, ironically, is mission territory itself nowadays, and one striking feature of the Irish landscape in recent years has been priests, brothers and sisters coming from abroad to help preach the Gospel and support the Church here.

Of course, we are also called to be a missionary in our own lives.  We do have to go to the far corners of the earth; every time we step outside our door we encounter others.  The manner in which we conduct our dealings with them is evidence of whether or not we can be seen to be emissaries of Christ.

Two who went out

This year we have had two very different examples of what it means to be a missionary.  In March an Irish nun, from the Loreto Order, Sr Orla Treacy, received the ‘International Women of Courage Award’ for her outreach work and educational mission in South Sudan.  It was presented by US Secretary of State, Mike Pompeo, while First Lady Melania Trump spoke at the ceremony.

As principal of Loreto Secondary School in Rumbek in Lake States, considered the premier girls’ school in the impoverished country. Sr Orla has spent well over a decade empowering thousands of pupils through education, despite ongoing civil conflict and discrimination against young women, such as forced marriage. 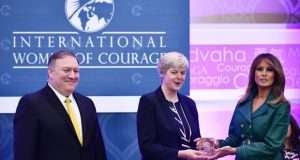 Ragheed Ganni (1972- 2007) was a Catholic priest who was murdered along with three sub-deacons in Mosul in 2007.  He had just finished celebrating evening Mass and was walking away from the church when his group was stopped by unknown men.  One of them demanded to know why Ragheed who was Parish Priest had not closed the Church as he had been ordered to do.  The young man replied, “How can I close the house of God?”  The gunmen demanded that the four men convert to Islam and when they refused, shot them.

Former President Mary McAleese who befriended Fr Ganni , after originally meeting him when he was volunteering at Lough Derg as a young seminarian asked, him if he would contemplate returning to Ireland after he had finished his studies in Rome.  However, he told her he was determined to serve the Christian community in his troubled homeland.  He knew how dangerous it was, but he was convinced that his vocation and his mission lay among his own people and family and it was to them he wanted to bring pastoral help and comfort.

Down whatever roads the Christian mission brings people they always have the inspiration and comfort of those other words of Jesus,  “And know that I am with you always, yes, to the end of time.”