This month on Tuesday 22nd, we celebrate the feast day of St Pope John Paul II. From the beginning of his reign, he captured public imagination coming as he did from Poland, long under the jackboot of a Communist regime.  His election was a symbol of the Church triumphant as signaled in the words of the Polish Communist leader, Edward Girek who wryly observed, “A Pole has become pope.  It is a great event for the Polish people and a great complication for us.” As it turned out his words were prophetic because the pope would go on to play a central role 1980s in the eventual downfall of Communism in Eastern Europe. 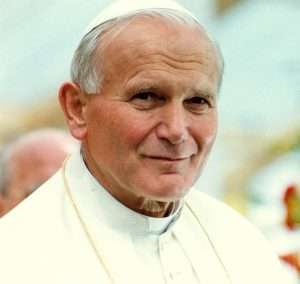 Born in Wadowice on May 18, 1920, and christened Karol Wojtyla, John Paul’s early life was marked by two great losses, that of his mother when he was nine and his older brother Edmund when he was twelve.

Growing up he was athletic and enjoyed, skiing and swimming.  In 1938 he went to Krakow’s Jagiellonian University where he showed an interest in theatre and poetry. Sadly, the next year the place was closed by Nazi troops during the German occupation of Poland. Realising by this time that he wanted to become a priest Karol began studying at a secret Seminary and at the end of the war re-located to one in Krakow and was ordained in 1946.

He began a lively pastoral activity, above all with young people and workers. When he was just thirty-eight years old he was nominated as an auxiliary bishop to Krakow and became Archbishop after having actively participated in the Second Vatican council in 1967.  In the same year, he was nominated Cardinal by Pope Paul VI. Elected Pope on October 16th, 1978 he would go on to have the second-longest reign in the history of the Papacy.

As pope, John Paul gave strong importance and great input to ecumenical dialogue and he worked towards the unity of all Christians.  In 1979 he 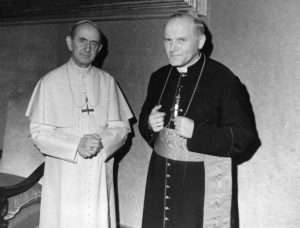 went to Turkey to meet the Orthodox Patriarch of Constantinople.  In 1986, he made a gesture of reconciliation, being the first pope to ever go to the synagogue in Rome where he prayed together with the Jewish people and referred to them as brothers.

Every place he went his goal was to preach the gospel and to reach out and remind those who listened to him that we are all children of God loved by our Father.  This was an evangelization which finally toted up more miles than a round trip to the moon!  He made 104 trips outside Italy and visited 131 countries on all of the continents.

On May 13, 1981, the world was shocked to hear the news that an attempt had been made on the pope’s life.  The would-be killer, a young Turkish 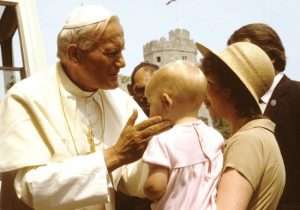 man, Mehmet Ali Agca opened fire on John Paul’s vehicle with a large Browning handgun.  The pope was hit in his abdomen and left elbow.

Four days after the shooting, while still in a critical condition, the pope forgave his assailant.  He asked people “to pray for my brother, whom I have sincerely forgiven.”  His sturdy constitution served him well, and his convalescence from a grave condition was relatively quick, though at one point he suffered an infection that nearly killed him.

Pope John Paul credited Our Lady of Fatima with saving his life.  To him, it was no coincidence that May 13 was the anniversary of the first of the apparitions in 1913. Given the date it may have been no surprise that John Paul showed such gratitude to Mary, but what did shock many was that he not only forgave Agca but also visited him in prison in 1983. They had a private conversation in the prisoner’s cell and a photograph of the two was reproduced on the front cover of Time magazine.   It remains one of the iconic images of the twentieth century.

For nearly ten years before his death, the pope had suffered from Parkinson’s disease and declining health.  In his final months, he underwent a tracheotomy which resulted in problems swallowing.  He eventually suffered septic shock caused by a urinary tract infection and the collapse of his cardio-circulatory system.

On the morning of his death, April 2, 2005, John Paul received Mass, and at 3.30 in the afternoon murmured in a very weak voice in the Polish language, “let me go to the house of the Father”.  Just before 7 p.m., he slipped into a coma and according to Polish tradition, a small little candle illuminated the gloom of the room as the pope finally slipped away.

At his funeral, many testified of their pain, as well as their gratitude and admiration for this much-adored pope, so much so that an emotional collective cry rose up: “Saint Immediately”. After his beatification ceremony on 1 May 2011, his body was moved from the Vatican Grottoes, where it was laid to rest in 2005, to the Chapel of St Sebastian inside St Peter’s Basilica.   He was canonized by Pope Francis on 27 April 2014, together with that other much-loved Pope John XXIII.