This week we are preparing for Easter Sunday, the highest point in the Liturgical Calendar of the Church.  This is the culmination of the Lenten journey and the day that makes sense of all that went before, some of it dark and terrible.

In the Exsultet we are told ‘This is the night that expels all evil…the night that brings mourners joy…the night when heaven is wedded to earth and when we are reconciled with God.  The victory of Jesus will reverberate for all eternity.’  Everything will be set right from Lucifer, to Adam and Eve, to our present day.

Belief in the Resurrection, belief that God raised his Son, Jesus from the dead, is the bedrock of our Christian faith.  Everything else we believe in as Christians is grounded on that truth and, as St Paul says, if that isn’t true, if Jesus wasn’t raised from the dead, we are the most deluded of all people. What we believe is based not on wishful thinking or natural optimism, but rather on the promises of Jesus, guaranteed by his Resurrection. 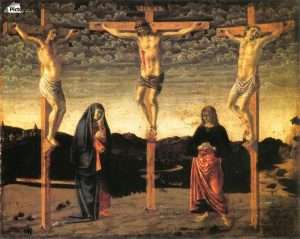 There is nothing particularly ‘good ‘about what happened on ‘Good Friday ‘,or at least so it would seem.  The harrowing images of the suffering endured by Jesus, the fear of the disciples, the distress of the women, mark a day when the one who had been regarded as a Messiah is being put to death as a mere criminal.  In human terms Calvary was a total and dismal failure. In the eyes of God it was eternally triumphant.

A martyr is someone who dies for a good cause.  Jesus became a martyr for us and the good cause is our salvation.  The death of Jesus is the one and eternal sacrifice offered for sin.  The blood of Jesus opens the gates of Heaven for God’s people.  It is significant that, just as he died, the graves were opened, the dead arose and appeared to many, and the veil of the Temple was rent in two.  For the first time ever, it is possible for us to enter into the Holy of Holies.

The main service on Good Friday is part of a Triduum, beginning with the Mass of the Last Supper on Holy Thursday and ending with the Vigil on Holy Saturday night, culminating in the glorious celebration of when Jesus was raised from the dead, heralding his victory over sin and death and pointing ahead to a future resurrection for all who are united to him by faith. This makes it very ‘good’. 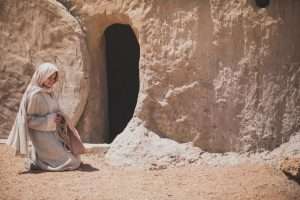 Luke’s Passion Gospel, in particular, shows us a Jesus who died with dignity, every inch a king. His is the only account to include a prayer of forgiveness and excuse for those who hate him, “Father, forgive them for do not know what they are doing.”

To the criminal dying beside him who prays to be remembered when Jesus comes to his Kingdom, he promises, as a royal benefactor that he will be with him that very day in Paradise (23:39-43).  Just as despised shepherds were the first to hear the good news of the saviour’s birth, a condemned thief is the last person to receive the offer of salvation, not at some remote time in the future but ‘today’.

Jesus lived in a culture and age where women were subordinate to men yet it was a woman who was the first to bear witness to the Resurrection, the most important moment in Salvation history, Mary Magdalen.  She had been present at his crucifixion and burial, and the first one to the tomb in the morning, and she remained there when the others left.  Hers was an example of heartfelt and consistent devotion.  It is fitting that she was sent by Jesus to be the first person to bring to the others the news of his Resurrection.

After seeing Jesus she is able to burst out in praise and spread the Good News.  Thus did she merit the title ‘Apostle of the Apostles. 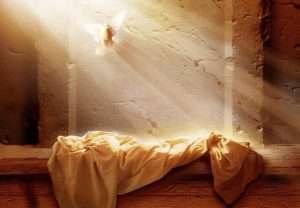 All four Gospels name Mary as a witness to the empty tomb, either alone (Gospel of John) or in the company of other women.  All four describe a vision of angels at the tomb, while Matthew and John describes an appearance of the Risen Jesus.  John describes this in the greatest detail and with real literary art.

There are several reasons why a tomb might be empty: a body might never have been placed in it (eg Jesus was buried in Joseph of Arimathea’s “new tomb”).  It could also be empty because the body had been removed or stolen which was what the disciples feared.  The most unlikely of all is that the dead person has been raised from the dead.

An empty tomb is a powerful symbol.  For the moment the Lord appears absent.  Many have walked away from the tomb heartbroken.  Remaining however are those Easter Morning women and men with shaken faith but also the abiding hope that this cannot be the end.

The empty tomb symbolizes the definitive triumph of goodness over evil, which assures us that, in the end, love will triumph over hate and justice over injustice.

Above all, the empty tomb, speaks of a victory over death, the last enemy of humanity.