People are different, but at Christmas, there is somewhat of an expectation that we will all do the same thing.  The emphasis, of course, at this time is on family. The little family of Bethlehem points us towards the importance of spending time with the people in our lives who presumably know us best and to whom we are closest.

Naturally, family sizes vary. There are some with one child and others with much more in number. Some are one parent; others may have grandparents living with them or close by. Some are very close-knit and supportive; others simply do not get along and this can be a recipe for disaster. 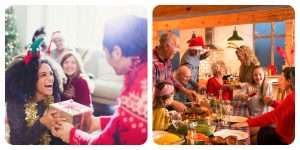 Statistics show that arguments and tensions reach heights which the cosy families of the TV ads simply do not reflect.  Perhaps the Soaps (which I no longer watch) are a more realistic reflection of the gritty reality which can sometimes beset family life at this time!

If one sibling clashes with another on a regular basis, then they are not suddenly going to find their relationship has transformed, simply because it is Christmas Day.  If anything things could get much worse, especially if people who might normally avoid one another are forced into a confined space with extended relatives of varying personalities.

Add too much drink to the mix and an explosion is probably guaranteed.  A YouGov survey of the British population last year revealed that one in three people expect to have an argument during Christmas.

Could this be one of the reasons why some people opt to spend Christmas Day alone?  This may sound like a contradiction, just think of all those holiday songs with titles such as ‘Driving Home for Christmas’ or ‘Wish I was at home for Christmas’.  However, it is a fact that many prefer to avoid the family hearth in order to protect their own mental well-being! Instead, they use the opportunity for a bit of me-time. 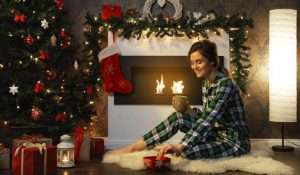 This may be hard to explain when they are asked about their plans for the holiday.  However just because the calendar says a particular day must be set aside for spending time with family, does not mean it is written in stone that everyone has to sit down for an uncomfortable meal with people who make them tense and maybe even bring out their worst side.

Of course, some people will be alone anyway because that is the circumstances of their life at a certain time.  Some are lonely and some are not.  People presume that if you live alone you will automatically feel lonely at Christmas, but this is not necessarily the case.  Unfortunately, not everyone has happy memories of Christmas, and others simply do not want or feel the need to celebrate Christmas in the way that the majority of people do.

A friend of mine who was left alone after her mother died is an example of this.  Her sister is a nun in an enclosed order and she has no other family except cousins in America.  The Christmas after her mother’s death a number of her friends told her she was welcome to go to their homes on the 25th.  She was very touched by all their kindness but turned down each invitation.

Instead, she decided she would spend the Christmas period in Rome, a city she loves.  She did not join a group but just traveled by herself.  She was amazed at the reaction of one of her friends who simply could not understand that she would choose not only to be alone at Christmas but particularly the Christmas after she had been bereaved.

My friend said that although she was touched by how good people were she did not need company as such.  It was her mother she would miss and that would be the same feeling, whether she was alone, or with others.  She had spent many happy holidays in Rome with her mother and she would feel close to her there.  It did not matter that others found it strange; this was just the beat of a different drum that she was listening to. 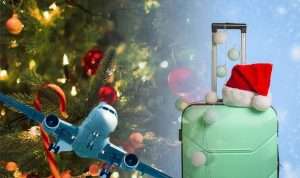 Some people who have happy memories of a home now gone, for whatever reason, may decide to leave the country so they can create a new set of memories for themselves.

Others are chasing the sun, especially those who feel the cold, and most of us do as we get older.  There are many who dread the winters, and for those who can afford it a holiday in the sun is a much more attractive prospect.  You can even show off your tan in January!

A lot of people are simply avoiding all the ‘hype’ around Christmas which is the same every year, except of course the choice of gifts expands and parents, in particular, may have to expand their wallets.

Those of us who hate cooking may simply want to escape the weighty preparation involved in putting together the traditional Christmas dinner with all the trimmings.  And of course, there are those who simply want to experience the festivities of a different culture. 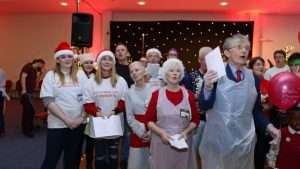 Christmas with a Difference

Then there are the amazing volunteers all over the country who give up their time to brighten Christmas Day for others less fortunate than themselves.

Every year in Dublin the Knights of St Columbanus host a Christmas Day Dinner for the poor and homeless of the city and surrounding areas in the RDS. Around 300 volunteers help to serve dinner and deliver food and goodie bags to those in need.  This Catholic Organisation was set up over a hundred years ago and has spread all across Ireland, north and south

I know someone who has been doing this for a few years now and finds it a very rewarding and thought-provoking experience. Certainly, it is a reminder of what is at the heart of the Christian message, Love Thy Neighbour.

Wherever you are at this Season of Celebration; whether alone or with others, we wish you a very Happy Christmas and all the blessings of this most holy time.