Within the last two weeks the usual headlines regarding Covid-19 have been replaced by another huge news item; sadly not a good one. What should have been a minor incident in Minnesota turned into a world news story, leading to scenes of mass protests and demonstrations across the United States.

On May 26, George Floyd entered a store in Minneapolis to buy a packet of cigarettes.  One of the assistants suspected that the note he handed over was counterfeit and called the police.  A video shows Floyd being arrested and a white police officer kneeling on his neck for several minutes, ignoring his cries that he was unable to breathe.  As a result of this unnecessary restraint, Floyd died.  Police officer Derek Chauvin has been charged with murder and is due to appear in court on June 8.

His death has sparked huge protests also outside the US, with regard to the killings of Afro-Americans by the police. 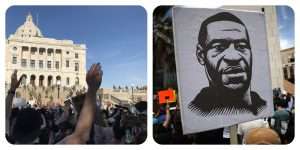 This tragedy is chillingly familiar to the death in July 2014 of Eric Garner in Staten Island, New York.  Garner was approached by the police who alleged that he was illegally selling cigarettes.  One officer grabbed him from behind, putting him in a headlock, which lasted twenty seconds before Garner lost consciousness. In a video of the incident, Garner can be heard yelling “I can’t breathe” eleven times.  An hour later he was pronounced dead at the hospital.  The cause of death was ruled as a compression of the neck but in December a grand jury decided not to indict the officer responsible.  By the end of the year, around fifty protests against police brutality are held across the country.

Since emancipation from slavery, African Americans have been victims of the criminal justice system.  One of the ways that free black labour was retained in the South was to put prison chain gangs to work.  African Americans were subject to incarceration for fines and minor offenses to ensure they would populate the chain gangs. 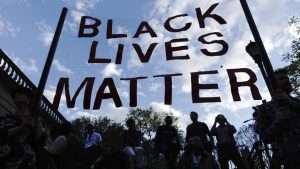 Black Lives Matter, which is now an international human rights movement, began in 2013 as a # hashtag after George Zimmerman was acquitted in the shooting to death of African American teenager, Trayvon Martin in 2012.  As a response to this, an online campaign was founded by Alicia Garza, Patrice Cullors, and Opal Tometi.

The first street demonstration organized by BLM took place in Ferguson, Missouri after an unarmed teenager, Michael Brown was shot and killed by a police officer who noticed that Brown seemed to fit the description of a man, who reportedly stole cigars from a nearby store.  The officer pulled his car next to Brown and after an altercation shot him twelve times.

This murder was the straw that broke the camel’s back in police-community relations.  Stories of police brutality, racism, and the targeting of African-Americans were a reminder that many of the same problems that existed in the original civil rights struggle persist in contemporary America. 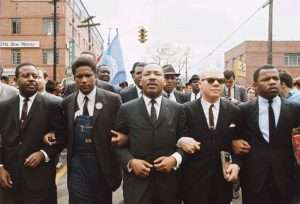 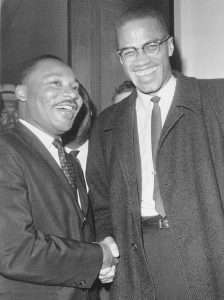 Martin Luther King saw love as the driving force that could end oppression and was the only answer to violence.  He said, “Power at its best is love implementing the demands of justice, and justice at its best is power correcting everything that stands against love.” ‘Love thy neighbor’ was the biblical verse that King took to heart.  Love did not have to be a literal emotional bond, but a powerful force that could be used for good.

However, this policy was not accepted by all of the Civil Rights Movement or the black community.  Some leaders thought that nonviolent protest was adopted because of the overwhelming force of the opposition.  There was no way black communities could take on local police departments or hate groups like the Ku Klux Klan and emerge victorious.

Many like Malcolm X saw King’s pacifism as leaving black people defenseless against white aggression.  Despite his powerful rhetoric, there is a school of thought that believes that leaders like Malcolm X incited or condoned violence in order to make the peaceful protests stand out more.  Segregationists would be more willing to work with a moderate like King when faced with the alternatives of Malcolm X and organizations like the Black Panthers.

When Malcolm X talked about the need to ‘elevate the civil rights struggle to the level of human rights’, what he meant was that black people were not respected as human beings.

The phrase ‘Black Rights Matter’ is the simplest representation of what Malcolm X and Jesse Jackson had in mind.    The golden rule-treat others, as you would want to be treated, is the standard Jesus set for dealing with other people.  Let us hope and pray that the way forward will be a peaceful one and finally force all of us to ask ourselves what it would be like if the injustice was happening to us or our families.  Until human beings learn to truly empathise and put themselves in the shoes of others they will never learn what love means.