On January 27, 1945 the notorious Nazi death camp at Auschwitz was liberated by Soviet forces.  On Monday this week, hundreds of Holocaust survivors joined delegates from world governments, (including our own President Michael D. Higgins) at the site where more than one million people were murdered when the Nazis occupied Poland during World War II.

Of the one point three million people sent to Auschwitz, one point one million died.  Most of these were Jews who were gassed, some on arrival.  The rest died of starvation, exhaustion, disease, individual execution, beatings or as a result of medical experiments.

The site in Poland is now maintained as a museum and memorial and remains the foremost symbol of the Holocaust.  This was a unique event because its goal was the complete destruction of a race by one that viewed itself as superior. 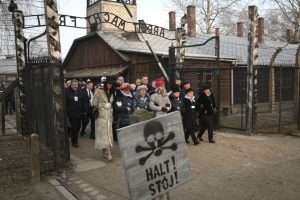 Anti-Semitism in Europe did not begin with Adolf Hitler.  Although the use of the term itself dates only to the 1870s there is evidence of hostility towards the Jews in the ancient world, when Roman authorities destroyed the Jewish temple in Jerusalem and forced Jews to leave Palestine.

With the conversion of the Roman emperors to Christianity and its establishment as the sole religion of the Roman Empire, the refusal of Jews to accept Jesus as the Messiah was viewed as a threat.  Jews began to be perceived as killers of God, because of the crucifixion of Jesus. Medieval Christians believed that Christian children were seized and tortured to death by Jews during the Passover Season.  Many Jews were targeted in pogroms during the Crusades.

Historically, Jews had been pushed into marginal roles considered socially inferior, such as tax and rent collecting and moneylending, occupations only tolerated as a necessary evil.  Catholic doctrine once held that lending money for interest was a sin, and therefore an occupation forbidden to Christians.  Not being subject to this restriction many Jews made this business their own.

Unfortunately, this led to many stereotypes of Jews as insolent, greedy usurpers.  One such well-known depiction is that of Shylock, in Shakespeare’s, The Merchant of Venice.

Tensions between creditors (typically Jews) and creditors (typically Christians) added to social, political, religious and economic strains.  Peasants who were forced to pay their taxes to Jews could see them as personally taking their money while remaining unaware of those on whose behalf the Jews worked. 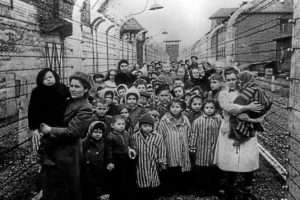 The Protocols of the Elders of Zion

The Protocols of the Elders of Zion were circulated by the Czarist Secret Police in the early years of the twentieth century.  This forged document claimed to be an account of a meeting of Jewish leaders from many nations who were planning to dominate and enslave all humankind and destroy Christianity.  One way would be through manipulation of the economy.

The Russian government used this document to try to focus the anger and hostility of Russians who were suffering under poverty, illiteracy, censorship, and lack of civil rights, onto the Jews.

The Protocols influenced Hitler and also Henry Ford.  They served to rationalize anti-Semitism in Nazi Germany.  The myth of the Jewish World Conspiracy permeated Hitler’s thinking and he linked Germany’s economic hardship during the 1920s to the secret plot.  The Jews were regarded as an inferior race of people and had no place in German society.  The goal of Nazi propaganda was to demonize Jews as the driving force of both international Marxism and Capitalism.  Germans were encouraged to see them as dangerous outsiders in their midst.

This concept has been a problem for the Jews everywhere; the idea that they have dual loyalty to Israel, the Jewish State and their country of birth, with the former being greater. 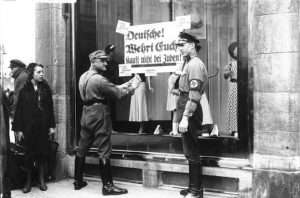 On 1 April 1938 Hitler decreed a boycott of all Jewish shops, businesses, lawyers and doctors.  Stormtroopers plastered Jewish shops and offices with notices warning the public not to enter; others stood as guards outside such buildings.

By spring 1933 Jews were not allowed to enter universities.  Later on, they would be banned from certain professions.

In September 1935 the Nuremberg Laws deprived Germans with Jewish blood of citizenship; forbade under pain of death marriages between Ayrians and Jews and forced Jews to wear a yellow patch in the form of a star on their clothes.  Jewish music was barred and brilliant Jewish musicians were not permitted to perform.

Many Jews went into exile, including theatre and cinema and cinema producers such as Max Reinhart, scientists such as Einstein, writers, and university teachers.

On 7 November 1938, a German Jewish refugee killed a member of the German Embassy in Paris. In reprisal, the Nazi government organized a mass attack on German Jews, synagogues, businesses, and homes were destroyed.  During this Crystal Night, thousands of windows were smashed in Jewish property, and 200 synagogues destroyed.  Thirty-five Jews were killed; about 20,000 were arrested for ‘resisting the forces’.

The final solution to the ‘Jewish problem’ was ordered in 1942 as Hitler decreed the killing of all Jews throughout Europe by mass executions in specially designed gas chambers. 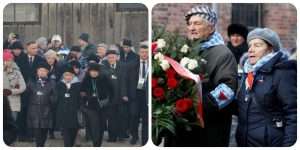 After the war, when the world witnessed the horrors of Auschwitz, anti-Semitism became far less accepted.  Seeing what it could lead to made people and nations ashamed of openly expressing anti-Semitism.   In the case of the Catholic Church, it would eventually lead to real change when in the 1960s, the Church removed the historic charge against the Jewish people of being responsible for the death of Christ.

Holocaust Memorial Day is held not only to remember the millions of victims of the Holocaust but also those who have been killed in other genocides around the world.  In Cambodia, Rwanda, Bosnia and Darfur millions of people have been killed because of who they were.  This day highlights how important it is to tolerate other peoples’ beliefs and differences and not to exclude them or spread messages of hate.