There is a well-known saying that, ‘Behind every great man there is a great woman.’  This certainly applies to St Monica, whose feast day we celebrate last week.

Monica’s son, St Augustine, has been described as the most Significant Christian Thinker after St Paul.  His adaptation of classical thought to Christian teaching created a theological system of great power and lasting influence.  His numerous written works, the most important of which are Confessions (c.400) and The City of God (c. 413-426), shaped the practice of biblical exegesis and helped lay the foundations for much of medieval and modern Christian thought.

However, none of it might have happened had it not been for his mother, for it was through her prayers that Augustine, wayward in his youth, converted to Christianity. 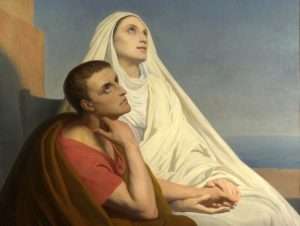 Monica was born in the fourth century, to Christian parents at Tagaste in North Africa.  She was given in marriage to Patricius, described variously as a pagan or as a nominal Christian.  He was unfaithful and had a violent temper although he never actually hit his wife. Their home life was not helped by the fact that his mother, another hot-tempered individual, lived with them.

Most of our information about her comes from Augustine himself in his writings in Confessions (Book IX).  He relays only one incident from her youth, obviously relayed to him by Monica herself.  At that time one of her household chores was helping a maidservant to bring up the wine from the cellar.  She got into a habit of sampling the wine and overcame her initial dislike of the taste.  The maid in a moment of anger with the young Monica, accused her of being a drunkard.  This strong rebuke prompted Monica to change her behaviour and develop the habit of perseverance.

It was her perseverance in prayer for both her son and her husband that brought about a change in attitudes.  Patricius converted in 370 but it was with Augustine that she fought a much longer battle.    For seventeen years after her husband became a Christian, Monica never gave up praying that Augustine would do as his father had done. 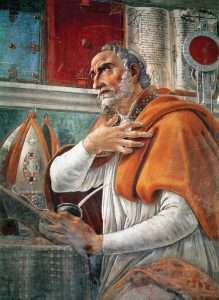 Augustine had disappointed her greatly by choosing a life of pleasure as well as adopting the Manichaen heresy.  Its theological position was that matter was evil and comes from another source, other than the true God. He also lived for fifteen years, with a concubine (a common practice in that culture), with whom he had a son Adeodatus.  Several priests told her that Augustine’s conversion would never happen as his soul was too far from God.   To these Monica replied, “Nothing is far from God.”

One day she had a vision where she seemed to be standing on a wooden beam suspended in mid-air surrounded by a bright light.  She was lamenting over her son’s absence.  A voice asked her why she was crying.  After she had explained the reason she saw Augustine standing next to her and was comforted.  She repeated the vision to her son, and he responded that they might easily be together if Monica renounced her Christian faith.  “No,” she replied, “The voice did not say I was with you.  It said that you were with me.”

Earlier in his life Augustine had studied rhetoric at Carthage University in order to become a lawyer, but abandoned this plan and devoted himself instead to teaching and study.  When he moved to Rome to teach rhetoric he did so in secret because he did not want Monica to follow him.  However he could not shake his mother off that easily and she followed him to Rome and from there to Milan, always trying to convince him to see the error of his ways. 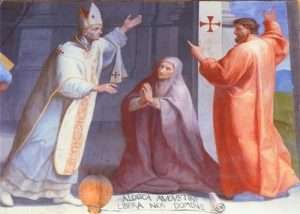 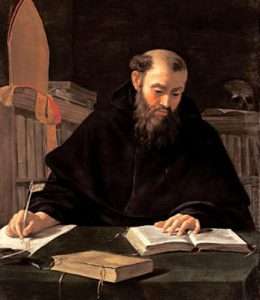 A Change of Heart

It was in Milan that Augustine came under the influence of St Ambrose.  He was the bishop of that city and became one of the most important theological figures of the fourth century.  His preaching impressed Augustine, who having abandoned Manicheanism, was seeking another path.  After meeting Ambrose, Augustine reevaluated himself and was forever changed.  Monica loved Ambrose “as an angel of God who uprooted her son from former ways and led him to his convictions of Christ.” Ambrose in his turn had a very high opinion of Monica.

With Ambrose’s influence, Augustine set about trying to discover a life of celibacy, study, and prayer.  With his mother, son, and friends Augustine retired to a villa to begin his study of the Scriptures and ancient philosophers.  On Easter Sunday, 387, Augustine was baptized by St Ambrose.

Sadly, as the group, en route to Tagaste, prepared to board a ship at the seaport of Ostia, Monica fell gravely ill and died.  Augustine, filled with grief, stayed in Italy for a time, writing and praying. He wrote movingly of her farewell to him as she lay dying.   “Son, nothing in this world now makes me happy.  All my hopes have been fulfilled.  All I wished to live for was that I might see you as a Christian and a child of heaven.  God has given me more: I see you ready to give up everything and become his servant.”

Footnote:  Monica had two other children, Navigus and Perpetua (not the martyr).  Navigus was with his brother during some of Augustine’s life in Italy.  Perpetua was a widow, who eventually became head of a convent.