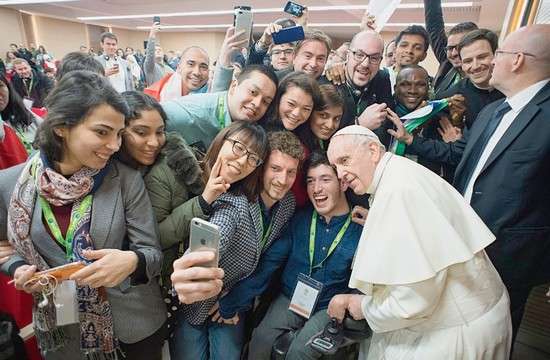 Are you a young person aged between fifteen and twenty – nine?  If the answer is yes, then there is a good chance that you no longer go to Church on Sunday, or any other day, except for funerals or weddings of course.

Any Catholic will tell you the biggest challenge facing the Church today is how to engage young people.   In my day it was the Feminist Movement, but that’s another story!

All over the world large numbers of young people are leaving the Church in their teens.  This is a serious situation, so serious indeed that last October Pope Francis called bishops from everywhere to a meeting in the Vatican to discuss the issue of young people and the faith.  Speaking about his experiences there, the Primate of All -Ireland, Archbishop Eamon Martin of Armagh (find him on Twitter here) , admitted that he finds it difficult to connect with young people who have drifted away from the Church.

Living in a Different World

One of the reasons for this may be the fact that most churches work best with ‘traditional’ young adults who follow the typical path of leaving home, getting an education, finding work, getting married and having children – all before the age of 30.  However young people are living in a different world and many of the events mentioned above are being delayed, done in a different order or not at all. They now have a remarkable access to the world and worldviews via technology and are no longer happy to accept without question the teachings of the traditional authorities.

An inability by the Church to handle this ‘new normal’ shows in the fact that many clergy and religious leaders feel more comfortable working with young married adults, especially those with children.

With same-sex marriage and abortion becoming legal after two Referenda changed the Constitution, more than ever, young people in Ireland are becoming fed-up with the widening gap between Church teaching and what are becoming normal, acceptable things, for a great majority of their friends and families. Rather than feel they are moving away from the Church it may be that they regard the Church as having moved away from them.

A lot don’t follow the Church’s teaching on sexuality believing it to be out of touch with issues such as contraception, abortion, co-habitation, homosexuality, attitudes to women and marriage.  These are issues which the young people discuss quite freely among themselves.

Perhaps they are looking for an authentic Church that is transparent, welcoming and communicative, one that has zero tolerance for sexual abuse and is sincere in admitting past and present wrongs.   Maybe they feel disconnected from their parishes.  After all you can attend Mass but not feel any real sense of community. There are young people who leave for intellectual reasons, because they believe that religion is in conflict with science or that it makes no sense, that its teachings are old-fashioned and a throwback to a more primitive time.

So what, if anything, can be done to change this?  Let’s look at where young people encounter God.  Well the Christian message has normally been spread at Mass.  And here we are up against a definite problem of communication.  Sometimes it comes across as being a one man show, with the priest as the ‘star’ and no one else getting a look-in.  Could this be one of the reasons that young people say the Church is boring?  Well to be honest, and as a much older person, sometimes it is.  You could argue that those of us who have a well-grounded faith can over-look such things, but what of those who don’t.   Priests on the altar tell stories while many of their congregation are into sound bites.  With Facebook, WhatsApp, Instagram and so on young people, in particular, have become more immediate. They have countless podcasts and YouTube videos of pastors, preachers and priests the world over.   Or why not use your smartphone camera to play ‘Follow JC Go’ a Christian take on the 2016 game Pokémon Go.  All these can be accessed from the comfort of your couch with a cup of tea in one hand and a slice of toast in the other!

In the past, sadly there were far too many ”Thou shalt nots”.   This kind of language is off-putting as is the notion of ‘the teaching authority of the Church.’  Many priests relished the power they had over people and power, as we know, in the light of the clerical abuse scandals, is a very dangerous thing when misused.

Before speaking to the young the clergy need to listen to them because those who say they are spiritual but not religious are truly searching for something.  Young people say they want community, but find the Church to be a place more interested in rules and the status quo.  In some places you have the usual, mostly older people doing the same jobs which is never going to turn the tide. Young people must be welcomed and enabled to create their own small Christian communities, some of which will most likely be virtual.

Young people are sensitive to issues around justice, inequality and the environment.  More than anything they want to be of service to others. Parishes could have regular forums and meetings which would allow for community-based activities, such as visiting old people who live alone, getting shopping etc. These could be combined with prayers and Bible studies, an area which has been neglected in the Catholic Church when compared to the evangelical ones.   A leadership which speaks of a particular love for the poor, yet does so from a comfortable middle class position makes little sense.

Finally, young people need to be involved in decision- making processes and offered more leadership roles on a parish, diocesan and international level.   The Church has a message relevant to young people; it is just not getting through.  Whether it rises to the challenge remains to be seen but one thing is certain – time is running out.