Beside my desk, in the office, I have two Noticeboards, one of which I just use for pictures I like, animals, landscapes and photographs.  One of these shows Pope Pius XII with a tiny little bird perched on his hand.  Pius was head of the Catholic Church from 1939 to 1958.

The story behind the photograph I thought was rather touching.  The little bird was the pope’s pet and her name was Gretel.  His gardener had brought him the poor little creature when she landed wounded on the grass.  Pius helped her recover and if he worked too late she would hop over and interrupt him until he went to bed.

It was Pius’ misfortune that he reigned during one of the darkest times in history when the Nazis ruled in Germany and instigated World War II.  These were the most difficult of days, not least for a pope whose reputation would suffer unjustly, and whose critics would condemn without the proper evidence to back their accusations. 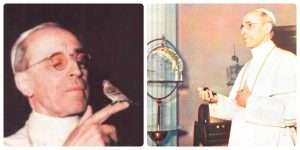 On Monday, March 2nd the Vatican opened its archives for the years 1939 to 1945 to historians and scholars.  This will, of course, turn the spotlight again on to the war-time pope and to the issue of whether or not he did enough to condemn the Holocaust.

It is likely to be many years before conclusions are arrived at given the extensive nature of the contents of the Archives.  Bishop Sergio Pagano, prefect of the Vatican’s Apostolic Archives, said the World War II documents alone ran into millions of pages, divided into 121 sections according to topic.

“The Church is not afraid of history”, Pope Francis said with regard to his decision to open the Archives.  The scholars who will examine all the fascinating material include some from the Holocaust memorial museum in Washington DC and German historian, Hubert Wolf, a specialist on the Pius XII| pontificate.

Salvador Ryan, Professor of Ecclesiastical History in St Patrick’s College, Maynooth has said that historians are not expecting a ‘smoking gun’ from the Pope Pius XII ‘secret’ archives. 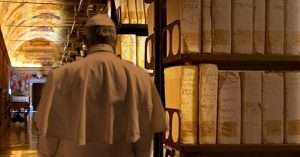 The Role of the Pope

During the war, the Catholic Church, on the instructions of Pope Pius XII, sheltered Jews and other victims of the Nazis, provided falsified travel documents and distributed food and clothing as well as transmitting vital information to the Allied military leaders. But because Pius did not publicly and repeatedly denounce Adolf Hitler, his role became somewhat controversial.

It has long been established that when the Dutch hierarchy condemned Nazi treatment of Jewish people, the reaction took the form of further reprisals against the Jews. The pope, therefore, supposed this would happen if he spoke too publicly.  Hitler would almost certainly have directed his might against the Church and she would have been unable to engage in her life-saving activities.

There were many practical reasons for Pius’ decision to speak softly, to work on the ground to save lives, rather than having the moral high ground in speeches. Official neutrality permitted the Vatican to cross behind belligerent lines to feed, clothe and care for conflict victims.

In February 1963, the play The Deputy had its world premiere and became a cause célèbre because of the way in which it questioned the behaviour of the Pontiff during this critical period in world history.  This was further augmented by John Cornwell’s book Hitler’s Pope, published in 1999 which stated that the pope did not do enough or speak out enough against the holocaust.

Ken Woodward writing in Newsweek, stated that Hitler’s Pope has “errors of fact and ignorance of context [that] appear on almost every page’’. (Newsweek, 22 September 1999) 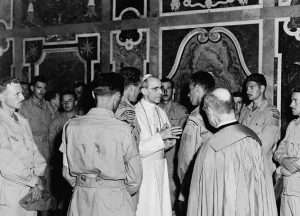 During the occupation, three thousand Jews found refuge at one time at the pope’s summer residence at Castel Gandolfo.  At no other site in Nazi-occupied Europe were as many Jews saved and sheltered as at Castel Gandolfo.  Kosher food was provided and even some babies were born in the pope’s private apartments, which became a temporary obstetrical ward.

When Pius died in 1958 The Jewish Post (Winnipeg) reputed thus:

It is understandable why the death of Pope Pius XII should have called forth expressions of sincere grief from practically all sections of American Jewry.  For there was probably not a single ruler of our generation who did more to help the Jews in their hour of greatest tragedy, during the Nazi-occupation of Europe, than the late Pope.

It is well known that Pius received letters after the war from Jewish leaders and individuals, whose lives were saved by the charitable deeds of churches and convents.  In the beautiful area of the Negev, the Israeli government planted 800,000 trees to commemorate the 8000,000 Jews saved by the actions of Pius XII.

This pope guided the Church, during the darkest, most difficult of days, with a combination of caution, courage, and compassion, proving himself a defender of the Church and a true protector of humanity.