Mary as a Role – Model

The Catholic Church has traditionally dedicated the month of September to Our Lady of Sorrows and on the 8th of this month, we celebrate Mary’s Nativity. Educated by the nuns, I had devotion to her instilled in me from very early days and I remember decorating the May altars in her honour. She has, of course the unique role of being the mother of Jesus Christ and therefore the mother of God.  That would seem to be an awful lot to live up to when we talk about Mary being a role model for women!

I have to admit that growing up I never experienced any ‘closeness’ to Mary, such as I did to some of the saints and certainly to Jesus.  Perhaps she seemed too perfect and if this is so, then maybe she has been portrayed in ways that have done her a disservice?

Throughout Christian discourse the approach to the issue of women, always a problematic one, was resolved by splitting up the female into two distinct figures: Eve (and her heirs) and the Virgin Mary.  These two female ideal types stand in symbolic opposition to one another.

As a ‘daughter of Eve’ woman is viewed as inherently weak and a danger to Man’s integrity.  This female force brings Original Sin and sexuality into the world.  In the Vulgate St Jerome uses the word seducta to describe Eve’s transgression, clearly implying that she used her sexuality to tempt Adam into disobedience.  All this is counter-balanced by Mary, who simultaneously stands for motherhood and purity.

The problem with this is that it is simplistic and unreal; life is just not like that nor are people; reality is always too complicated for the stereotype. It is also of course dangerous, because it has led to justification of discrimination against women.  That as they say is ‘another story’. 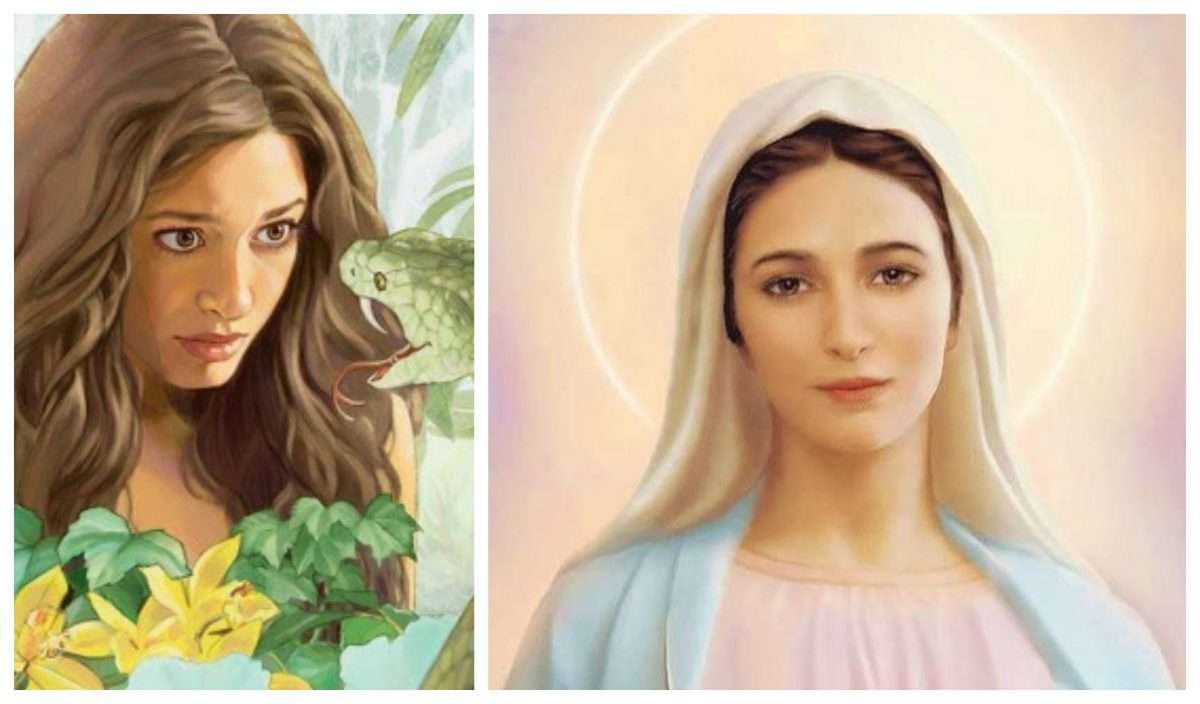 Positioning Mary in polar opposition to Eve in such a fashion, serves only to distance her from our own human experience, placing her at a level which is not only impossible to attain,  but also incredibly difficult to imagine.  Ironically this oversimplification ignores the simplicity of Mary herself who is far more approachable.

Instead, imagine her as a very young girl, probably about fourteen years of age when the angel appears to her with God’s plan.  Mary said ‘yes’, even though it could have placed her in great danger. In those days in Jewish culture, she might have been put to death.  Joseph her ‘shamed’ fiancé could have accused her of adultery, since at that time being betrothed was as legally binding as marriage is today.  If he had done so she would have been killed by stoning.

Mary would have known this and being so young and inexperienced, must have felt afraid; but still she said ‘yes’ to God.  It is in this acceptance of God’s will in her life that she becomes our true inspiration. She invites us to place our trust in Him.  We all have things that we fear and choices we have to make: Mary is our role model for living our lives in ways that ensure we place all of our hope and trust in God.

Mary lived her life on this earth in continued preparation and anticipation for her eternal destiny, secure in her identification as a beloved daughter of a loving Father.

Whether it is a Christmas card scene of Christ’s birth or Michelangelo’s famous Pieta, the image of Mary and her child is a very powerful one. Mary’s role in the history of Salvation is to be the means by which God breaks into human history in the person of Jesus.

It is to her he would have spoken his first words and in front of whom, he would have taken his first steps. We witness her anxiety when he goes missing in the Temple and can understand why she asks ‘My child, why have you done this to us?…’

How dreadful for her at Calvary as she stands at the foot of the cross supporting her tortured son in his last agony.   Almost all women, whether mothers or not, have the nurturing abilities and comforting qualities that make them ‘motherly’ to others, and so can relate to Mary as a nurturing, caring person.

There is relatively little about Mary in the New Testament, and what does appear is not unequivocally positive.  Mark’s portrait is actually quite negative: Mary does not understand Jesus’ ministry and even tries to interfere with it (3:20-35).

Matthew and Luke tone down the harshness of Mark, but John also reports that Mary’s faith was still imperfect during Jesus’ public ministry.  At Cana, Jesus disassociates himself from his mother because she does not realize that the work which the Father has given him, takes precedence over the claims and interests of his natural family.

Catholics place high emphasis on Mary’s role as Protector and Intercessor.  Jesus will do as she asks even if he does not want to, as at the Wedding Feast, when he changed the water into wine.

The prayer The Memorare has the lovely opening lines: ‘Remember, O most gracious Virgin Mary, that never was it known that anyone who fled to thy protection, implored thy help, or sought thy intercession was left unaided…’

How comforting are these words and I sense, implicit in them the idea that Mary understands, because she too has been where we are in life, with all its worries, troubles, trials and tribulations.

I will finish on a lighter note by recounting a little story which, I think, does a lot to reclaim Mary as someone we can identify with.

A man died and was at the gates of Heaven hoping to go in.  However, God saw him and told Peter that he was not to be admitted.  Sometime later God saw this very same man having a lovely time, united with all his friends and family.  He said to Peter “I thought I told you to put him out?”  To which Peter replied, “You did, but he want round to the back door and your mother let him in!”