This week we saw the beginning of what is referred to as the opening up of our country. Hand in hand with this is the notion of ‘the new normal’, a phrase which strikes fear in the hearts of some, intimating that things have changed irrevocably.
I am still getting used to the idea of the queue, and keep forgetting that I cannot just walk straight into the supermarket. When a friend says they have been shopping, it seems that the first question you ask them is if they had to wait a long time before they were allowed inside.

Now that the buses are only allowing a certain number of passengers onboard people are wondering about queue etiquette. Will commuters push up to the front in a bid to get a precious seat? As more businesses open the numbers traveling will increase, with everyone wanting to be into work on time. If a person is first in the queue they should not have to fight for their place on the bus.
Why is it that many seem to think that it is acceptable to push in ahead of the person who was there before them? I do not believe that this is the correct application of “…and the first shall be last”! It is, however, a good example of how we tend to put our own needs above the needs of others. Not the Christian perspective on the treatment of our sisters and brothers, but then whoever thought that Christianity as a blueprint for living would be easy? 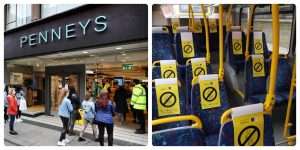 Many of us are confused by it all, should we wear masks, should we not? Some people say they cannot because they find it an obstacle to breathing easily. It seems to be more difficult if you wear glasses and there have been tips on the radio on how to avoid these steaming up. The Irish have a reputation for being social and convivial. Wearing facial blockage does not fit in with their natural tendency to enjoy the craic!
On a serious note it may become mandatory to wear masks; our friends across the water have been required to do so on public transport since last Monday, June 15. People now have to wear face coverings on buses, trains, tubes and other modes of public transport as non-essential shops begin to open again.
The chief medical officer for England, Professor Chris Whitty, has repeatedly stressed that face coverings are “not a substitute” for physical distancing. Nicola Sturgeon, Scotland’s first minister, has said that she is considering making the measure compulsory and it may be “inevitable” as anecdotal evidence suggests many Scots are disregarding guidelines. 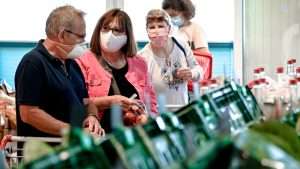 Like it or not we will have to live with new measures and accept that the world has changed in the space of three short (or interminably long!) months. How we relate to and communicate with others has been re-defined and what we used to do naturally, as in giving someone a hug, or handshake, now has to be circumvented.
There is a more worrying side to all this. I witnessed an altercation in a supermarket on Monday which I found disturbing. A woman was shouting at a man and accusing him of not observing proper social distancing in the queue. She also said he had been “up on top” of another woman ahead of her. I had not seen whether he had or had not, nor am I saying she had no right to challenge his behaviour.

However, two unpleasant aspects of this encounter came to mind when I was processing it afterward. It is sad to think that we now view people as potentially hazardous and therefore to be avoided and I also fear that those who thrive on aggression, and harbour a sullen hostility towards others, will take every opportunity to vent their hostility, whether justified or not. Sadly, none of this fits in with the Christian perspective of loving our neighbour or doing good to those who hurt us. 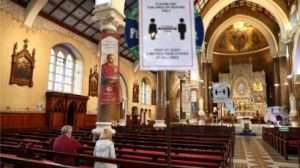 Do lend a Hand

Now that the Government has announced a quicker than expected return to public worship, the hierarchy has published a checklist for parishes to assist the faithful in their preparations to ensure that returning to Mass “happens in a safe and measured way”.
With the restrictions set to lift on June 29, the Irish Catholics Bishops’ Conference said that the preparations would only be a success if there is “generous support” from volunteers. This is a very important point because it highlights the necessity of a ‘hands-on’ approach, which is vital to ensure that churches are ready to provide safe spaces for Prayer and Worship. There is a lot of work to be undertaken and parishes are asked to set up Covid-19 Support Teams to manage the various aspects attendant on public worship e.g. Stewards and collections as well as Holy Water fonts, Music ministry, and missalettes.
Some are worried that people who now find it easier to listen to Mass online may never venture into a church again. It would be sad indeed if this were to become ‘new normal’. After all, it is not just about hearing Mass; it is also being connected to a visible community of women and men who are fellow pilgrims on our journey home to God.