The news from the Vatican this week was a reminder that we are living in a unique period of history because we have a reigning pope Francis, and a retired pope Benedict both alive at the same time.  Benedict was the first pontiff to resign in 600 years and still lives within the walls of the Vatican, in the Mater Ecclesia Monastery, which overlooks St Peter’s Basilica.

Nine days ago on June 18, he traveled to Bavaria, Germany to visit his ailing older brother, Msgr Georg Ratzinger.  No mean feat for a man of 93 years who is frail and bowed, speaks in a low whispering voice, and is confined to a wheelchair.  Of course, he traveled with an entourage of helpers, including his personal secretary, Georg Ganswein, a doctor, a carer, a nun, and a three-man security team.  For nearly every aspect of his life, Benedict must now rely on the help of others.

His brother is older and at the age of 96 is bedridden.  The two brothers have always been close and were ordained to the priesthood on the same day, June 29, 1951.  While his brother was pope and even after he stepped down from the papacy, Msgr Ratzinger would come to the Vatican to spend his Christmas and a summer holiday with Joseph. This trip by Benedict happened after Georg’s plans to visit Rome were halted due to Covid-19.  Sadly, he is now too unwell to travel.

In Regensburg, in addition to celebrating Mass with his older brother each day, and visiting him every morning and evening, Benedict also used his visit home as an opportunity to pray at the graveside of his mother, father, and sister Maria, who had run his household in Rome when he was a Cardinal.  She died in 1991. A spokesperson for the Regensburg diocese confirmed it as a spontaneous visit with a farewell character and that the pope emeritus was “exhausted” by the exertion of his trip. 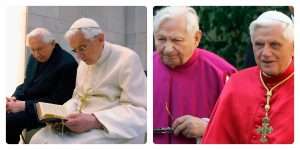 Seen in an Unfair Light

Benedict has, it is fair to say, been a controversial figure from the moment of his accession to the Papacy and indeed before.  His solid conservatism alienated many more liberal-minded thinkers in the Church.  Unfortunately, this view of him attached to itself an image of an austere, cold individual which was unfortunate and misleading.  Benedict is neither.

For his visit to Britain in 2010, he won widespread admiration for his humility and warmth, and for the intellectual vision, he showed when he addressed members of both Houses of Parliament in Westminster Central Hall.  He has been described as shy, approachable, and informal, rarely showing anger and treating intellectual opponents with courtesy and respect.

The owner of a Bavarian Restaurant near the Vatican where he was a regular, said he was a modest man with a dry sense of humour.  She tells the story of the time someone lost a dog and put up a notice which read, “Has anyone seen a German Shepherd?” The Cardinal came in and declared to the amusement of all “No, no it’s not me, I’m here!” 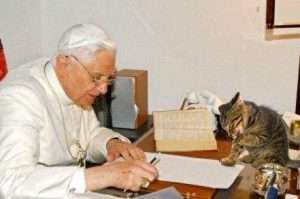 His kindness to the stray cats of Rome is already the stuff of Vatican legend.  He is also the only pope to have a cat as a biographer.  In a book for children, Joseph and Chico. The Life of Pope Benedict as told by a cat, Chico vividly describes the life of his ‘best friend’ the pope, recounting events in the life of Joseph Ratzinger, from the Nazi era onwards.

Chico is based on a real cat, a tabby, who lived in a house across the road in Pentling, in Germany, where Joseph Ratzinger lived for 20 years, before moving to Rome as Cardinal. Chico was devoted to his neighbour and recounts how he would run into the house each time the Cardinal returned and sit on his lap, while Joseph played his beloved Mozart on the piano.

The book, has an introduction by the Rev Georg Ganswein and is authorised by the Vatican. 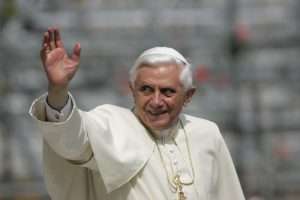 Benedict is a Conservative in the deepest sense of the word.  He believes that tradition reflects important truths and should be respected.  He is a highly regarded theologian, knowledgeable in the intricacies and fundamentals of his faith.  Ironically, he was originally liberal in his views and as such acted as an advisor to the Second Vatican Council.

However, that all changed, when in 1966 in the aftermath of Vatican II, he took up a new academic post at Tubingen University which was at that time the flagship of liberal theology in Germany.  So when student revolts against authority rocked the university he was a horrified first-hand witness.

Professor Ratzinger, as a German who had grown up in the 1930s, understood all too well what a totalitarian regime could do.  He saw a new left-wing totalitarianism at work in the revolutionary spirit of the 1960s.  He came to the conclusion that a return to traditional teaching was the only rational response.  His new conservatism earned him a top job in the Vatican.  In 1981 Pope John Paul appointed him Prefect of the Congregation of the Doctrine of the Faith where he cracked down on theologians who questioned orthodox teaching.

Our own Fr Brian D’Arcy was one of the clerics censured by Rome and has said that if Pope Benedict had not resigned when he did, he might have had to leave the ministry.

It is certain that Benedict will remain one of the most fascinating of popes for a long time to come.  Regensburg Bishop Rudolf Voderholzers who saw Benedict in all his frailty last week said it was clear the retired pope was himself “near his end.”

Whatever the view of history, even those most opposed to Benedict would concede that he was a humble man motivated by a desire to serve the Church