The main topic in the news this week and the only one to topple Covid-19, albeit temporarily, was the death of John Hume, the man without whom peace would never been attained in Northern Ireland.

Those of us who grew up in the 1960s and 1970s here in the south were used to the daily headlines regaling tales of terror on the streets of Belfast and Derry.  Just like the pandemic now, The North was the ongoing news story, deadly, depressing, and seeming never-ending.

I vividly recall the lurid images of women who had been tied up, tarred, and feathered for daring to go out with British soldiers.  As a child that probably affected me more than the daily written and television accounts of intimidation, violence, terror, killings, and pure hatred emanating from both sides of the sectarian divide. I am ashamed to say that it got to the point where one became fed up with it all and regarded it anyway as a lost cause. 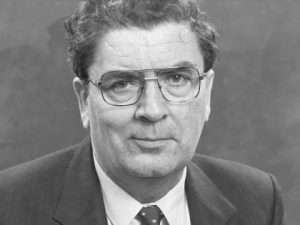 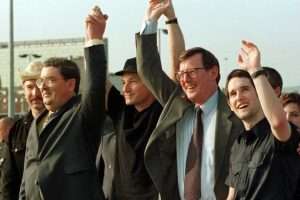 One person who never took such an attitude or abandoned hope was John Hume.  His belief was that the future did not have to be the same as the past, but that any change had to be made in a non-violent way; that was a path he stayed on until the end. From start to finish, his outstanding characteristic was his consistency.  That the Good Friday Agreement came twenty-six years, 3,500 deaths, countless devastated families and maimed bodies, after John Hume outlined his ambitions in the SDLP document Towards a New Ireland shows the extent of the challenge which faced the man who has been described as Ireland’s Martin Luther King.

John was born in Derry on January 18, 1937. The family were poor and Catholic, another disadvantage at that time and in that place.   In that city, in particular, Catholics lived in undeniably undesirable circumstances.  Housing conditions were dire and the only people who had the vote were those who paid local rates or taxes.  Catholics were less likely to be employed and so less likely to be ratepayers.  As a result of this fewer Catholics had a vote for local elections.  They were a majority in the city of Derry (or Londonderry depending on whether you were Nationalist or Unionist) and yet were politically impotent.

John grew up in the Bogside which came to represent a mindset of people who felt that they had been politically discriminated against by successive governments for years. The similarities to the plight of African Americans in America were many and it was no accident that the civil rights movement that emerged in 1968 was modeled on that of Martin Luther King.  Hume emerged as one of its leading members when the Derry Citizens’ Action Committee staged a number of marches, advocating strictly peaceful demonstrations.

His early involvement in the Credit Union Movement, and later his success in bringing thousands of jobs to Derry, was a testament to the fact that foremost in his mind was always the cause of social justice and fighting poverty. 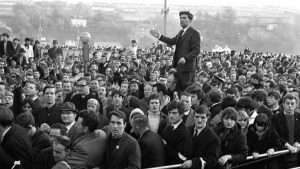 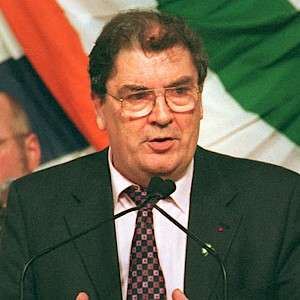 John’s political career began when he was elected in 1969, aged 32 as an independent nationalist MP at Stormont.  Only a year later he became a founding member of the SDLP, the aim of which was to be a strong political alternative to the Unionist party.  In 1979, Hume took over the leadership from Gerry Fitt.

Two years later the death of Bobby Sands and the other IRA hunger strikers in the Maze prison, focused world attention on the situation in the North.  It resulted in mobilization for the nationalist cause and enabled the political rise of Sinn Fein. Extremist republican hatred for the British Prime Minister would eventually lead to the Brighton Hotel bombing in 1984, where Mrs. Thatcher narrowly escaped death.

In the aftermath of this audacious attack on the leader and her government, British Military Intelligence informed Mrs. Thatcher that she could not defeat the IRA.  In January 1985 she invited John Hume to Chequers to discuss Northern Ireland. In May 1983, he had been the inspiration behind the New Ireland Forum, formed to bring together constitutional nationalist parties from both sides of the border.  Mrs. Thatcher realised, reluctantly, that there would have to be some input from the Irish government to contain the situation on the nationalist side.

The origin of the Anglo-Irish Agreement in 1985 lay in behind the scenes negotiations and its central feature was that the Irish and British governments would consult regularly and formally on the administration of Northern Ireland.  While Unionists felt outraged and betrayed it was this Agreement which enabled the Good Friday Agreement of 1998, a deal which created the Northern Ireland Assembly and new cross-border institution. 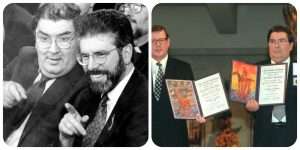 John Hume had been involved in secret talks between the British government and Sinn Féin, but it was his participation in secret talks with Gerry Adams, the then President of the party, in the late 1980s and early 1990s which was a key catalyst for the nascent peace process.

The SDLP leader faced intense criticism, including some from within his own party when his dialogue with Adams became public in 1993.  Despite threats to his life, he persisted with his efforts to engage with the republican movement and to convince the IRA to end its campaign of violence.

Eventually, in 1997 the IRA announced the renewal of its 1994 ceasefire.  Multi-party talks begin at which Hume and his party play a highly significant role.

The two highlights of his career came in 1998 when the Good Friday Agreement was signed (April) and both he and the Ulster Unionist party leader David (later Lord) Trimble were awarded the Nobel Peace Prize (October).  The Committee decided to make Hume a joint winner because he has been “…the clearest and most consistent of Northern Irish political leaders in his work for a peaceful solution.”

John Hume was described thus week as a political Colossus; it was only while writing this that I realised how true that is.  It would be almost impossible to recount all he did, as well as all the up-hill battles and set-backs he contended within his long career of work on behalf of Derry, Northern Ireland and the people that he loved so well.

Let us leave the last words to Pope Francis whom the Vatican quoted this week…  “Mindful of the Christian faith that inspired John Hume’s untiring efforts to promote dialogue, reconciliation, and peace among the people of Northern Ireland His Holiness commends his noble soul to the loving mercy of Almighty God”.