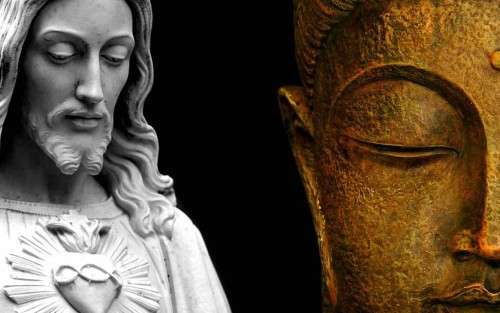 This Sunday sees the celebration of the birthday of Buddha according to the Gregorian calendar.  The only thing I knew about the Buddhist religion was their respect for all forms of life so I decided to compare it with Christianity and learn a bit more in the process!

Buddhism originated in North-East India sometime between the 6th and 4th centuries with the historical figure known as Buddha.  He was a prince who had been christened Siddhattha Gotama.  Unlike Jesus, a humble carpenter in Nazareth with his father Joseph, Siddhattha was a pampered Royal who was not allowed to leave the palace grounds.

One day when he became an adult he persuaded his charioteer, Chanda, to take him for a drive outside the palace.  What he saw was to change his life.  Firstly he saw an old wrinkled man, then a very sick person and worst of all a corpse.  These shocked him because he realised that we all get sick, we all grow old and we all have to die.  On his way home he saw his fourth sight – a man who looked happy.  He was wearing the saffron robes of a monk.  This man lived a simple life searching f or the meaning of existence.

These sights so disturbed Siddhattha that instead of applying himself to his princely duties, he continually thought about the problems and causes of suffering.  As a result, he spent many years doing various religious practices such as praying, meditating and fasting until he finally understood the basic truths of life.  This realisation occurred after sitting under a Poplar-fig tree in Bodh Gaya for many days in deep meditation.  He gained enlightenment, or nirvana, and was given the title of Buddha.  Enlightenment meant not only knowing the truth in his mind, but it was also knowing it at such a deep level that he became filled with great compassion for all beings.

The world is not enough

Unlike Christians, for Buddhists, the Buddha is not God or even a prophet, but a human being, albeit a very special one.  His life story is important because it recounts how the young man grappled with the truth of ‘how things really are’.  He realised his own potential and became enlightened.  His followers believe that all people have the potential to do this and Buddha is the supreme example.

Buddha taught that everything in life changes, for example, the people we love change or the job we enjoy doing changes.  This is called annica (impermanence).  Some critics of Buddhism believe that this focus on good things passing means that Buddhism is a negative religion.  However, defenders of Buddhism point out that all things and states are impermanent including bad things, like war, pain or sadness.

Nevertheless, this awareness of annica is a major cause of suffering.  The Buddhist word for this suffering is dukkha which is best translated as ‘unsatisfactory’ rather than ‘suffering’ because the word ‘suffering’ can make us think of things like death, tragedy, and illness.  Whilst these are real examples of human suffering, dukkha means much more.  Even happy times are the cause of suffering because they don’t last.  Think of the beauty of the colours of autumn; poets often describe autumn as a melancholy season because inevitably the leaves will fall and winter will follow.

Such potentially good things in life cause humans to suffer because of tanha (desire or craving).  In short, we suffer because we want things and we want good things to last.  We haven’t got the money or the looks so we suffer.  We want to hold on to youth and our lives, but we cannot, ergo we suffer.

All Buddhists strive to follow the Eightfold Path.  This is the middle way laid down by Buddha and it meant not leading a life of luxury and indulgence but also not one of too much fasting and hardship.  The path involves three aspects: wisdom, ethics and mental effort.  Buddhists are asked to be compassionate, to avoid lies and gossip, to live honestly without harming living things, (they cannot become butchers or fishermen), to be aware of what they are doing and to practice meditation.

The Five Precepts are the foundation of Buddhist ethics, a guide for living and a basis for forming positive attitudes of mind:

At first, it might seem obvious to compare the above with the Ten Commandments.   While there is a connection in terms of rules for living, the precepts, unlike the commandments, are not laid down by God.  They are, rather, a set of rules for living and training that are taken on voluntarily in order to become like Buddha.

It is sometimes said that Buddhism is a philosophy rather than a religion because some people believe that Buddha denied God’s existence.  In fact, he did not.  He taught that enlightenment and salvation came through one’s own efforts and that no one else, including a god can do this.  Buddha taught that being concerned about God and his existence was a distraction from the path of enlightenment.  It is probably true to say that what makes Buddhism a religion is that it stresses the need for human beings to transcend their imperfections.

Buddhism also differs from Christianity in a non-belief in the soul and doctrine of a kind of rebirth or reincarnation.

In Buddhism, we have an example of an inspiring human being and I was particularly struck by the care for the environment which comes naturally to the followers of Buddha, but which is so lacking in our world today.

As Christians, we have in Jesus not only an inspiring human being but also the son of God.  In this way, he completes all aspects of our nature and is the way to that transcendence which people continually strive for and which in Him is made perfect.   He is not only an example but also the means of our salvation and the answer to all the questions of our hungry hearts and restless souls.