Summer is here and many parents will be trying to find ways to entertain their children on holidays from school.  It may sound a trifle off-beat but why not consider taking them on a tour of our famous Dublin Cathedrals. They are treasures in their own right as well as testimonies to faith and sources of historical learning.

Most people in Ireland, nominally anyway, belong to the Roman Catholic faith and some visitors find it strange that our two Cathedrals. St Patrick’s and Christ Church actually belong to the Church of Ireland.  This dates back to the Reformation and the suppression of the Church of Rome.

But let’s start with St Mary’s Pro-Cathedral which is the seat of the Roman Catholic Archbishop of Dublin, currently Diarmuid Martin.  A pro-cathedral is a parish church that is temporarily serving as the Cathedral of the diocese.  Note the word temporarily – the Roman Catholic Church believes it has a prior claim to St Mary’s Pro-Cathedral going back long before the Reformation and has lived in expectation that it would “get it 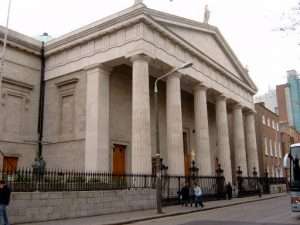 back” at some stage.

Under the Penal Laws, Catholics were not allowed to build churches on any main thoroughfare in Ireland.  This explains why it is located  ‘down a side-street’.  The Pro-Cathedral was originally the town house of Lord Annesley situated on the corner of Marlborough Street and Elephant Lane (now called Cathedral St) within sight of the city’s premier street Sackville St (now O’Connell St).

It was designed in a variety of styles.  The front portico is a copy of the Temple of Theseus in Athens, and the Doric columns rise without bases from the floor of the church.  Three statues adorn the top – Mary, Mother of God flanked by the two diocesan patrons, St Kevin and St Laurence O’Toole. The interior is more Roman in style than Grecian and closely resembles the Church of St Phillipe du Roule in Paris.

Few buildings have such a close association with significant moments in the political and religious history of Ireland as St Mary’s. It has been the scene of farewells to great Irish statesmen among them Arthur Griffith, Michael Collins, Eamon de Valera, Sean McBride and of course Daniel O’Connell.  After his funeral, the coffin lay for four days on a great catafalque and the whole church was draped in black.

This great church belongs to the people of Dublin in particular who know it affectionately as the ‘Pro’.

The Cathedrals of St Patrick and Christ Church are located in Dublin 8, within a half a mile of each other.  Both are imposing and magnificent structures and major visitors’ attractions.

To St Patrick’s first. With its 43 metre spire it is the tallest church in Ireland and one of the few buildings left from medieval Dublin.  Personally my favourite sight in the city at night time is this beautiful Cathedral lit up and in glorious repose in front of the lovely St Patrick’s Park.

The writer and clergyman Jonathon Swift was Dean of St Patrick’s from 1714-26.  During his tenure he wrote a number of pamphlets concerning Ireland’s economic and constitutional status as well as beginning work on his major opus Gulliver’s Travels.  He is buried in the south side of the cathedral beside Esther Johnson, the ‘Stella’ of his letters and journal.

Among the Cathedral’s other treasures are Celtic grave stones, medieval brasses and tiles, the medieval Chapter House door with a hole in it, dating from 1492 which gave us the phrase ‘chancing your arm’.  The Earl of Kildare cut the hole and stretched out his arm to grasp the hand of his enemy the Earl of Ormonde, who had taken refuge in the Chapter House.  By taking the initiative, reconciliation was achieved.  In the choir are the banners and stalls of the Knights of St Patrick (1783) and in the transepts the old Irish regimental banners and monuments.  Memorials to famous Irishmen abound in the cathedral, including Turlough Carolan, last of the Irish Bards, John Philpot Curran, composers Michael William Balfe and Charles Villiers Stanford, as well as Irish presidents Douglas Hyde and Erskine Childers.

The Choir School, founded in 1432, educates boys and girls for the choir, who together with the Lay Vicars Choral, sing two liturgical offices every day in the cathedral.   The massive West Tower which houses the cathedral bells was built by Archbishop Minot in 1370 and the first public clock in Dublin was placed here in 1560.

St Patrick’s is the National Cathedral for the Church of Ireland, covering the two separate jurisdictions of the island of Ireland.

Despite my preference for St Patrick’s it is probably true to say that Christ Church Cathedral is the jewel in the crown of Dublin’s treasured landmarks.  This is Dublin’s oldest building renowned for its beauty, architecture and exquisite floor tiles.  It is home to the famous 12th Century crypt, one of the oldest and largest in Britain and Ireland.  The crypt houses priceless silver, the cathedral shop and Ireland’s first copy of the Magna Carta.

It can also be hired for events.  I was at a table quiz there myself earlier on this year and some time ago I remember attending a wonderfully atmospheric production of Eliot’s Murder in the Cathedral. Years ago I had the pleasure of attending a bell-ringing event which was fascinating.  From the bell ringing room the workings of the tower clock can also be seen.

The most unusual and popular inhabitants of the crypt are ‘the cat and the rat’.  The one, presumably chasing the other became trapped in an organ pipe in the 1850s and were mummified.  Known locally as ‘Tom and Jerry’ they are referred to in James Joyce’s Finnegan’s Wake where someone is described as being…

”As stuck as that cat and that mouse in that tube of that Christchurch organ.”

Henry II attended the Christmas service at the Cathedral in 1171.  According to the Cathedral guidebooks this was the first time Henry received Holy Communion following the murder of Thomas Becket by his knights in Canterbury.

At the west end of the cathedral is a fully integrated stone bridge, leading to the former Synod Hall, now home to the Dublinia exhibition about medieval Dublin.

Writing this has made me decide to revisit these lovely buildings once again.  I feel sure I shall discover something new!