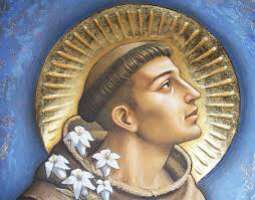 Yesterday, June 13th marked the feast day of one of the best loved saints in the Roman Catholic Church, Saint Anthony of Padua. He is often invoked by the faithful to help them find lost or missing items.  A little jingle goes like this:

“St Anthony, please look around; something is lost and something must be found.”

This is because when he was a teacher in the Franciscan Order a novice who was leaving religious life decided, for good measure, to take with him an important book containing all the notes and comments Anthony used for teaching his students.  It was a book very dear to Anthony and much valued by him. When he discovered it was gone, he prayed it would be found or brought back to him.  The thief not only returned the book but also returned to the Order as well.  The stolen book is said to be preserved in the Franciscan friary in Bologna today.

Anthony was born in Lisbon, Portugal, in 1195.  His parents were members of the Portuguese nobility; his father was a knight at the court of King Alfonso II.  Anthony was just a child when he decided to devote his life to serving God and at age fifteen he became an Augustinian brother. He studied very hard and being gifted with a powerful memory attained an excellent knowledge of theology, sacred Scripture and the Church fathers.

In 1220, the five bodies of the first Franciscan Martyrs, who were killed in Morocco at the hands of the Muslims, were returned to Portugal.  This had a tremendous effect on Anthony who was so moved by their witness of faith that he decided he too wanted to preach to the Muslims and even give his own life for the Lord.  To pursue this desire, he left the Augustinians and joined the Franciscans.  Soon after he set sail for Morocco but everything changed when a serious illness necessitated his return to Lisbon.  However on the return journey a violent storm drove his ship off course to the shores of Italy, where he would live for the rest of his life.

On May 30, 1221 a general chapter (meeting of representatives) of the Franciscans was to take place in Assisi, so Anthony travelled there to take part and to meet St Francis. In a letter to Anthony in1224, Francis granted him permission to teach theology to the friars.  Anthony took this very seriously while still making time for his contemplative life.  Both Francis and Anthony had a great love of deep prayer and contemplation and they would often steal away from the midst of their busy lives to take time to pray and keep on the spiritual path.

However, Anthony was also a gifted preacher who drew large crowds wherever he went.  His greatest success was in Padua where the entire city flocked to hear his word and welcomed him as another St Francis.  Like Francis, he had a special reverence for God’s work in nature.  He was once seen standing on a river bank preaching to a school of fish, who appeared to be listening in rapture.

Like St Francis, Anthony received a vision of the Infant Jesus. French writers maintain that it happened at the Castle of Chateauneuf-la-Foret near Limoges, and Italian writers maintain that it happened at Camposanpiero near Padua. In both accounts, Anthony was reading his Bible late into the night when the baby appeared, literally “the word of God,” and stroked Anthony’s face showing by this gentle gesture his love for the man who had so competently preached about him.    It’s this intimate encounter that painters and sculptors most often represent.  So you will see St Anthony holding a lily, with a child in his arms, and often too a bible.

The white lily is one of Christianity’s oldest floral emblems but is associated in particular with Anthony.  Somewhere in Austria, in June 13, 1680, a fresh lily was placed in the hands of St Anthony’s statue and for an entire year the flower remained as fresh and white as it was on the day it was put there.   The next year the same stem bore two lilies, which filled the whole church with their fragrance.  This fact was authenticated officially, and was looked upon as a heavenly testimony to the purity of the Saint.

Several miracles are attributed to St Anthony during his lifetime.  One miracle occurred when he was preaching on Holy Thursday evening in the Church of St Pierre du Queriox in Limoges, France.  He suddenly remembered that he had to sing a lesson in the Divine Office back at his monastery.  He appeared simultaneously preaching in the church and singing the lesson at the monastery.  On another occasion when he was preaching outdoors in a thunderstorm, not one person listening to him was touched by a drop of water. These and other miracles during and after St Anthony’s death merited him the name, “Miracle Worker.”

This beloved saint died on June 13, 1231 at the age of 36.  When they heard of his death the children of Padua ran through the streets crying.

Pope Pius XII declared St Anthony a Doctor of the Church on January 16, 1946.  His apostolic letter began as follows:  “Exult, happy Portugal, rejoice, Happy Padua; for you have given birth for earth and heaven to a shining star, a man who has illuminated and still dazzles with a radiant light the whole earth, not only by holiness of life and fame of miracles, but by the splendour of his celestial teaching.”