This week we celebrated the feast of St Oliver Plunkett, who when canonized in 1975, became the first Irish saint for almost 700 years, as well as the first of the Irish martyrs to be beatified.  It was an honour that he had paid for dearly – with a life on the run filled with danger and discomfort, strong civil resistance to anti-Catholic hysteria, and a truly terrible martyrdom.

He is the Irish Church’s most celebrated martyr and the name most readily associated with the period of religious persecution in Ireland initiated by Oliver Cromwell, who ruled England as Lord Protector (1653-1658), in the interval between the reigns Of Charles I and Charles II.  Cromwell was passionately opposed to the Catholic Church, which he saw as denying the primacy of the Bible in favour of papal and clerical control.

In particular, he hated the Irish because of their loyalty to Rome and for a massacre of English Protestants in 1641.  When he landed at Ringsend on 15 August 1649 the civil war in England was over and King Charles had been executed seven months earlier.  In Ireland, however, the Roman Catholics had been in revolt since 1641 and had generally taken the King’s side, although some had seen in England’s turmoil a chance to restore Irish independence.

Cromwell was in Ireland until May 26, 1650.  In that short time, he accomplished a more complete control of Ireland than had been achieved under any English monarch.  His contempt for the Catholic clergy meant that he permitted them to be slaughtered.  His legacy was enacted in callous anti-Catholic legislation that ultimately culminated in Plunkett’s shameless execution.

Anti-Catholicism in England had its roots in the fear that a Catholic would attempt to seize the throne and overthrow the Protestant religion.  In 1570, Pope Pius V sought to oppose Queen Elizabeth I with the papal bull Regnans in Excelsis, which declared her a heretic and released her subjects from any allegiance to her.  Henceforward your loyalty to the state was defined by your religious persuasion.  England became consumed with paranoia over the threat to its existence from Catholic Europe, a threat which was rooted in the papacy.

In 1604, King James I publicly announced his ‘utter detestation’ of Catholicism; within days all priests and Jesuits had been expelled and fines imposed on those who refused to attend Anglican services.  The persecution of Catholics during this time led to the Gunpowder Plot, which generations of historians accepted was an attempt to re-establish the Catholic religion. Others more recently, have surmised that the plot was the work of a group hired to discredit the Jesuits and reinforce the ascendancy of the Protestant religion. 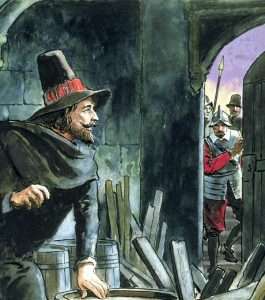 Most unfortunate Catholics accepted the inevitable, but some decided to take action against their oppressors. In 1605 Guy Fawkes and his co-conspirators attempted to blow up Parliament and the King. The so-called Gunpowder Plot became the defining story of Catholic violence. Even before the executions of those involved, prayers were being offered in every church in thanksgiving for deliverance from this ’Papist Powder Plot’

As a result, Catholics suffered even more. New laws were passed preventing them from practicing law, serving as officers in the Army or Navy, or voting in elections. Furthermore, as a community, they would be scapegoated for the rest of the century. The Popish Plot of 1678 was supposed to be an attempt by English and Irish Catholics, with the blessing of the pope and the help of France, to replace Charles II with his Catholic brother James, the Duke of York. In fact, the story was invented by an Englishman, Titus Oates, to discredit the Duke.  His lies were widely believed.  People rushed to burn effigies of the pope on bonfires.  Innocent people suffered torture and execution.  One such was Oliver Plunkett, Catholic Archbishop of Armagh who was executed at Tyburn in 1681. 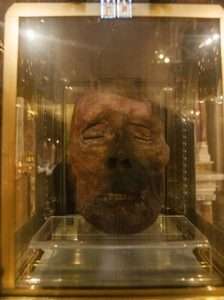 The ‘crime’ of being a Catholic Bishop

Plunkett had been educated and ordained in Rome serving there as a professor at the College of Propaganda Fide and as the representative of the Irish bishops at the Holy See.  Appointed as Archbishop of Armagh and Primate of all Ireland in 1669, he arrived the following year at a time when after prolonged repression the Catholic Church was greatly disorganized with only one aged bishop at liberty.  Setting himself to restore order and disorder in accordance with the precepts of the Council of Trent Plunkett kept on good terms with the English and Protestants, until 1673 when under renewed persecution many priests were arrested and deported to Europe.

Archbishop Plunkett had to fly from his home in a snow-storm and hide out in the mountains for six months.  A period of quiet followed which was broken by the ‘Popish plot’.

The English Government continuously issued writs for Oliver Plunkett’s arrest until he was finally captured in 1679.  He was found guilty of high treason for “promoting” the Roman Faith” and sentenced to death.  As was customary for those accused of high treason, he was brutally hanged, drawn and quartered on July 1, 1681.

Initially, his body parts were buried in two tin boxes in the courtyard of St Giles-in-the-Fields Church.  Nowadays they lie in Downside Abbey, Somerset.  After a brief stint in Rome, in 1684 his head was brought to the Benedictine monastery of Lambspring, Germany.  Since 1929 it has rested in an ornate golden shrine in St Peter’s Church, Drogheda.

The barbaric violence of his death did not distort his face.  The only evidence of shock is that the upper teeth are locked rigidly over the lower ones.

In ironic contrast is the fate that befell the remains of Oliver Cromwell.  Nearly two years after his death, on Jan 30, 1661, the twelfth anniversary of the execution of Charles II, Cromwell’s body was exhumed by supporters of the monarch from its resting place in Westminster Abbey and beheaded.  His head was displayed atop a pole outside Westminster Hall (the place of St Oliver Plunkett’s trial) for more than twenty years.