On Tuesday, July 15 we celebrated St Swithun’s Day.  He was even mentioned on the RTE news, not an accolade afforded to too many saints in these times of religious indifference!  However, this saint may be an exception because of his association with a topic close to the hearts of us Irish, namely the weather.

Always a reliable subject of conversation, observations such as:

‘There is great drying out’,

‘The darker evenings are closing in’,

‘There is a grand stretch in the evenings’,

are exchanges familiar to us all.  We constantly wonder if it will rain and what might be the effect on the farmers if it does not?  It seems we are rarely, if ever, happy.  Certainly, so far this month we have little cause to be!  As I am writing this it is chilly and the drizzle of rain outside my window seems never-ending.

But back to Swithun…who was he?   Why is it guaranteed that we will hear his name mentioned on one day every year? 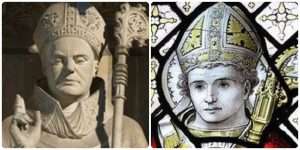 A Man of Merit

Swithun was born in Wessex and educated at the Old Abbey at Winchester, the first ancient capital of England.  He was chosen by Egbert, who was king of Wessex (and the first Saxon king recognized as sovereign of all England) to be his chaplain. He was also entrusted with the education of the royal prince, Ethelwulf. Furthermore, it has been suggested that he was tutor to Ethelwulf’s son, and Winchester’s most famous son, Alfred the Great, which would fit chronologically at least since Alfred was born in 849.

When Ethelwulf succeeded to the throne, Swithun was one of his most trusted advisors and he named him bishop of Winchester in 852, launching the diocese into one of its most splendid eras. During his ten years’ episcopate, Wessex consolidated its position as the most important kingdom of England and faced the first ominous, albeit sporadic, attacks by Vikings in the south of England.

Swithun was famous for his church building, and his aid to the poor as well as wielding considerable influence for moderation, charity and justice throughout Wessex. When he died in 863, he was buried in front of the west door of the Saxon Old Minster. This was to be his place of rest for over a hundred years. 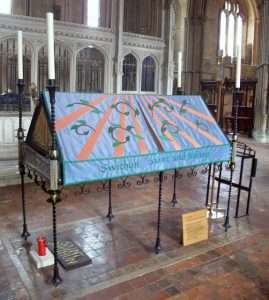 When Ethelwold, the reforming Bishop of Winchester, set up a new community of monks, he had Bishop Swithun’s bones dug up and placed in a precious reliquary in Winchester Cathedral. The occasion was marked by many cures claimed as miraculous, which accounted for Swithin’s high reputation as a healer.

However, before he died, Swithun had requested to be buried outside “Where the sweet rain of heaven may fall upon my grave”. On the day of the transfer, there was an unprecedented storm that lasted 40 days.  This was deemed to be a sign of the bishop’s displeasure in the afterlife because his wishes had been violated.  This story became part of folklore and now British people (who are as obsessed with the weather as ourselves!), keep an eye on the weather on July 15.  This is where the famous proverb has its origins:

St Swithun’s day if thou do rain,

For 40 days it will remain,

St Swithun’s day if thou be fair, 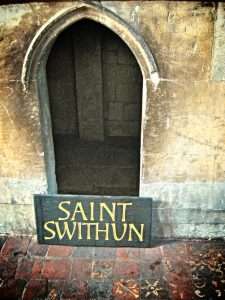 A Place of Pilgrimage

His tomb was to become a major site for pilgrims, many seeking to be healed from illness.  In 1476, a new even more imposing one was set up at another corner of the building.  A short tunnel, known as the Holy Hole, enabled anyone who was able, to crawl right under the shrine, as close as possible to his miraculous healing powers.    Grateful visitors were in the habit of leaving gifts of silver, gold and jewels. There was a belief that he was a miracle worker when alive and it is said that at one time he came to the aid of a poor woman who had dropped her basket of eggs.  St Swithun restored the splatters to whole eggs again.

Sadly, like so much else the cult and his shrine came to an end during the Reformation, when King Henry VIII seized control of the Catholic Church and declared himself head of the Church of England.  On September 21, 1538, under cover of darkness at 3 am in the morning, the king’s commissioners smashed it apart, and stole all the valuables.  Three years later, a workman stopped up the Holy Hole.

Today a modern memorial marks the spot and is well worth a visit.  The Cathedral is the starting point of the 34 miles long St Swithun’s Way, a long-distance footpath which was opened in 2002 to commemorate the Golden Jubilee of Queen Elizabeth II.