I am not the only Irish person who has fond memories of The Moving Crib in Parnell Square, a much loved and popular Dublin attraction for over sixty years. It was a family tradition that we went every year, as part of a ‘special’ day out and as children we loved it. In fact it meant that Christmas was really beginning at last.

Nostalgic Return to The Moving Crib

Just recently I made a return visit to Parnell Square with my young daughter, Shannon. For me the feeling was the same but the experience was different, simply because so much more has been added. The first new display is the first thing you see…a lovely olde worlde snow scene with a railway and enchanting illuminated houses. I am fascinated by railways but my daughter was more interested in Santa who kept popping up and out of a big chimney in the background. We had to stay and see that a few times!

The first scene of the Old Testament is Adam and Eve in the Garden of Eden complete with lovely trees from which hang shiny apples,plus a very realistic looking snake. The animals of Noah’s Ark are an absolute joy, cheeky and funny. Shannon was very taken with the giraffes holding up the washing line and the little goat holding the ‘All Aboard’ sign. She absolutely loved the lions in Daniel’s Den. Their eyes are amazing really hypnotic and their bodies have a most lion-like appearance. She was persuaded away eventually to draw her leaf for the tree in the Garden of Eden. While there, in that area of the Crib, be sure to check out the other Noah’s Ark display of carvings made in Ireland around 1850, it’s amazing and the detail and thought that went it to it is something else. 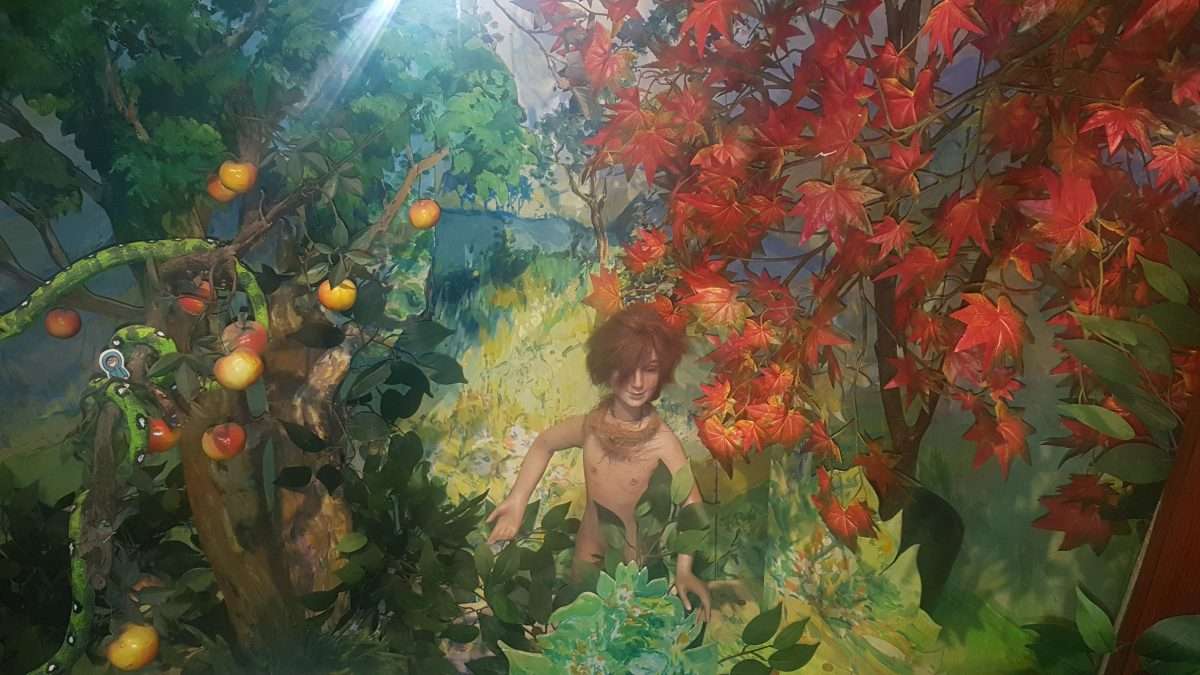 The New Testament Tableaux begins with the Annunciation and a lovely kitchen scene. Mary is shown in the middle of the pots and pans transfixed by the Heavenly Angel Gabriel, who is very effectively bathed in white light.
The hive of activity that is the crowded street scene in Bethlehem, is another source of fascination with all the people singing and dancing. Shannon was delighted with the hen laying her egg!

One of the things that struck me as we walked around (accompanied by lovely music ranging from the’ Halleluiah Chorus’ to ‘Ding Dong Merrily on High’) was how really lifelike the animals are. I am thinking of the Wise Men’s’ gorgeous camels and the sheep, especially the Shepherds’ little black one with his gaze fixed on the Angel. My daughter spotted him again in the Manger between St Joseph and the Little Donkey. Also impressive are the details of the clothes eg. the sumptuously attired dancers and courtiers in King Herod’s Palace. There is so much to catch the eye in this scene alone. 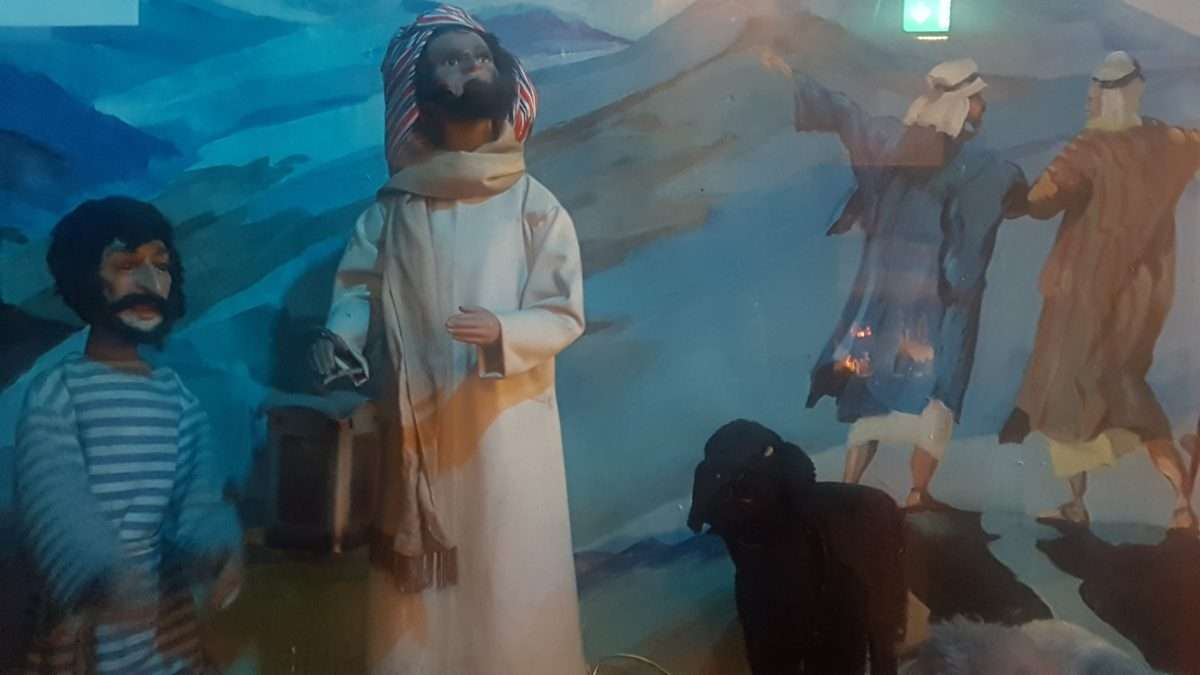 The same can be said for the Dolls’ House which is another lovely exhibit on display. This has ten rooms filled with enthralling furniture, fixtures, animals and dolls. The three sitting rooms between them have such items as a piano, candelabra, writing desk, phones, a ship in a bottle, books, china, cutlery tray, cake stand and a Christmas tree complete with tiny presents underneath its branches. Watch out for the kitchen cats lapping up the milk from the upturned bucket. In the Nursery you will see the baby, looking very bonny, the Nurse, pram and Rocking Horse. There are plenty of cats and dogs playing around the house, not to mention the parrot and its smallest inhabitant, a tiny goldfish in a bowl. 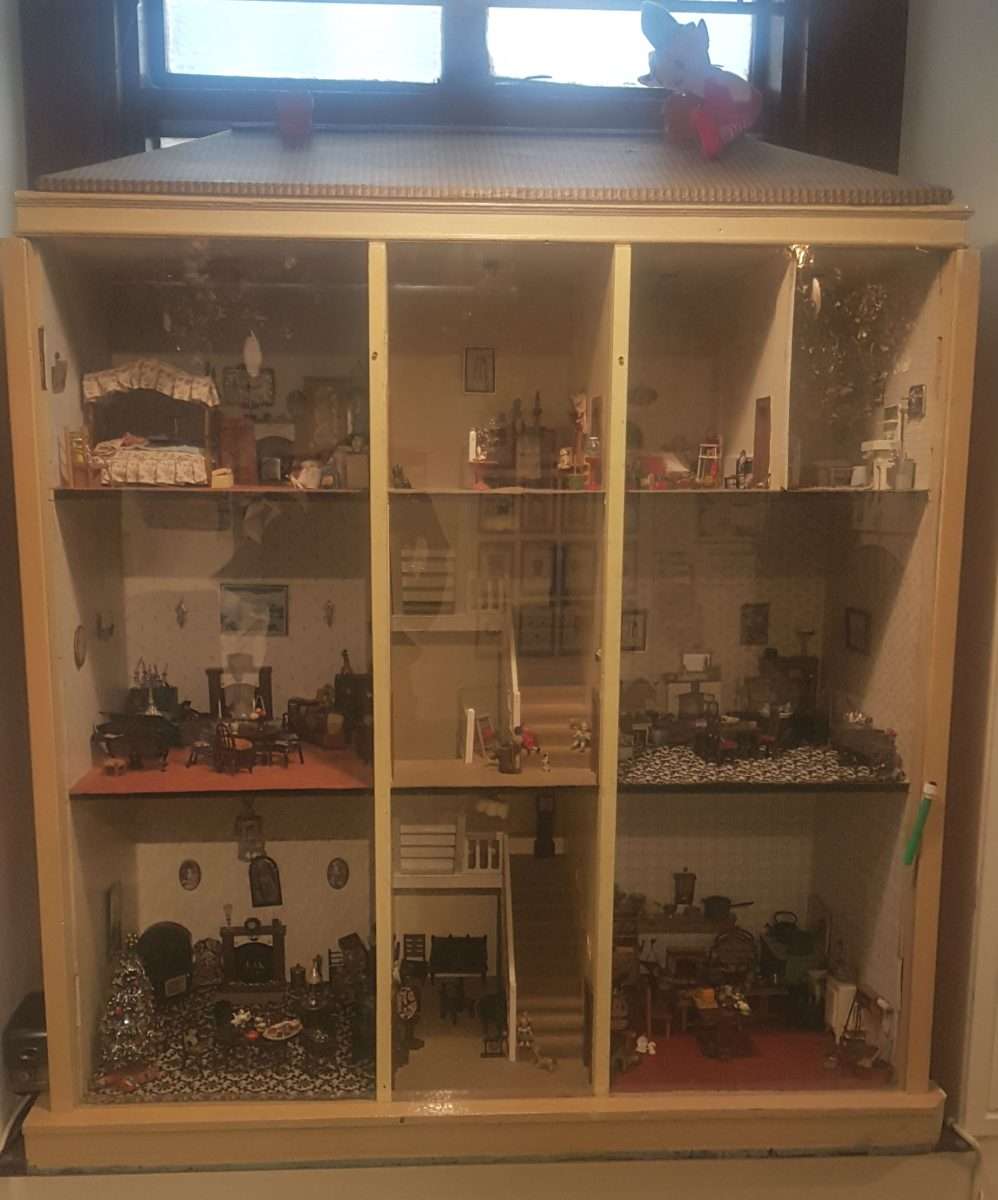 I would highly recommend a visit to the Moving Crib as part of your preparations for Christmas. It has advanced with the changing times while still bearing witness to the Christmas story. It was lovely to see the smiles on my daughter’s face, while knowing at the same time that she was learning about the true meaning of Christmas, the birth of Jesus our Saviour.

Categories: Blog, General
Tags: Dublin At Christmas, Dublin Events, Family Days Out, Free Christmas Events, Free Things To Do, Places to Visit in Dublin, The Moving Crib, Unusual Things to Do
Leave a Reply Cancel reply
This website uses cookies to improve your experience. We'll assume you're ok with this, but you can opt-out if you wish.Accept Read More
Privacy & Cookies Policy