This week I went to see the film The Two Popes showing at the IFI in Eustace Street.  The stars are Anthony Hopkins as Pope Benedict and Jonathon Pryce taking the part of Pope Francis, when he was Cardinal Jorge Bergoglio. The occasion is a series of secret meetings which took place between the two men in 2012.

The director, Fernando Meirelles, dramatizes the possible content of these encounters in a series of speculative exchanges between them.  The performances by the two actors are outstanding, and the depth they bring to their portrayal of the protagonists is spell-binding. 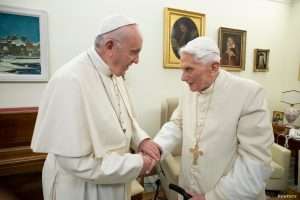 A time of two popes

We are living in a unique time because we have a reigning pope living in a suite in the Vatican guesthouse, Domus Sanctae Marthae and a retired pope residing in the Mater Ecclesiae Monastery, which overlooks St Peter’s Basilica.   Popes usually die in office but on February 28, 2013 Pope Benedict resigned on grounds of ill-health and declining old-age.

The election of both popes frames the film: in the beginning, Pope Benedict XVI; at the end, Pope Francis I. These are two very different men, not only in personality, but also with regard to their theological thinking.  What might have been an inevitable clash of opposites, becomes instead a beautifully paced realization of mutual respect, allied with a developing genuine warmth, which transforms their screen presence and is both up-lifting and touchingly humorous.

This is referenced in their first encounter in a washroom when the cardinal from Argentina is humming Abba’s ‘Dancing Queen’ to the total bemusement of the cardinal from Germany.  They are there in the Vatican to elect the successor to Pope John Paul II and the means of the election is very well recreated, almost suspenseful, even though we know of course the winner will be Joseph Ratzinger.

The new pope would like to see the Church resume her conservative ways and is faced with the liberal perspectives of Cardinal Bergoglio when he requests permission to retire in 2012.  The differences between them can be shown in their view of God.  The pope claims, “[He] never changes; the cardinal says “He does because He is moving towards us all the time.”

“I disagree with everything you say” snaps Benedict, at one point.  Bergoglio wants to break down walls; Benedict replies that it is walls that a house needs.

In a lighter moment, after Francis becomes friendly with the gardener, the latter gives him some of the Pope’s oregano.  Benedict wonders what he does to make himself so popular.  Francis replies “I just be myself”.  The pope somewhat poignantly observes that when he is himself no one likes him!

Jorge says that if he were pope, unlike Benedict he would not eat alone and more tellingly, he would sort out the Bank. 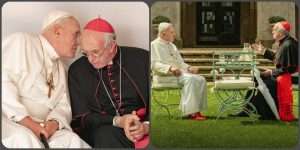 Shadows of the Past

It is interesting that what both Benedict and Jorge do have in common is a troubled past and such a situation invites both criticism and speculation.  At one point a customer in a bar refers derisively to the new pope as a Nazi.  This is an allusion to his time in the Hitler Youth when he was a teenager in Bavaria.  Following his 14th birthday in 1941 the young Joseph Ratzinger was conscripted into this group, as membership was required by law for all boys of this age after March 1939.  According to his brother, the future pope hated the meetings and skipped them when he could.

Francis was the head of the Jesuit order in Argentina when a military junta took power and terrorized from 1976 – 1983. Some of the events from this time in his life are dramatized in the film by the use of black and white flashbacks.  There have been different accounts of the future pope’s involvement in some of these, although the film is largely sympathetic to his position.  During this murderous era it was highly dangerous to openly confront the ruling power.

Accusations that he denounced two priests to the government have been denied by one of the survivors, and many have declared that in fact Cardinal Bergoglio did very much to protect people.  These scenes do however go a long way to explain Bergoglio’s hesitancy to commit to the papacy. 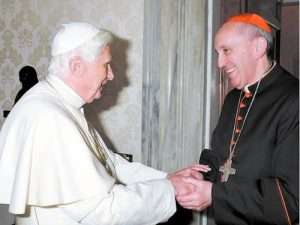 There are of course also lighter moments and they are truly a delight. We see Benedict sharing his enthusiasm for his favourite Austrian TV Show about a crime-stopping dog.  We learn that Jorge does Tango dancing once a week and is passionate about football.  The scene at the end, as the credits roll, show the two together, watching their respective countries play in the World Cup Final with Germany the winner.

In other scenes they share pizza and fanta and Jorge attempts to teach the pope the Tango just as he is taking his leave.  After this, in a very funny aside Benedict tells the chauffeur not to bring him back!

It has been said that Jonathon Pryce’s performance is worthy of an Oscar nomination.  Let’s hope so.  However I have to give the last word to Anthony Hopkins who demonstrates that there is much more to the former pope, than a reputation for being aloof, dogmatic and stilted.

There are very serious issues which are only touched on, but we know what they are.  Had they been emphasized too much, it would have been to the detriment of the relationship between the popes, and the inherent redemption therein.