On Thursday of this week, we celebrated the feast day of St Pope John Paul II. This man was the first Polish pope and his election brought great joy to his countrymen and women.

When future historians look back on the most influential personalities of the twentieth century his name will unquestionably loom large in their accounts. Few individuals have had a greater impact-not just religiously but socially and morally-on the modern world. He will stand as the most influential moral voice of our time.

However, there is an incident in his life that would have set him apart anyhow, and yet it is not known to a lot of people. Perhaps all the later events of his papacy overshadowed it somehow, but it is an example of the kind of man he was and an excellent illustration of humanity in a time when it was most needed. 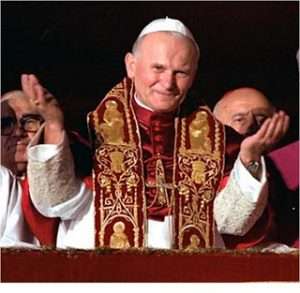 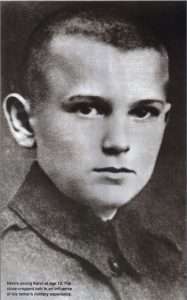 The future pope was born Karol Wojtyla on May 18, 1920, in Wadowice, Poland.  The town had a population of 6,000 Catholics and 1,500 Jews among them burghers, farmers, professionals, and merchants.  The name Karol is the equivalent of Charles in English and the family took to calling the boy by the diminutive Lolus – equivalent to Charlie.  This evolved into Lolek and followed young Karol out onto the streets of Wadowice and off to school.

Lolek had many friends and few enemies.  Though anti-Semitism was on the rise in Poland in the 1920s and 30s, Lolek’s circle included both Christians and Jews.  One of his neighbours Ginka Beer, whose parents sent her to Palestine in the late 1930s in order to escape Polish anti-Semitism, said “There was only one family [Lolek’s] that never showed any racial hostility towards us…”

Lolek would offer to play on Jewish football teams if they were in need of players.  He even accepted invitations to the town synagogue, where he heard music very different from that of his hymnal.

Days such as these were numbered as Hitler turned his eyes towards Poland with the intention of building it up as a colonial homeland for Germans.

Adolf Hitler viewed the world as an arena for the paramount struggle between people.  He divided its population into high and low races.  The Germans belonged, of course, to the high peoples and the Jews to the low ones.  The influence of Judaism (upon whom he blamed all the world’s woes) would never disappear without removing its cause, the Jew, from ‘or midst’. Thus was the fate of thousands of innocent people sealed, many of them the young boys who had played with Lolek.

In the process of destroying his beloved country, the Nazis situated their major killing centers there, organizing a railway that took Jews and other prisoners from their homelands to be murdered in occupied Poland.

There is little question that John Paul II’s commitment to combat anti-Semitism stemmed from his personal experience of the Holocaust.  He saw the face of evil perpetrated by the Nazis on a daily basis.  As a young man in Poland under this evil regime he witnessed hell on earth From Wadowice it is an hour’s drive to Auschwitz, and most of Wadowice’s Jews died there. Only 80 of them survived the war. 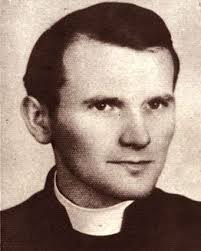 Because of the Nazi presence, it was not easy for Karol to pursue his vocation to the priesthood.  Hitler may have been a Catholic on paper but when religion was tied to a country’s sense of self as strongly as Catholicism was tied to Poland, then religion had to go.

Publicly Karol met the German demand for labourers by working in a stone quarry and a chemical plant. Privately, he enrolled in a clandestine seminary at Krakow run secretly by Cardinal Adam Stefan Sapieha, the archbishop of Krakow.

It was during his time as a seminarian that he performed an act of kindness which saved the life of a young Polish Jewess, a victim of the cruel tyranny of the Nazis.

Edith Zierer was born in 1930 in the city of Katowice, Poland.  After the war broke out her entire family was sent to the concentration camp in Plaszow.  There they were separated.  Edith was assigned to work in an ammunition factory.  The hard work wore her down.  She was starving and the Germans’ demands were growing.

When the camp was eventually liberated in 1945 by the Russians, Edith set out to find her loved ones. However, although she did not know it yet she was completely alone.  Her parents had died in Dachau and her sister, Judit’kah, had been killed in Auschwitz.

After she left the camp she got into a train car carrying coal and arrived at a station in Jedrzejow, dressed only in a striped labour camp uniform.  Cold, hungry and exhausted she huddled in a corner of the station. Only one man approached to offer help. It was Karol Wojtyla.  Dressed in his long robes of a Catholic seminarian, she mistook him for a priest.  When he asked her name, Edith’s eyes filled with tears.  It had been a long time since she had had any identity except as a number.  He left her briefly but returned with hot tea and a cheese sandwich. She later wrote, “I was thin, gaunt, tired and ill.  To this day I remember the first bite.”

He offered to help her get to Krakow but when she tried to stand she was too weak.  Karol placed his arms around her and carried her for three kilometers to the station from where the train to Krakow was leaving.  When they arrived he put her into a car and wrapped her in his cloak.   Before they parted Edith asked his name and kept it in her heart. 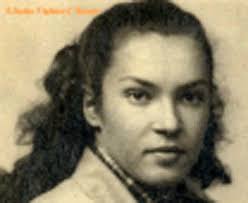 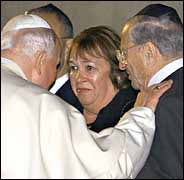 In 1978 when Edith heard that Wojtyla had become pope, she was so overcome with joy that she cried out in happiness.  At that time she was living in Israel, having left Poland in 1951.  She had her own family and worked as a dental technician.  She wrote to John Paul II, saying that she was the young girl he had saved at the train station decades ago.

After this, she was invited to the Vatican in 1998.  They were to meet again in a moving encounter on 23 March 2000 at the Yad Vashem Holocaust Memorial in Jerusalem where Edith was presented to the pope along with other survivors of the Shoah.

“I would not have survived had it not been for him.”

For… “Whoever saves one life, it is as if he had saved an entire universe.”