February 1st was originally a pagan festival marking the beginning of the new Season. It was known as Imbolc, which referred to the coming birth of the spring lambs, and 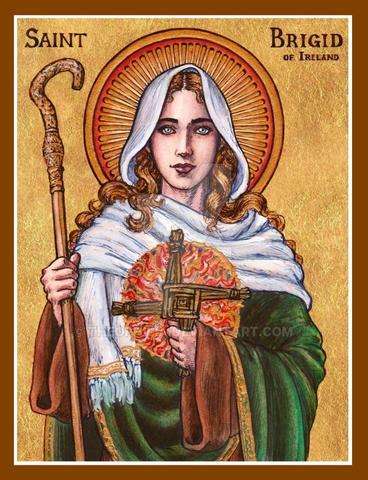 observed in Gaelic Ireland during the Middle Ages. Now we celebrate it as the feast day of St Brigid who has been called the Pearl of Ireland and forms the trinity of the country’s Patron Saints along with St Patrick and St Columcille.

Brigid shares her name with a Celtic Goddess about whom many legends and folk customs are associated. The saintly woman was most likely confused-somewhat deliberately-with the Pagan goddess. This is understandable when you consider that for thousands of years before the coming of Christianity our ancestors held dearly their deities and traditions. What is more natural than that some of the features of the Goddess would be transferred to her Christian counterpart?
According to tradition, Brigid was born in 450 AD, in Dundalk. Three biographers agree that her mother was Brocca, a Christian Pict slave who had been baptized by Saint Patrick and her father was Dubhthach, a chieftain of Leinster. Sadly before she was born her father had sold her mother into bondage. Patrick himself wrote “But they who live in bondage suffer most. They constantly endure even unto terror and menaces…” Brocca was sold on by Dubhthach at the request of his wife after he fathered her child. He did not however sell the child who was not yet born; he or she was to be returned him when reared. The poet to whom Brocessa was sold, sold her in turn to a Druid, and on his land in a slave’s ramshackle dwelling Brigid was born. The humility of her birth recalls the birth of Christ in a Bethlem stable.

When Brigid duly returned to her father’s household she displayed a generosity of nature. Many legends, which must have had some foundation in truth, tell of her remarkable kindness to animals and of their fondness for her. Put in charge of the kitchen and the dairy, she liberally gave food and her father’s belongings to the poor and she was loved by them for her goodness. Dubthach’s wife accused her of stealing everything in the house for the benefit of God’s poor.
Her father was so annoyed at this that he took her in a chariot to the King of Leinster to sell her. While Dubthach was talking to the king, Brigid gave away his jewelled sword to a beggar to barter it for food to feed his family. The king, a Christian, recognized her holiness and persuaded Dubthach to grant his daughter her freedom. His words are recorded thus “you and I are not fit to bargain about this maiden. Her merit is higher before God than before men”. In a nice touch, and probably a persuasive one, the King gave her father a sword with a hilt of ivory to compensate for the one given away!

Brigid’s status as a free woman now made it incumbent on her to marry. Apparently, she was very beautiful and many sought her hand in marriage. Her father arranged a match but when the-husband-to-be arrived Brigid said to him “I have consecrated my virginity to the Lord, but I will give you advice.” She went on to tell him how he would find a beautiful maiden in the woods to the west of his house who would make him an excellent wife. She promised him a blessing on “his face and speech” when he went to make his proposal. It seemed that nothing could stop Brigid and her heart’s desire which was to establish the religious life for women in the community. Dubthach finally not only yielded to her wish but gave her the means necessary to achieve it.
The eighth-century monk Cogitosus recorded that Brigid placed herself under the care of Bishop Mel and when she took the veil there were seven other girls received at the same time.

Brigid’s first religious settlement seems to have been in Ardagh with Bishop Mel as their patron. From there she went to Magh Aor, but at the request of the King of Leinster, she established a community at Drum Craith about the year 470. In the words of the chronicler “There under a great oak tree which she loved, she built her cell, round which she gathered a the wattled huts of her community.” Hence came the name Cill Dara, or Kildare, the Church of the Oak.
The community at Kildare grew so much because innumerable people both female and male sought out Brigid and as a result, a double monastery unique in Ireland, grew up in Kildare, with a community of monks and a community of nuns. Even more remarkable was the fact that Brigid invited a bishop to take up residence and assist her in all her work. The hermit-bishop who joined was St Conleth. He was a craftsman in metal and was called “Brigid’s Brazier” in old writings. His school of metalwork became famous and his monks excelled in the making of beautiful chalices and other metal objects needed in church. It supplied bells and croziers and sacred vessels to many monasteries throughout the country.

After a long and productive life Brigid died on February 1, 523, and in accordance with her wishes was buried at the right hand side of the main altar of her own church in Kildare. For many years afterwards a perpetual fire was kept burning nearby in her honour.