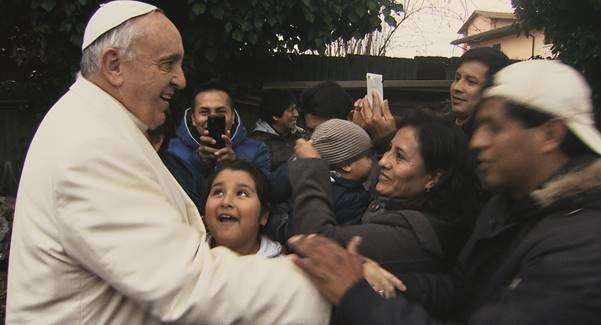 From the very beginning of this documentary film about Pope Francis by Wim Wenders it is established clearly that St Francis of Assisi is the prime inspiration. The film begins with a high angle shot of the village of Assisi and Francis himself is depicted, with scenes from his life shot in black and white.
This is central, not only of course because the Pope took this saint’s name, but because it was this saint who was asked by God to ‘Rebuild my church’. There is a message here as it brings to mind the whole issue of Reform, which is a burning one with regard to the Church in the world at present. And indeed the question is posed ‘How should we live today?’

Pope Francis attempts to answer this in a series of reflections on various issues, in which he addresses the camera in an engaging, even disarming manner. You really cannot help but like him. He is warm and has a great sense of humour, as can be witnessed in an amusing scene where he is questioned by 2 little girls. One asks him why he decided not to live in the Papal Apartments, which brings us neatly to what lies at the heart of Francis’ papacy. He wants to see a poor church for the poor, because poverty is at the centre of the Gospel. Indeed he says Jesus is not there when the Church places its hope on wealth. It is an outrage to see children go hungry when we have so much. Only by taking the gospel seriously can we bring about any fundamental change. This of course is exactly what St Francis did.

Interspersed between the pope’s addresses we see him on visits to various locations. He embraces detainees in a Detention Centre. In Philadelphia he washes and kisses the feet of prisoners. He tells us that when people fall victim to an addiction it is because there is a dissatisfaction in their hearts. At one point the camera places us behind him in the speeding popemobile. As the rain falls and the cheering crowds wave from the sides of the road there is a strange sense of his isolation. He is after all a Pope who has been the subject of much controversy within the Church hierarchy. He dialogues with science; he points to rivalries and vainglory saying there is a need for a self-critical Curia. Listening to one of his speeches the Cardinals assembled around him look somewhat uncomfortable. It is a wonderfully wry moment!

Francis is a busy man. He visits the poor, the sick, refugees, typhoon victims, the U.N. and the U.S. Congress. He challenges us by saying that we do not have the right to be indifferent to the suffering of migrants. It is our duty to stop the arms race which is drenched in blood and all for the sake of money. He reminds us that 80% of the world’s riches are in less than 20% of hands. He has no weapon but words, yet he is careful to point out that we should never adopt a proselytizing attitude. We are all sons of Abraham and Martin Luther and Gandhi are no less loved than a priest or a nun. It is this kind of unexpected statement that sets him apart from his predecessors and generates different expectations.
He worries about a globalisation of indifference in the world. We are not the masters of the planet we are destroying, we are its caretakers. We are plundering the planet; 150 species die every day. He urges us to say no to an economy of exclusion. A spirit of humility might make us more responsible. Part of that is to live knowing you must die because that facilitates wisdom. To be tender is to be strong, not weak. We have so much to do and we must do it together, with a smile and a sense of humour.

Part of Francis’ appeal must surely be that he is humanistic rather than dogmatic and that calls forth the potential for good that is in each one of us. However there is a huge challenge here and it is easy to be captivated, just by the charisma of the man himself, and in the process forget about all the challenges he asks us to face; and they are daunting. In a spirit of hope against many odds it seems fitting to end with the words of St Francis: “Start by doing what is necessary; then do what’s possible and suddenly you are doing the impossible”