In Roman Catholicism we have a tradition of wearing medals and scapulars and venerating relics of the saints.  For many Protestants and others, this can seem strange, even alien.  At best it may seem like worshipping graven images which is forbidden in the Bible and against the second commandment; at worst seeming to believe such things have magical powers…or the other way around!

Catholics use religious articles to remind them of God and as a motivation to willingly serve God and their neighbour.  They are also reminders of the saints (just as a photograph reminds you of a loved one)  and in reminding us of the saints they remind us also of how these saints loved God – such a reminder serves as an example for us to follow.   They show that others have professed the faith long before us and that we are links in a chain that binds us to a rich tradition of belief.    They are an expression and a symbol of our faith and are not mere charms with some magic power to bring us good luck.

The Council of Trent (a meeting called by the Catholic Church as a response to the Protestant Reformation) in the 16th Century put it quite clearly “The images of Christ, the Virgin Mother of God, and of the other saints are kept and honoured…not because it is believed that there is any divinity or power in these images, or that anything may be asked of them, or any faith put in them.  The honour shown to them is really being given to the persons whom they represent.   Through these images…we worship Christ, and not the saints whose likeness they display.”

In many countries it is customary for a person being confirmed in some dioceses of the Roman Catholic Church and in some Anglican dioceses to take a new name, generally the name of a biblical character or saint, thus securing an additional patron as a protector or guide.  I remember after I had made my own confirmation being given a medal with an image of the saint whose name I had taken.  Such medals are usually designed to be worn around the neck or they can be attached to a rosary or key ring.

Actually, the wearing of religious medals is a very ancient tradition in the Church.   Archaeology has discovered medals bearing the images of St Peter and St Paul manufactured in the second century.   St Zeno of Verona (d.371) recorded the custom of giving religious medals to newly baptized Christians to commemorate their baptism and reception into the Church.

In the use of religious medals, the early Church was initiating the practice of sanctifying the pagan practices of wearing amulets or charms.  Pliny (a Roman Author) used the word amuletum for medals worn around the neck by all classes of people as talismans –objects believed to give supernatural powers or protection to the wearer.  Instead the practice of wearing medals for religious reasons reminded Christians of their bond with Jesus Christ.

In the Middle Ages, medals were often distributed to pilgrims who visited sacred shrines such as St Peter’s Rome; Canterbury, England and Santiago de Compostela, Spain.  The use of religious medals as we know them today arose in the sixteenth century. Saint Pope Pius V (1504-1572) began to bless devotional medals in the first year of his papacy.  He blessed a medal bearing the images of Jesus and Mary and this became a custom which quickly spread throughout the Catholic world.  By the 1600s many cities in Europe had their own medals with images of Jesus and Mary or that of a patron saint.  Eventually medals would be made to commemorate places like shrines, important spiritual events like Communion or major events such as an apparition of Our Lady.

The Catholic Church is very clear in teaching that religious medals do not have any built-in power, whether they are blessed or not.  Technically, medals are classified as a sacramental, symbols created by the Church that help the believer recall his or her religious duties.  The medal reminds us of a holy person, which in turn opens us to the grace to follow their example.  The medal itself does not give any help to the believer but inspires occasions of faith and hope in God. 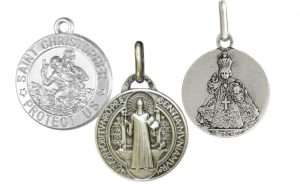 The scapular has its origins in the habits worn by Monastic orders, beginning with the Benedictines.  It was a piece of material, about chest-wide from shoulder to shoulder draped down the front and back with an opening for the head.  At first, the scapular served more as an apron worn during farm work especially.  After the ninth century, a monk received the scapular after the profession of vows, and it became known as the yoke of Christ and the shield of Christ.

Over time, pious lay people who worked closely with the monastic communities adopted a smaller version of the scapular.  This consisted of two small pieces of cloth, joined by two strings and worn around the neck and underneath a person’s clothing.   Eventually these smaller scapulars became marks of membership in confraternities, groups of laity who joined together (e.g. the Third Order of the Franciscans) attaching themselves to the apostolate of a religious community and accepting certain rules and regulations.

Eventually, these smaller versions of the scapular became even more popular among the laity.  To date, the church has approved 18 different scapulars, distinguished by colour, symbolism and devotion.

The 4 most popular are probably:

The green scapular of the Immaculate Heart of Mary given by Our Lady to Sr Justine Bisqueyburu, a Daughter of Charity of St Vincent de Paul .

The red scapular of Christ’s Passion given by Jesus to a Daughter of Charity of St Vincent de Paul in 1846.

The key to the scapular devotion is not simply the wearing of a piece of cloth, but the spiritual conversion it signifies. 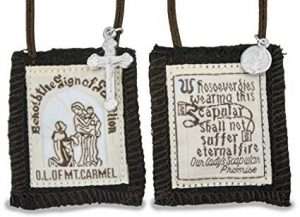 The word relic comes from the Latin relinquo, literally meaning I leave, or I abandon.  A relic is a piece of the body of a saint, an item owned or used by the saint, or an object which has been touched to the tomb of a saint.  The mortal remains of the deceased are associated in some way with the holiness of their souls which await reunion with their bodies in the resurrection.

The veneration of sacred relics has a long history in the Church.  The first Christian reference comes in Acts of the Apostles and explains that handkerchiefs that touched the skin of St Paul while he was preaching in Corinth were able to heal the sick and exorcise demons.  During the 2nd century AD, in the Martyrdom of Polycarp, the bones of the martyred bishop of Smyrna are described as “more valuable than precious stones”.

After the death of Emperor Constantine (fourth century), cases of wood, ivory and various metals containing relics were deposited in altars at the time of their dedication or buried near the tombs of the dead or even worn around the neck.  Altars at the time of their consecration by the bishop were to have inserted a relic of a saint, preferably a martyr, which was kissed by the priest as he began to offer the Mass.

To venerate the relics of the saints is to profess belief in everlasting life; in the Resurrection; the respect which is due to the human body; the special place of the saints who have gone before us, with whom we are in communion and who help direct us on the right road to everlasting life in the Kingdom of Heaven.

Browse our wide range of Medals, Statues and Scapulars in our Online Shop