On 11th February 1858, Our Lady of Lourdes first appeared to 14-year-old Bernadette Soubirous.

Lourdes has since become an impressive place of pilgrimage and is visited by millions of Catholics every year. Many cures have been reported, sixty seven of those have been officially recognised.

In 1992 Pope John Paul II instituted World Day of the Sick to be celebrated each year on 11th February, the anniversary of the first apparition of Our Lady to Bernadette and the first was celebrated the following year in Lourdes itself.

Celebrate this Holy place with this wonderful Nickle Silver medal. It has the image of Our Lady’s face on the front and the back, the iconic scene of the apparition of Our Lady to Saint Bernadette.

The medal is approx  1.8cm in diameter. 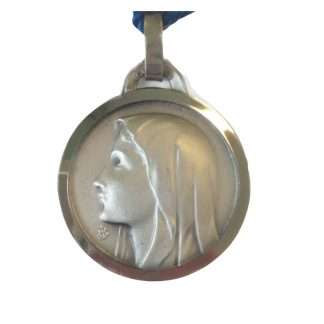