A Dream of Fire: A Story About Dominic Guzman

In this story, A Dream of Fire, Maeve McMahon imaginatively recreates for the younger generation, the life of Dominic Guzman, the Founder of the Order of Preachers.

Dominic founded an Order of Preachers, known as Dominicans, which flourished in the university cities of his time and now, 800 years later, continues to invite men and women all over the world to pray, study, preach and live in community.

Dominic Guzman was born into a noble Spanish family in 1173. His mother’s dream before he was born was a portent of what was to come. Her son would set the known world on fire with zeal for God’s truth, veritas, revealed in Jesus Christ. And he would gather around himself well educated, zealous preachers who would travel on foot preaching about God’s mercy to many who denied, not only the beauty of God’s creation but also Christ’s redemptive death on the cross.

Dominic founded an Order of Preachers, known as Dominicans, which flourished in the university cities of his time and now, 800 years later, continues to invite men and women all over the world to pray, study, preach and live in community.

Maeve Mc Mahon is a Cabra Dominican Sister who was an educator in Ireland and in New Orleans, Louisiana. Her first novel for young people, Riding Out The Hurricane, written after Hurricane Katrina, won the Nautilus Award, in 2010.

Be the first to review “A Dream of Fire: A Story About Dominic Guzman” Cancel reply 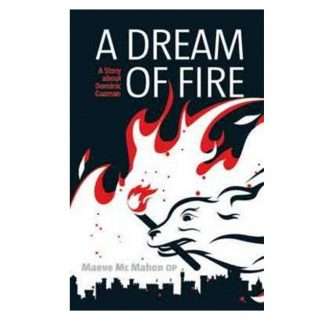 You're viewing: A Dream of Fire: A Story About Dominic Guzman €9.99 (incl VAT)
Add to basket
This website uses cookies to improve your experience. We'll assume you're ok with this, but you can opt-out if you wish.Accept Read More
Privacy & Cookies Policy