There has been a lot of controversy in the media lately over remarks made by the former President of Ireland, Mary McAleese.  On Saturday, November 2nd she told a gathering in Trinity College, Dublin that women were not full members of the Catholic Church, the architecture of which was designed to create and maintain their invisibility and powerlessness.

She backed up her argument by reference to Love and Responsibility a book written by St Pope John Paul II when he was a Cardinal back in 1960.  She has been accused of misrepresenting his views on human sexuality.  This is seen as particularly outrageous because of Mary’s distinguished background in scholarship. 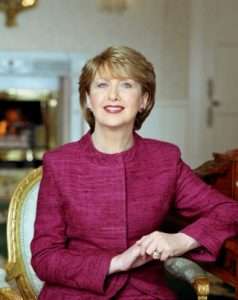 In 1973 and having graduated with an honours law degree from Queens University Belfast,  Mrs. McAleese was appointed Reid Professor of Criminal Law, Criminology and Penology at TCD in 1975.  Aged just twenty-four she was the youngest person to hold the post.  In January 1988, she became the first Catholic and the first woman to be appointed director at the Institute of Professional Legal Studies at QUB, and in 1994 became the university’s first female pro-vice-chancellor.

She was President of Ireland for two terms from 1997 to 2011.  Currently, she is a member of the Council of Women World Leaders, set up in 1996 to promote issues important to women worldwide and equality issues generally.

Last month she was elected unopposed as the new chancellor of Trinity College Dublin. This is quite an impressive C.V. and an indication that Mary McAleese is someone who will influence peoples’ thinking

Mary said that the role of women in the Church was an invisible one.  This in itself as an observation would probably not have sparked outrage, but it was the fact that she referenced writings of Pope John Paul II that did.  As a young bishop, he had written that:

“It is the very nature of the [sex] act that the man plays an active role and takes the initiative while the woman is a completely passive partner whose function is to accept and experience…it is enough for her to be passive and unresisting, so much so that it can even take place without her volition while she is in a state where she has no awareness at all of what is happening for instance when she is asleep or unconscious.”

This, taken out of context appeared as if the Pope had been condoning rape!  Naturally, there was a rush to defend John Paul.  In fact, he was describing a purely biological fact of the act of sexual intercourse before going on to talk about the mutuality of marital love.

In reaction, Dr. Catherine Kavanagh, a philosopher at Mary Immaculate College expressed her deep disappointment at seeing “a Scholar of Professor McAleese’s caliber misrepresent the thought of the late pope who had described a purely biological fact of sexual intercourse, before going on to reject it completely as a paradigm of human sexuality”. 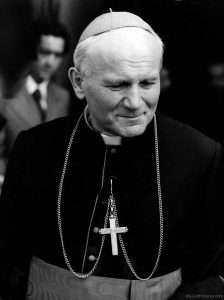 Mary McAleese told the country’s most senior Catholic bishops and the Papal Nuncio that she was being wrongly accused of misrepresenting the former pope’s views on sexual relationships.  She said that in making the analogy she was not talking about the sex act at all but rather about the position and role of women in the Church with men seen as the dominant initiators and women as passive receivers.

After The Irish Catholic first broke the story Mary wrote to the owner claiming that the newspaper “has become a fetid trough of fake news concerning things I am alleged to have said which I did not”.  There followed a full-scale response from the people concerned and a heated repudiation of her accusations.

This has been a most interesting exchange for a number of reasons.  Firstly it is obvious, and has been so for years that Mary McAleese is not happy with the role that women are allowed to play in the Catholic Church.  There are many, including among the clergy, who share this view.

In 2018 she was barred by the Vatican from taking part in a conference to mark International Women’s Day which was scheduled to take place in the Holy See.  Her inclusion was opposed by Cardinal Kevin Farrell, prefect of the Dicastery for the Laity, Family, and Life.

There were no reasons given but it is widely accepted that it was because of her support for the rights of Gay people.  She was openly in favour of Same-Sex marriage in the 2015 Referendum Furthermore she has a son who is homosexual and she has spoken about her hurt with regard to the Catholic Church’s teachings in this area. 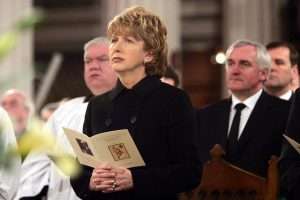 Personally, I think Mary McAleese is not just hurt but also angry.  She is an accomplished and highly intelligent woman who believes it is wrong that women are left out of any real decision-making in the Church.  This is particularly unacceptable to a woman who also holds a Doctorate in Canon Law.

The analogy she sought to make between the image of women’s biological passivity in sex and in their role in the Church was quite thought-provoking.  Where she went wrong was by not clarifying that the sentences she quoted were used out of context.  Putting Pope John Paul in an undeserved negative light backfired badly.

Then again anger does sometimes cloud our judgment!